n Calgary, an involved architect, an enghtened mayor and an active citizenry mbined to save a vital neighborhood rom destruction.

The neighborhood is Inglewood, the un-down business and residential comunity just east of downtown Calgary. n 1969, Jack Long, an architect and urianologist who had recently moved into he area, ran a course on urban planning t Mount Royal College and chose In,’ewood for a class project. For four nonths, students swarmed over the ommunity, asking questions and makng notes. In January, 1970. Planning riass 100 brought in its findings before 00 members of the Inglewood Commuuty Association.

The report showed, what a lot of resilents knew, that the area had a long and ¡onorable history (Fort Calgary was bunded here), and still contained a viible population and a substantial stock >f good housing. But one report also ¡lowed, what few of the locals knew, hat their neighborhood had been writen off by city planners as decrepit, and vas to be carved up by freeways and >iven over to industry.

The newly elected mayor, Rod Sykes, vas in the audience that night. The long, ean, impressive Sykes had been elected o bring an end to bulldozer politics, and ie let the Inglewood residents know hey could count on him. Not only vould he stop the freeways and restore a ;chool threatened with closing, he

vould instruct the city’s departments to work with the community to produce a new plan for the area’s development.

And that’s exactly what happened. With the assistance of Jack Long and his firm, Inglewood redrew itself. Two members of the community association worked out a new freeway route, skirting the community, and using vacant lands and the margin of a railway; their route called for the removal of 12 houses instead of 200, and was estimated to cost $49 million dollars instead of the $61 million listed for the old plan. A gravel pit headed for one corner of the community was stopped, a community information centre was opened, and a series of workshops produced a new plan, which involves doubling the local population — through town houses and small apartments, no highrises — while preserving open space and parklands and replacing heavy industry with lighter industry.

Program funds will be made available for Inglewood and a similar project in Edmonton, and renovation has begun. The plan for the new Inglewood, which was passed by city council in August, carries the stamp of nearly every citizen in the area. “Of course we like it,” says David Lea, vice-president of the community association, “it’s our plan.” ■ 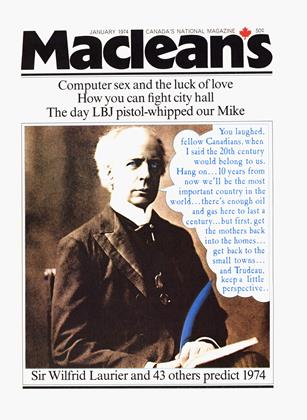