SHOWING CANADA AS IT IS: THE HARD PART BEGINS John Hofsess October 1 1974

“What can I do for you, Johnny?” Mort Margolius leaned back in his chair and did a soft-shoe swivel from side to side. Immediately upon being introduced he changed my name to Johnny. He brushed something invisible from the sleeve of his $300 suit. Every seam was straining and heaving like a dam about to burst. “Lenny-baby, how was Bermuda?” he’d say into the telephone. “Sol-baby, how are you?” he’d begin another conversation. The president of Ken Films was a master of the hearty cliché.

“Fve just seen a great Canadian film,” I told him, “Claude Jutra’s Mon Onde Antoine." He winced. Or else the sun hit his eyes. He sat up and began looking down a column of figures, slowly tracing each line of it with his thumb. “Speak up,” he ordered.

“Claude Jutra needs a distributor for his film. I saw a rough-cut in Montreal last week. It’s up for grabs.” It was May, 1971. The film had already sat shelved for four months in need of distribution.

He pushed an intercom button and dictated a fast memo.

“I’m going to tell you something, Johnny.” He already had my rapt attention but he pointed at me anyway. “I’ve been in this business for 42 years. I’ve seen a lot of good films fail and a lot of bad ones succeed.”

I was going to commiserate with him for having had a life so riddled with irony.

Then I realized he had divulged his basic business ethic.

“Johnny,” Margolius remarked, “when you talk film to me you have to know what you’re talking about. I haven’t any time for this artsy stuff.”

“I’ll tell you something Johnny,” he repeated, “I don’t think very many people are going to go to a film with a title like that. That’s my opinon, and that’s based on 42 years in the business. You should tell what’s-his-name, to enter his film in a festival. As it stands, it’s an unknown film by a nobody.”

Mon Onde Antoine went on to become'the most acclaimed and popular Canadian film of the year. It was not until it became an established movie that Margolius bothered to see it. “A nice little film,” he once said to me. That was his only comment.

Discussions about the future of Canadian movies often sound like the Tower of Babel on a busy afternoon. But what is there to dispute?

We can make films here with American stars. We can universalize all a plot’s particulars so that Canada becomes known as the place that looks like anywhere, everywhere and nowhere. We can blend ourselves into America’s melting pot and disappear altogether. We may sell some of these perfectly homogenized Canadian-American movies, even have a few hits in the lucrative U.S. market, but why not just buy shares in Paramount and be done with it?

The alternative may not pay as well immediately, but it represents a long-range investment in Canada’s future. It’s the choice made by those who want to see Canada have more 104

than a branch plant film industry — a film culture, quite a different thing. We have not been failing for years — as some allege — when films such as Mon Oncle Antoine, Act Of The Heart, The Rowdyman, Wedding In White and Kamouraska, among others, lasted only a few weeks in their U.S. engagements (or else didn’t secure any bookings at all). The fact is an authentic Canadian film would be as unappealing to Americans as black movies are to whites, or Québécois films are to most English audiences. Our best films express different themes, different dreams and are made with a different sensibility than can be found in American movies. They have deep roots, and they have them here.

It is no doubt a sign of progress that Claude Jutra’s films don’t have to be peddled in a begging manner anymore, but there is always a new group of worthy unknowns who still go the rounds of knocking on doors, fighting for recognition. Paul Lynch’s The Hard Part Begins, a first feature produced for $95,000 under the CFDC’s low-budget plan to encourage new directors, is a marvelous piece of work. Life in Ontario’s Ozarks isn’t exactly my favorite subject, so this movie about Jim King, a rambling country-and-western singer who plays a circuit of small towns, and who at age 40 finds his past catching up with him, mostly in unpleasant ways, had a lot to do to win me over. It succeeded mainly through its thoroughly convincing performances by Donnelly Rhodes, Nancy Belle Fuller ( see above) , Robert Hawkins, Doug McGrath and David Daniels, all of whom make their presence felt. A low budget tends to overwork the talents of film directors; it’s an excellent test of their probable future merit. In making The Ten Commandments showman Cecil B. De Mille could afford to make numerous errors (with miscast wooden actors speaking laughable lines) just so long as somebody got the Red Sea to part impressively. On a bigbudget film, where an army of craftsmen go to work (and a certain percentage are bound to do their jobs well) almost any film will look good in some respects and have passable entertainment values. But in making a feature such as The Hard Part Begins, scriptwriter John Clifford Hunter and director Paul Lynch had to make dozens of decisions exactly right in order to maintain one’s interest and respect. There are no floods, earthquakes or fires to save the film on the basis of special effects if the dramatic parts were done badly. It succeeds simply as a modest human drama of great integrity.

If a Canadian film is indistinguishable from an American film — if, that is, it could just as well have been produced by Paramount’s Bob Evans — then we still don’t have a film industry, even in 1974. We need to get our priorities straight. What we don’t need is more capitulation and cultural schizophrenia; more people, whether in politics, industry, sports or the arts, who sell out and call it success. 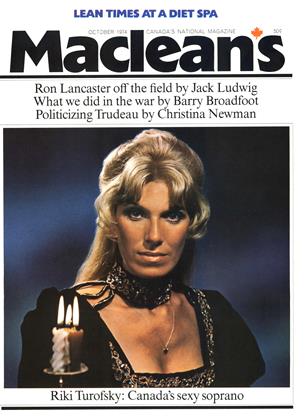