In embattled London back in 1941 a Canadian third secretary confided to his diary, “I suppose I ought to cultivate the society of solid civil servants instead of rococo Romanian princesses and baroque dilettantes.” That junior diplomat was Charles Ritchie, a Nova Scotian who later became Canadian Ambassador to Washington and High Commissioner in London. Now he has published his “undiplomatic diaries” for the years 1937-1945, under the title The Siren Years (Macmillan of Canada, $10.95). For most of that period he served as private secretary to Vincent Massey, then High Commissioner in London. Second in command was the future Prime Minister, Lester Pearson, and both men were to publish their official memoirs. Ritchie refrains from adding anything official to what his chiefs have said. What he does tell us about, with a candor unmatched in the memoirs of other public servants, is Ritchie himself. Off duty, this third secretary burned with a hard gemlike flame in some of the best boudoirs in the land. The sirens of his title are not air-raid sirens.

Ritchie is a born diarist with an acute and original mind and a sensitive eye. In 1942 he found Massey a curious and fascinating character, “that blend of acuteness and superficiality. He has enormous susceptibility to the more phony forms of charm. What he loves in life is delicatezza — the pleasant surface style.”

Ritchie too is in love with style, but his passion (like Massey’s) is complicated by a habit of detachment. A Canadian, he remains alien at heart as he orders a chop at the club or strolls on the lawn of a stately home.

The same detachment troubles his love affairs. With the women who share his leisure hours he remains uncommitted. One of his adventures is sheer comedy. The siren is an American ballerina, beautiful but, in the young diplomat’s eyes, dumb. “If that bloody ballerina does not come across tomorrow I am through with her,” he writes, exasperated. “She gave me a model of Our Lady of Lourdes today, but she seems to be getting colder the fonder she gets of me.”

He seems to have met his match in Elizabeth Bowen, the Anglo-Irish novelist with whom he formed a passionate friendship. “The first time I saw Elizabeth Bowen I thought she looked more like a bridge player than a poet,” he wrote in September, 1941. “Yet without having read a word of her writing would one not have felt that something mysterious, passionate and poetic was behind that worldly exterior?” One would, obviously. Before long he is quoting her as a literary mentor, “Elizabeth says that T. S. Eliot told her that without alcohol he could never have got in the mood for his poems. That is good news!” And then, “Elizabeth came to see me in the morning and brought me a cyclamen.” Ah, these thrifty Irish Protestants! They walk among the flowering shrubs of Hampstead talking of Virginia Woolf, watch the swans in Regent’s Park, lunch at the Ritz. By September 1942 the novelist has become “dearest Elizabeth to whom I owe everything.” Some time in 1944, she disappears from the diary.

A postscript to the book tells us that Charles Ritchie has

been happily married to his wife Sylvia for more than 25 years.

Ritchie's sophisticated self-âvtfareness is revealed in a wry entry describing a dinner with the Masseys in April 1942. One of the guests was “sitting in a bath chair with her feet dangling on a footstool. Her small hands covered with diamonds, and with her painted face — she looked like a monstrous baby — something in Grande Guignol . . . She is a lowland Scot, and the lowland Scot from Boswell on is the most insatiable animal on earth when it comes to worldly glitter and bustle. I should know — I am one.”

The quest for wordly glitter brings Ritchie into the company of many famous British personalities; George VI, Lady Margot Asquith, Lady Diana Duff Cooper, the Duke of St. Albans (who said, “I hate all the Europeans, except Scandinavians ... of course, I loathe all dagoes”), the Sitwells, Field Marshal Sir Philip Chetwode, the present Queen Mother, Princess Anne-Marie Callimachi and many others.

The Siren Years is an enjoyable hour or so of gossip with a man well worth knowing for his own sake. Heavy political commentary it isn’t, but we’ve had more than enough of that in Canada. It's nice to know that under the stuffed shirt of at least one of our envoys there beats the heart of a poet, a hedonist and a congenital ironist. I hope there will be more diaries from Charles Ritchie.

The Fatal Woman by John Glassco (Anansi, $3.95) is a sequence of three long stories on the theme of the cruel female, glittering with the brilliance of the best living pornographer and one of Canada’s finest and least known poets. Conceived as tales utterly divorced from reality, stories where nothing happens, The Black Helmet, The Fulfilled Destiny Of Electra, and Lust In Action are three variations on Glassco’s lifelong obsession, the fatal woman.

The Black Helmet, presented on two planes, human and divine, is richly romantic and sensuous. It’s a kind of footnote to Glassco’s infamous anonymous novel, Harriet Marwoocl, Governess. The Electra story recalls Nabokov’s Lolita, though written years before it, in its deliberately shocking irony. The third tale, a satirical treatment of the theme, is set in the future. Women have all but eliminated men, castrating at the age of 20 all males that remain. Two maladjusted boys armed with obscene writings are trying to break out of jail. They are foiled by the beautiful Lesbian detective Marian Hope, whose mission it is to have them “altered.”

Such tales will be read with enjoyment long after the earnest writers of the hour are forgotten — but they are not for simpleminded readers.

Will some kind person please give Charles Templeton a big kiss? He seems to be trying very hard to attract attention. His last book was called Jesus, a crack at the market preempted by Matthew, Mark, Luke and John. The new one is The Kidnapping Of The President (McClelland and Stewart, $8.95) which tries to go one better than The Day Of The Jackal. But Templeton is not a storyteller and his thriller is the work of will rather than imagination. 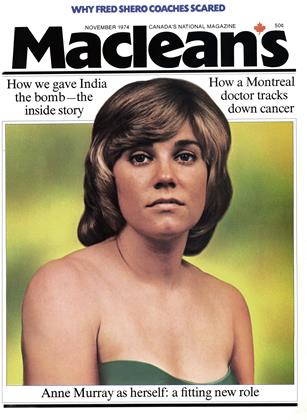