“Poverty,” wrote George Orwell, “is merely squalid and boring.” But then George Orwell never did look on the bright side of things. Now, come the recession or depression or whatever they’re quibbling over calling it, can we not look

forward to a little destitution with elegance? Does down necessarily have to be out? Here are four cases of poverty with panache — each purely by choice. And who knows, the rich too may soon be clamoring to get in on the trend.

Qetting By is the Best Revenge

“Even when I’m down and out I try to do it with style,” says Dr. Brute, once better known as Eric Metcalfe, of Vancouver. Certainly few could argue as they see him lead his Brute Band of wooden leopard-spotted saxophones through Pennies From Heaven while dancing for quarters on the sidewalks here below. In top hat, tails and white gloves, Dr. Brute has come a long way from the ivied private schools of Victoria where he was once an establishment scion and aspiring artist, before deciding that the affluent life “all seemed like an unreal world to me.” Now, surrounded by Lady Brute, Flakey Rose Hip, Mr. Peanut and (above left) Marcel Idea, he lives on $3,500 a year in the leopard-spotted reality of an east-end former Knights of Pythias Hall dubbed the Western Front where, at 34, he has created a work of art

out of his very own life. All it costs is time, talent, $ 150a-month room and board and whatever the Salvation Army can offer in the way of leopard spots. “I haven’t bought anything new in years, except food,” says Dr. Brute. Even some of that comes in the form of fresh oysters dug from the BC beaches, fresh chanterelles plucked from the forest and bulk grains bought for Dr. Brute’s excursions into gourmet Indian cookery, or as he likes to call it, Gunga Din-Dins. Entertainment is never a problem what with nightly multi-media shows and annual Dada conventions down the coast in Hollywood’s Elks’ hall. “The real world is a very depressing place right now,” says Dr. Brute. “It’s very important to live out your fantasies. I think we’re better prepared for the depression than most people are.”

Jill Robinson is a triumph of yesterday’s chic. Her tealblue velvet gown is straight out of The Great Gatsby — and somebody’s attic. Her fox-collared cardigan straight out of Vogue — and her grandmother’s garbage bin. With a five-dollar gold-tipped walking stick, Ms. Robinson has a style that is starting to sweep the streets of Halifax — that is, if it hasn’t already done so once or twice before over the years. So impressed was the Nova Scotia Festival of the Arts that this summer they asked her to stage a fashion show of old clothes. “You can take old slips and put rhinestone straps on them for evening gowns,” she says. “Put buttons on old bed jackets and wear them as sweaters. I bought a full-length bear coat that cost $30 — very Diaghilev. The things in the past are so much nicer.” Not to mention cheaper. As she says, “For 50 cents you can walk out looking like a queen.” A 28-year-old English graduate, Ms. Robinson once worked in New York, then wrote commercials. “But the things you have to do for the money,” she grimaces, content now with her $4,500 a year free-lance writing for the CBC and Halifax’s weekly Fourth Estate. With a music student named Peter Mushkat, Ms. Robinson makes her home in a former dollar-a-night flophouse built circa 1820, now restored to Victorian elegance through the labor of her 14-year-old sister and a friend for a dollar an hour and all they could eat. Inside,

it’s transformed with junk-shop finds, cast-off antiques and her own creative carpentry and upholstery. “I work on the premise that if somebody else can do something, so can I,” she says. Accordingly, she also grows her own lettuce under lights in the basement, her own sprouts in a closet and makes her own rosehip jelly, blackberry cordial, cheddar and cottage cheese. At frequent dinner parties, the fare runs to Japanese or other improvised ethnic — and never more than $10 for six. “You never use much meat,” she says, “and everybody thinks it’s very exotic. If you economize on food, shelter and clothes, thçn when it comes to luxuries you can afford them.” Regulars at the opera, ballet and theatre, Ms. Robinson and Mr. Mushkat always try to get in free by getting commissioned to review the performance. They collect their original period posters at discount prices by helping out part-time in an art gallery. “Those are the things we won’t give up,” she says. As for unearthing what others have already given up, she haunts rag merchants and church rummage sales. Come February and the doldrums, not to mention a certain shortage of cash, Ms. Robinson sells whatever in her wardrobe she’s tired of. “It’s living close to the edge,” she says. “But it’s kind of a rush wondering where your money’s going to come from. You have to be very patient and have practically no pride. I’m the definitive scavenger.”

“The dollar goes much further in a group,” says Louis Capson. In fact, for Mr. Capson’s 12-member nonprofit theatre commune called Creation 2, it goes all the way from a modest $750-a-month mansion in Toronto’s tony Annex area, where gala group dinners are served up under rococo ceilings, to a comfortable $250-a-month studio retreat in Rosedale, just across the road from former Governor General Roland Michener’s house. At $15,000 a year for food, shelter and general living expenses, or slightly more than $1,000 a head, it definitely goes to prove that life can be cheaper by the dozen. “We do have a good life together,” says company artistic director Capson. “None of us could live this well on his own.” A Master of Fine Arts from Yale, Mr. Capson doesn’t find himself in his current stylish poverty purely by a twist of fate. The fact is he planned it just this way. “All of us come from more affluent backgrounds,” he says. “But we were looking for an alternate way of doing things. This is more a lifestyle than an occupational relationship.” It is also, as he sees it, “the only way to avoid the star complex.” Here everybody gets the same salary — nothing — from the common pot of grants, charitable gifts and box-office receipts that finance the company’s six annual productions. Each actor gets equal billing — whether it’s on the stage or at the kitchen sink. The same flourish goes into transforming a

role into a tour de force or the week’s marketing coups into clam chowder, quiche Lorraine and coq au vin. “Sometimes we cook with wine,” explains one of the group, “because you’d never want to drink the stuff we can afford.” Each Tuesday morning a member of the company leads a shopping expedition to Kensington Market where bulk-buying has been refined to a bravura performance. Days of detective work go into stalking the elusive 57-cent-a-pound hamburger, eggs at 50 cents a dozen and the best in day-old bread. Menus are carefully scripted with a view to return engagements, prompting such clever repartee around the dining-room table as “Guess what the meat loaf was before?” Occasionally there have been known to be Christmas dinners for 40, Indian feasts for 20 and troupe trips to Stratford. Sartorial finery for such events can usually be accumulated by a quick raid on the third-floor costume closet or the pooling of all shirts, ties and jackets from former lives. Forays to fellow underground theatre companies are usually arranged after a call ahead for complimentary tickets. Movie outings materialize, says Mr. Capson. “with a little help from friends.” Although he sees “no hint of affluence on the horizon,” he hopes things stay that way. “We had a LIP grant one year that gave everyone an allowance of $15 a week,” he says, “and it really pulled things apart.”

A Way with Local Trash

Billy Georgette was born 38 years ago in Montreal’s uppercrust Westmount — approximately 16 blocks and several light years from the St. Urbain Street ghetto where he now resides. On $4,500 a year, Mr. Georgette, his lady, Suzanne Perron, and their two children, ZebuIon, two, and Willo, 10 months, enjoy a lifestyle that is the envy of their friends among the hoi polloi. Intimate candlelight dinners for two on dainty pork roasts with peaches — his specialty; exotic feasts of tacos for 15 under $10 — live entertainment provided by the host at the piano, and winters in the south; all have convinced Mr. Georgette there is no need of nostalgia for the good life back up on the hill. “No way,” he says. “This is the good life down here.” A sometime piano player — more sometimes than other times — he admits, “I could be working full-time if I wanted to travel with a band. But I’ve chosen not to. There’s no point in having kids if you’re not going to be around.” He prefers to spend his time combing the ghetto’s Greek and Portuguese street markets with cunning for the perfect bargain hamburger, the crème de la crème of cut-rate vegetables and fresh-baked challah loaves. Ms. Perron has a way with local trash. A rocking chair scooped from a neighbor’s garbage is now beaded and macraméd back into a masterpiece. A table found abandoned in the back lane is now stripped down to glowing oak. The walls of their

elegant $110-a-month walk-up are sprinkled with hangings and woven chandeliers she whipped up out of wool remnants, old rope and copper tubing from the salvage yard. She trades off her creations for free babysitting from the neighbors, her bicycle for their couturier skills. Not infrequently, a crêpe Bretonne from the chef downstairs, their landlady, finds its way discreetly to their door. “Here people share, exchange things,” she says. “It’s time-consuming — but me, I like it that way. Poverty’s a thing in your head. All you need is some imagination. You can always make your life interesting.” Two years ago the family wintered in Florida for three months, motoring there in their yellow-and-whitetopped ’66 Dodge Fargo panel truck bought for $225 complete with a style all its own. “It looks like an egg,” says Ms. Perron. Their days basking in the Florida sun went uninterrupted until cocktail hour when Mr. Georgette retired briefly to a piano to play for grocery money. Their nights were spent crashing in a cosy home-away-from-home belonging to an art teacher they met in a bar. Evenings on the town back in Montreal are carried off in clubs where they feel no compunction to indulge in anything more than the music. From time to time they dine in some small restaurant carefully searched out. “If it got any better, we couldn’t stand it,” says Mr. Georgette. “We’re slum princes here.” O 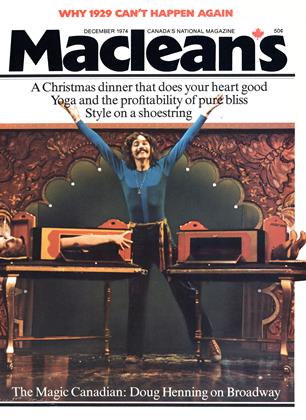