The weekly entertainment newspaper Variety (which is known in the trade as “the Bible of Show Business” but is so filled with unverified claims and hyperbole that Apocrypha would be more apt) devoted an issue last November to Canadian films in which it was asserted that Ivan Reitman’s Cannibal Girls (a cretinous home-horror-movie that most of you, judging by the Canadian box office receipts, had the good sense and fortune to miss) would probably gross $650,000 in North America, making it the most profitable English - Canadian made to date.

There’s no need to reach for the Alka-Seltzer (not yet) because the story is untrue. Cannibal Girls (it is claimed) was Big Bertha at the driveins even if it was Tiny Alice in the cities. Since many of the drive-ins and small towns do not report weekly grosses to Variety, for inclusion in its 50 top-grossing films chart (a weekly index which Cannibal Girls reached only once, and very low, in 1973, and then only in the company of a double billed film called Raw Meat) no definite figures are ever likely to be published. But one thing is clear; if after a showing at one of those drive-ins, the lights had gone on and an announcer said, “And here, dear people, in the yellow spotlight is the director of the film you’ve just seen .. .” there would have occurred the fastest hitand-run on record. No matter what money Cannibal Girls earned, it earned it shamefully and shoddily.

What makes the claimed success of Cannibal Girls annoying is that 1973 was the year in which one of the finest Canadian films made to date, Don Shebib’s Between Friends, met with financial disaster. It’s sad enough that such a fine film should fail to draw audiences (perhaps the theatre locations were bad, perhaps the advertising campaign lacked pizzazz; the collapse of the Canadian Film Awards certainly didn’t help) without having it said with a cynical, cockcrowing smugness that the bad always drives out the good, and the public doesn’t deserve anything better.

to be seen. It would be fitting to introduce Vancouver film director Jack Darcus with a fanfare of trumpets, a roll of drums, a mighty sound of some kind. His film Wolf Pen Principle is convincing proof that Darcus is the real McCoy, an original artist whose vision of life is penetrating and disturbing.

His first two features, Great Coups Of History and Proxyhawks (Darcus, alas, does not have a winning way with titles) cost $6,500 and $16,000 respectively, were shot in black-andwhite 16mm, and have been rarely seen outside film-buff societies. His new work, in color, costing $100,000, most of it invested by the Canadian Film Development Corporation, is his breakthrough movie. The first two films may with great justification reach their widest audience to date if and when Global Television purchases them for its Canadian film series, but Wolf Pen Principle should receive national, theatrical distribution during 1974, making it for most filmgoers their first opportunity to meet this distinctively talented new director.

Judged by current film costs, Darcus’ budgets appear absurdly low. But as if to prove that genius does cheaply and imaginatively what mere talent does expensively and routinely, it would be wise to remember that Claude Jutra’s first (and personal favorite) film A Tout Prendre was made for $25,000 and Don Shebib’s Goin’ Down The Road cost $87,000. Darcus’ Wolf Pen Principle rightfully belongs in such company.

The film stars Vladimir V a 1 e n t a (who portrayed the station master in the Oscar winning Closely Watched Trains. He was born in Czecho-

Slovakia and now resides in Edmonton) as Henry Manufort, a theatre manager, who well on into middle age is facing the turning point of his life. He feels trapped in every area of his existence, his marriage, his home, his job, and only at night, when he is alone and visits the zoo to be with the wolves he has befriended, with whom he identifies and about whom he fantasizes, does he feel anything like peace or contentment. He becomes acquainted there with a young Indian named Smith (portrayed by Lawrence Brown) who wants to free the wolves as an act of social protest. But the wolves, as it turns out, have a will and way of their own, and both characters, so obsessed with their personal views and relationship with the animals, meet with a profound defeat. The plot is something but it’s not everything. Darcus is a former painter, and it is primarily the supernatural eeriness of his films that one remembers intensely; they have a distinctive look and mood that comes only when all the variegated aspects of a film production are in masterful control. Wolf Pen Principle is not likely to raise a storm at the box office. It has no sleazy sensationalistic aspect for ad writers to exploit. In view of the difficulties of Between Friends (and it’s even rumored that Kamouraska may never break even), the film may be chalked up as a loss. But it is no loser. Wolf Pen Principle is a brilliant film, an inspired and dedicated film, made by a director who really cares about the medium and its audiences, and is determined to give those audiences the best of which he is capable. It is now the filmgoers’ turn to prove by their support that sometimes the good drives out the bad, and that they do know the difference. 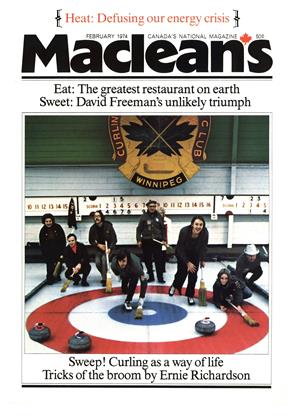