Tripping out with Sonny and Cher HEATHER ROBERTSON March 1 1974

An unexpected pleasure of the current season is the emergence of a new kind of television woman. She’s a scamp, a camp and a bit of a tramp, she is a V-A-M-P, VAMP. Cher sings it and Cher is it, the Dark Lady, the Hollywood sex queen, tough, cool, egocentric with the casual cruelty of a black widow spider. Undulating her magnificent body in a dress cut down to the navel, slowly running her tongue over the tips of her teeth, brushing her black hair from her face with a single catlike gesture, Cher projects a reckless sensuality which hasn’t been around since Marilyn Monroe, who was also a very funny lady. Cher’s style and dazzle make all other TV comedians instantly old and irrelevant. Her show, The Sonny And Cher Comedy Hour (CTV — Sunday, 7.30 p.m.) breaks through the old vaudeville routine of TV variety to become a kind of pop art.

Cher is not a new woman as much as a lacquered reincarnation of the stars who reflected the more liberated years of the Second World War — Katharine Hepburn and Lauren Bacall — women whose sharp tongues and hard edge of bravado, wit and total self-confidence made them suspect in the big-bosomed Fifties. Cher has the same cynical smile, the ironic laugh in her eyes, the low voice and perfectly timed put-down, the quality of world-weary independence and intelligence that makes her sexier and funnier than the scatterbrained housewives we’ve been laughing at for 20 years. Sonny and Cher don’t do domestic comedy, or if they do, it’s a send-up. Cher’s marvelous Laverne at the Laundromat sketch is, on one level at least, a satire of Lucille Ball. The dominance of the zany redhead is over.

Cher’s powerful voice and magnificent television presence — proof that a woman doesn’t have to be ugly or hysterical to amuse — have already had important implications for TV variety. Carol Burnett has learned to sing and had her face lifted, neither very successfully. More significantly, she has improved immeasurably as a comedian, developing a new understated style and subtlety of expression, a disciplined self - control and

delicacy of gesture which bring her performance closer to theatrical comedy than to nightclub routines. She has virtually jettisoned all her domestic slapstick and presents material which is not only more up-to-date but more complex and intelligent. Her new face and vamp wardrobe give her a broader choice of characters — she has done a fine parody of an aging movie queen — and the more sophisticated writing allows her to explore nuances of pantomime which depend on her own skill to create a mood rather than a pratfall or stock gag. Yet, fearful of competing with Sonny and Cher for the hip audience, The Carol Burnett Show (CBC — Thqrsday, 8 p.m.) has opted to corral the rqiddle - aged by bringing back the blockbuster torch singers of the Sixties and those big dance numbers with 50 girls in pink chiffon being carried around the stage by serious young men in tails in some dreadful parody of the senior prom. With this pathetic attempt at glamour and flash, The Carol Burnett Show still carries the unmistakable vulgarity of domestic America.

Most of the jokes on The Sonny And Cher Comedy Hour afen’t all that funny — some, in fact, are real groaners — and it took me a while to figure out why I found the show so much fun to watch. It radiates a kind of relaxed exuberance, an easy, good-natured high. And that’s it. If Sonny and Cher aren’t stonecj when they do their opening number, they sure seem to be, and so does the studio audience. The whole show is put together like a good dope trip. Everybody is up, high-flying on the mp^ic, happy in the invincible power of their talent and charm. It’s the one show on television which has to be watched in color — Cher in white on a white background with blue eyelids and a scarlet mouth, Big Bad Leroy Brown sung to an animated cartoon, black musicians in orange on a pink background, Cher reproduced five times in different costumes by the use of chroma key, a device which gives the television image the depth of multitrack recording — it’s a stunning use of the medium, an exotic exercise in color, shape and free association, an adolescent fantasy in which nothing is important and everything is amusing. The sensuous stimulation is so complex and skillful, the illusion is so complete that you lose your sense of distance from the performance and become emotionally a part of it.

The Sonny And Cher Comedy Hour expresses in a way no other program has done the possibilities of television as art, a medium which is

beyond morality and politics, which is all style and no content, which exists simply to enchant and entertain. Like the commercial, it depends for effect on the enclosed and controlled universe of the TV studio, an environment which gives it heightened, superreal intensity. The mind-tripping techniques of The Sonny And Cher Comedy Hour will hopefully precipitate a creative surge in TV variety and drama. For serious television, it demands not a flight into fantasy but a redefinition of reality. 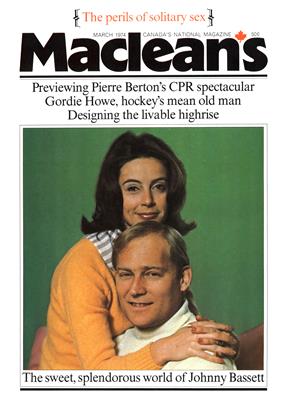