Every now and then, something happens that defines the difference between the Canadian and American systems of government, and reminds us that power moves in quite different ways in the two national capitals. In Ottawa, power moves outward in concentric rings from the centre; in Washington, it moves through a labyrinth and may pop out anywhere. In the Canadian capital, action can be taken, by and large, only through the cabinet; in the American capital, the executive branch, Congress, an individual senator or even a senior civil servant can act independently. We know the difference in theory, but in practice, we often forget, and are often misled.

Consider the case of Senator Lawton Chiles, an ambitious Democrat from Lakeland, Florida. In January he went back to Florida on a fencemending trip and found that his constituents were pretty damn mad about the shortage and high price of gasoline. He got one letter that said, in part, “You got no guts or you would have done something about this . . . Put your action where your mouth was!” That’s the kind of missive that sends a chill up any politician’s spine, but what to do?

used to being railed at — so he decided to attack Canada. His foreign affairs aide, a bright and personable young man named Colin Bradford, told him that Canada had raised its oil prices, through an export tax, from $4.66 to $10.66 a barrel since September. It was true, Bradford noted, that no Canadian oil goes into Florida, and so Canadians could hardly be blamed for the shortages and prices there; on the other hand, the Canadian energy minister, Donald Macdonald, was about to visit Washington, so that any attack on Canada was bound to make the news. This would let the folks back home know that Senator Chiles was on the job. (I am not making any of this up, I am reporting the scenario sketched out for me by Senator Chiles’ aides, who were proud of it. Colin Bradford told me that “Had somebody else been coming to Washington, we would probably have attacked some other country; this was not an anti-Canada thing, it was a domestic thing.”)

Accordingly, the Senator drew up a resolution, “That it be the sense of the Senate . . . that the United States views with utmost concern recent oil price increases and that such actions by these countries should not be taken without regard ... for the possibility of reciprocal action by the United States.” When he drafted the resolution, Senator Chiles, as Bradford noted, “let himself go on the language” with a view toward exploiting Macdonald’s visit. He said, “Many Canadians carp and complain about how much power and influence the United States has over their lives. Now they are in a sense hijacking six million dollars a day out of our pockets .. . There is just no way that I can see that Canada can take a unilateral action as it has, with total disregard for the power we have to strike back at the jugular of some of Canada’s industry.”

The results of this rhetoric were gratifying. A warm glow emanated from the letters and editorials back home, and Canada leapt like a stuck pig. Macdonald allowed that he thought Chiles’ understanding of Canada’s oil situation was deficient, and while our editorial writers writhed and flashed angry adjectives, he went on Canadian TV and before Canadian audiences to explain the price hikes.

In due course, William Simon, the American energy czar, announced that he was satisfied with Macdonald’s explanation of the increases, and everybody on the Canadian side relaxed. Our ambassador, Marcel Cadieux, sent along a note to Chiles ask-

ing if he could drop over to explain anything, but Chiles said no thanks.

There was general agreement, in the press and among our' diplomats, that Macdonald had covered himself with glory and put Chiles in his place.

So we can all relax. Well no, not quite. On February 4, the day the Globe and Mail trumpeted, Macdonald scores a major success, Chiles introduced a bill into the Senate, where it was speedily referred to the Committee on Banking, Housing and Urban Affairs. The purpose of this bill is to amend the Export Administration Act of 1969 to allow the President to impose export controls “when necessary to bring about adjustments in economic policies or actions by foreign countries.” This was no senseof-the-Senate rhetoric, this was a proposal for action. The Export Administration Act is up for renewal on June 30, and this bill, if passed, could be in place next fall. It would allow the Americans, if they wanted to persuade us to bring down the price of oil, simply to block all shipments of coal, or beef, or computers, or anything, until we came to heel. This bill is precisely what Chiles called it, a kind of “nuclear capability” for use in an economic war.

But it produced no reaction whatever. Our press, diplomats and politicians all appear to have taken Simon’s statement as the end of the Chiles Affair — in Canada, such a statement from a man of cabinet rank would have ended it — but Washington is not Ottawa, Simon does not speak for the U.S. government, only for one branch of it, and the Chiles affair is far from over.

It is interesting and ironical that we started like a frightened fawn at the shadow of Chiles, but now that he stands behind us hefting a sockful of wet sand, we are staring, with a fixed smile, in the opposite direction. 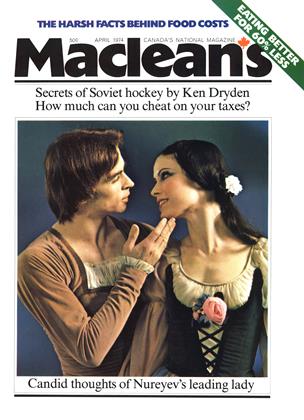