Mayor Rod Sykes of Calgary is the best mayor in Canada, and Leonard Jones of Moncton is the worst — at least according to the readers of Maclean’s. Sykes, say the Calgarians who sing his praises, is concerned, intelligent, active, outspoken and “really cares about people”; Jones, in the view of some of his fellow citizens, “gives the impression of caring very little for the general well-being of citizens in his city.” There are some naysayers, a handful of Calgarians who find Sykes overbearing and cantankerous (one reader suggested that “he is the only man in Canada who knows anything; if you don’t believe it, just ask him”), some Moncton folk who find Jones dedicated and sincere (“he is staunch enough to hold the line against frequent vicious and unwarranted attacks on him, especially from unqualified, jealous troublemakers”) but, by and large, the readers who voted agreed about the merits of the one man and the shortcomings of the other.

These findings are the result of a survey which grew out of a half-page ad tucked into the back of the January issue of this magazine. The whole thing began innocently enough; we wanted to find out which municipal leaders in Canada were doing a good job, and which were not, and the simplest way to

do that seemed to be to ask our readers to pick the mayors they think are the “best” and the “worst” in the country, and to tell us why they feel that way.

Frankly, in a project of this kind, we were expecting perhaps a few dozen responses; after all, this was not a passive poll; the readers had to clip out the ad, fill it in, add any pertinent information and send it off to us, paying for their own stamps. To our astonishment, we received 339 letters from across the land; some were handwritten, many were typed, some merely filled in the coupon, many added page after page of comment. We got nominations from every major city except St. John’s, Newfoundland, which was surprising in view of the usual turbulent state of that city’s politics, and from dozens of small cities, towns and villages. We even got one nomination from a Prairie town where the mayor was put up for the “worst” category because “he burned down my house,” which seems a sound ground for criticism.

Before sorting through our letters, we decided we had to weigh the voting according to the size of the municipality. Obviously, 20 letters from the city of Toronto were not as significant as a similar spate from Moncton. So we divided the popu-

lation of every city into the population of Montreal (1,214,000), our largest city, to get a ratio, and then scaled that ratio backward to account for such factors as Maclean’s circulation in various areas. Then we counted our letters and found that the ratios didn’t matter a damn in the “best” mayor category; in absolute numbers, we got more letters (26) in praising Rod Sykes of Calgary than anyone else. In the “worst” category, we got more letters condemning Jean Drapeau of Montreal (39), but Leonard Jones was a strong second (20) and, considering the disparity in sizes — Montreal has 26 times the population of Moncton — we had no hesitation in selecting the New Brunswick mayor as dud of the year.

There were other surprises for us; one of the most pleasant was the number of outstanding lady mayors we have in Canada. Jane Bigelow of London, Ontario, who was neatly summarized by one worshipper as “cool, concerned and clued in,” led a strong contingent of women from such far-flung cities as Wallaceburg, Ont., and Dartmouth, Nova Scotia. We even got one vote for Charlotte Whitton of Ottawa, who stopped being mayor there in 1964, but whose memory obviously lingers on.

The qualities that drew admiration were nearly always the same; we like mayors who are approachable, who reflect concern about such issues as development and environmental control, and who answer their mail (there were a surprising number of nominees for “worst” mayor based on complaints that “he wouldn’t even answer my letter”; Art Phillips of Vancouver, otherwise considered an okay guy, came into this category). The qualities that turned our readers off" were arrogance, unconcern and a general feeling that some mayors simply don’t care about anyone but themselves and their friends. There was a solid block of votes against Leonard Jones because of what Maclean’s readers saw as his intransigence on the issue of language rights of French Canadians. In a municipality which is 34% French speaking, city hall in Moncton is still anglophone.

Below, we are running the two winning nominations, that for Rod Sykes as Canada’s “best” mayor, from John Wallace of Calgary, and that for Leonard Jones, as Canada’s “worst,” from Robert Thibault, of Moncton. Cheques for $25 have gone to each of the winners, with our congratulations.

In addition, however, we were so delighted with some of the other nominations we received that we are going to print excerpts from them here, and cheques have been sent to the authors of these letters, too.

One of our favorites is a letter in praise of David Crombie of Toronto, from Joe Paul:

“I think David Crombie of Toronto is the best mayor in Canada because any man whose height does not reach the lapel of a beaver is certainly not going to encourage the construction of buildings tall enough to give a 747 a nosebleed.” Crombie drew a lot of praise for his attempts to control development in Toronto, but he also strikes people as eminently approachableOne letter from an anonymous admirer, simply says: “He’s young, progressive, he’s pixie-ish looking, he’s giving all he’s got, what more can you ask of a man?”

Victor Copps of Hamilton won plaudits for his leadership on contentious issues, but raised the wrath of Douglas Ellis because “he sold most of the city’s snow-removal equipment to Buffalo approximately two years ago.”

A mayor who was praised on similar narrow grounds is Dr. Juan Teran, of Pincher Creek, Alberta. According to fellowcitizen Josephine Hlady, “He refused to let a large city-based firm take over the laundry facilities at the local hospital. He is, therefore, one of that rare breed of politician who prefers to do his dirty laundry at home.”

Some readers were moved to poetry, and Mayor Drapeau brought this streak out in Joan Maass:

“He ignores the poor,

He hates the press,

He deplores a strong opposition.

Reduced bus fares for the aged.

He loves expressways And highrise apartments,

While mourning the death of our city.”

Henry Baker of Regina was another who set the poetic juices flowing, and Bill Barry, of Watrous, Saskatchewan, “a disgruntled ex-Reginan,” wrote him six stinging stanzas that end:

“For Baker is a faker Who refuses to be heard.”

One happy result of the survey was that nearly twice as many people sent in nominations for “best” mayor (215) as for “worst” (123). Then we got our 339th letter, from a man who must do an awful lot of traveling, and who says that “no one is the’best’, every one is the‘worst’.”It’s enough to make a chap give up politics. &£? 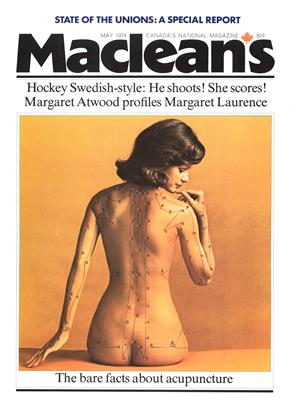