Bugging and the art of Conversation JOHN HOFSESS June 1 1974

The Conversation was written by Francis Ford Coppola eight years ago, shortly after Blow Up was released (a film to which it has a significant intellectual debt) but it wasn’t until the historic success of The Godfather that any studio would give him the money needed. The Conversation is a sure bet to be one

of the best films of 1974; it may even end up one of those classics that help define our place and time in the 70s. A few years ago, the general public might have considered the story fanciful; but not since Watergate. Harry Caul (masterfully portrayed by Gene Hackman) is a 44-year-old electronic surveillance expert, obsessed with perfecting better mikes and transmitters in order to snoop on his “targets” — which might well be you or me. He’s a bachelor, with a complicated Catholic sense of guilt (he can’t stand people using God or Jesus to cuss with, yet his professional bugging is clearly implicated in several murders); he needs people but he doesn’t know how to relate to them. He jealously — almost insanely — guards his own privacy: he has multiple locks on his apartment door, he tells his girlfriend he has no home telephone, when he has. Coppola unravels the story with a slow pace (this is no film for Magnum Force action fans) letting all of its chilling implications sink in. While the emphasis is on character study (one of the most detailed and absorbing yet to be seen in an American film) Coppola knows all the rules of mass entertainment: he knows when to turn the screws for suspense, he knows how to shock and horrify. The Conversation is about as intelligent as mass movies ever dare get (without failing at the box office). You can actually feel it stretching the limits of public tolerance for new themes and adult treatments of those themes. It’s timely, topical, and bound to provoke more talk than practically any movie scheduled for release this year. It proves, ten years early, in a compelling, chilling vision, how close we are to Orwell’s 1984.

You don’t have to be Jewish to like The Apprenticeship Of Duddy Kravitz but it certainly helps. It will help some filmgoers so much they won’t spot a single flaw in the picture. But outside its pre-sold minority, Duddy Kravitz is likely to be sloughed off as a boring and dated movie.

It’s a lean year for Canadian films. Even so, I see no reason to praise Duddy Kravitz beyond its meagre due. It is not a charismatic movie. There is nothing here to fire the imagination, stimulate the emotions, stir the mind, or shake up one’s life. A lot of people have worked hard on it but for all their labor it’s a tidy and earnest work of feeble imagination and unimportant truths.

Movies are made when money can be raised, and when certain teams of directors, writers and actors are available; this may be the first opportunity

that Mordecai Richler and director Ted Kotcheff had of putting Duddy Kravitz on film since the novel was published 15 years ago, but it is, nevertheless, the wrong moment. The material has dated greatly. Whatever one may think of the novel, it simply isn’t marketable as a movie in 1974. Duddy Kravitz is one of those supposedly instructive moral tales about a young man who gains the whole world and loses his soul. We are shown Duddy’s sometimes ingenious, often ruthless attempts to buy a piece of land while he alienates and eventually loses his two best friends. It’s the sort of story that will make some people say, “how true, how true,” and then go right back to living as they always do, as Duddy Kravitz does, being pushy, self-centred and materialistic. The movie encourages this feeling of hypocritical superficiality. It has moments of scatological humour, heavy-handed irreverence, and calculated poignancies, but it has no unifying power to make the story of Duddy Kravitz emotionally or morally effective. At its core, Duddy Kravitz is a hollow story about a hollow man, dressed up in Jewish jokes to conceal its deficiencies.

As Duddy, 25-vear-old American actor Richard Dreyfuss (who portrayed Curt, in American Graffiti) acts up a storm. He’s always itching and scratching, making faces, pulling his hair, slapping his thighs, grinning, leering, laughing: it’s as if he were trying to earn two Oscars with one performance. The film would drag long before it does without Dreyfuss’ energetic attention-getting antics, but even he proves wearisome once he’s run through his bag of tricks. Micheline Lanctôt, who gave one of the most memorable performances ever in a Canadian film in Gilles Carle’s The'True Nature Of Bernadette, does nothing but look nice here in the role

of Yvette, Duddy’s girl friend. She not only talks — but walks — in a stilted manner, as if she thought the part she was playing was that of a marionette. Randy Quaid, another young American actor (The Last Picture Show, and notably The Last Detail with Jack Nicholson) portrays Virgil, an epileptic friend of Duddy’s who becomes crippled for life in an auto accident. It’s a solid, small role and he does it well. Jack Warden, Joe Silver, Denholm Elliott, Zvee Scooler, and Henry Ramer also contribute fine performances. If acting alone could save Duddy Kravitz, it would be a good film, but acting cannot save a story as thin and threadbare as this.

Philip Roth’s Portnoy’s Complaint terminated the theme of “growing up Jewish” (thank goodness); in Duddy Kravitz the song has ended but the malady lingers on.

THE SUGARLAND EXPRESS A pennybright and sassy film by 26-yearold director Steven Spielberg, starring Goldie Hawn and William Atherton as the lovable pair of fugitives.

THE GREAT GATSBY A 1975 Oscar for costumes and set design. Redford and Farrow aren’t nearly as friendly as Redford and Newman.

who carved the gargoyles around the pillars of the original building, was fatally stabbed one night in a quarrel over a local maiden not long after the building was completed in 1856. His spirit stays on, seeking revenge. 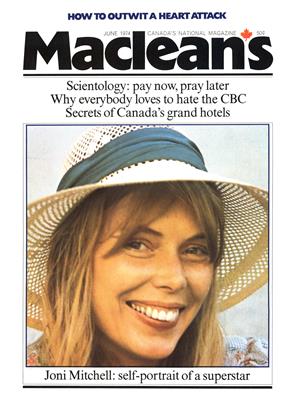