It’s getting harder and harder to say much about any part of Canada without inspiring some frothy - mouthed screwball to dump all over you for committing the ultimate Canadian sin: regional bigotry. I have personal experience to prove that, if a Torontonian moves to Nova Scotia and writes unpleasant words about Nova Scotian life, someone’s going to scream, “Regional bigot!”

Prickliness between east and west and interprovincial nastiness have distance, history and economic rivalries on their side and they’ve been around, it seems, forever. There’s even a certain grandeur in the contest. But then you find people are also quick to shout “regional bigot” from valley unto valley, or over a stream, or across the Canso Causeway; and you wonder what hope there is for The Canadian Experiment.

All of which brings me to cockfighting. Maybe you don’t like it. Maybe you think that people convicted of running cockfights in the backwoods of Canada should pay for their crime, just as other lawbreakers do. If you believe such guff, well, I’m afraid there are those who will know that you are, indeed, bigoted against Cape Breton Island. Even if you come from Halifax.

No? Well, a few months ago a bunch of Mounties raided a barn in Lingan, Cape Breton Island, and broke up a substantia] cockfighting fest. The Mounties decided to kill 32 fighting cocks but none of the constables was noticeably handy with an axe. In fact, they were making such a hash of the executions that, according to one story, “Finally, a couple of the boys (both rooster - managers) stepped in and said, ‘For the love of God!’ and did the job themselves.”

This singular act of cooperation with the RCMP did not quite get the boys off in court. Thirty-eight paid fines of $28 each, and the court fined Johnny Rockett, whose barn was the scene of the fight card, a stiff $200. I mean it was stiff by Johnny’s standards. He’s a family man and, as the local MLA pointed out in an angry letter to a newspaper, “Johnny Rockett gets by on the lousy War Veterans’ Allowance they pay, and what

little he can eke out of his dirt-poor acre or two of land.”

The MLA, Paul MacEwan (NDP Cape Breton Nova) is not a fan of what he prefers to call “rooster fighting.” Still, it’s his conviction that, by contrast to the sanctioned barbarities of society, it’s not all that horrible. “Let’s see something done to relieve the cruelty to people before we start worrying about roosters. . . Let’s start worrying about willful exploitation and cruelty by one human being to another before we start shedding crocodile tears over a few fighting roosters who are only following instinct.” Boxing is disgusting, too, MacEwan suggests, but it enjoys respectability because the people who patronize it are “the cream of society” and “pimps whose chauffeur-driven RollsRoyce limousines await them out-

side.” And speaking of boxing, MacEwan so infuriated an enemy member of the Nova Scotia legislature not too long ago that the other fellow, right on the floor of the House, threw a barrage of determined punches at his head. It would be wonderful, a Halifax radio personality suggested later, if the two politicians would now square off before a fight-canny crowd of hard-betting roosters.

Anyway, MacEwan argues that cockfighting’s misfortune is that, unlike boxing, it can rely for fans only on your humble “coal miners and fishermen and farmers and pensioners,” and he may just have a point.

A story by Linden MacIntyre, the Halifax Chronicle - Herald's knowledgeable man in Cape Breton Island, says that one rooster — a five-pound, seven-year-old, one-eyed tough whom MacIntyre calls Big Bird — has fathered “more than he can remember of the 300 or 400 contending roosters in this area” of Cape Breton. Big Bird eats some scratch feed in the morning, a bit of egg and raw hamburger and

maybe an apple at noon, and more chicken feed at night. MacIntyre asserts that Big Bird’s diet is better than his owner’s; and this certainly confirms the impression MacEwan gives that your typical Cape Breton Island cockfighting aficionado is a man of limited circumstances.

The judge who sentenced the 39 rooster-fighting fans had remarked that “the birds tear each other apart . . . their lungs were punctured.” And MacEwan, in his letter to The 4th Estate newspaper in Halifax, therefore asked, “If people want to get uptight about how the poor roosters fight with one another, why don’t they also want to get uptight about how the peace officers destroyed the roosters with more bloodshed and more mayhem than ever a rooster fight caused?” This suggests MacEwan can’t see the difference between intentional lawbreaking and clumsy law enforcement but, anyway, he went on to answer his own question.

Such atrocities as the Mounties’ inefficient chopping “are blanked out of the picture, because they would not promote the cause of coming down hard on the little fellow and his amusements, and above all coming down hard on Cape Breton.” Ah, now it’s coming isn’t it? The world is bigoted against Cape Breton Island, and the amusements she loves best.

Some Cape Breton little fellows will tell you that tjie Criminal Code imposes regional bigotry on them because it outlaws something that is more pleasurable to them than it is to any other people in the country. This is not quite like saying laws against murder are unfair to Detroit because a lot of murderers live there. No, it’s more like saying that laws against prostitution express regional bigotry against Montreal because more Montrealers hire prostitutes than do citizens of Lingan, Cape Breton Island.

“I suppose once you get up around Halifax way, it’s the thing to do to poke wisecrack remarks and heap ridicule at Cape Breton, just like they do the same thing to all Maritimers in Toronto, and almost everybody tells Newfie jokes, and there was a time when nigger jokes were a common amusement...”

Not only that, MacEwan’s accusation that “they” heap ridicule on all Maritimers in Toronto is a gross smear on Toronto. My father, a Nova Scotian, worked out of Toronto for close to 40 years. I did not hear him once complain about anyone heaping ridicule on him. For a quarter of a century, Maritimers would show up at our house for Saturday-night poker games. I do not recall any of them ever complaining about Toronto heaping ridicule on them. I’ve lived a lot in both places. My hunch is that Toronto is at least as friendly toward Nova Scotians as Nova Scotians are toward Torontonians.

My other hunch is that the real regional bigots in this country are the people who scream “Regional bigot” the second an “outsider” offers an opinion about their corner of the country. They do it as automatically as killer roosters lunge at killer roosters; and, if saying so makes me a regional bigot in your eyes, I guess I’ll live with it. I’ve heard it before. 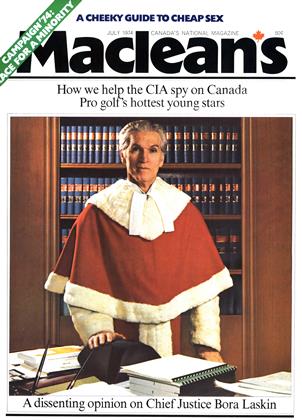