WASHINGTON — The Watergate mess, when all is said and done, will turn out to have been a good thing for the U.S., and for Canada. Not because of the scandal — the opening of cans of worms is often instructive but seldom uplifting — rather because of the effect it is having on the presidency. When Richard Nixon comes over a television set anywhere in Canada to affirm that what he is defending is not himself, Heaven forfend, but the presidency, he is greeted with sniggers; here in Washington, the reaction is rather different, and mixed. Certainly Nixon’s impeachment — pending, but not a reality as I write this — is personal, but it is also political in the deepest sense of that word; it is an attack on the presidential office. That attack is long overdue, and its success — for it has already attained a measure of success — will have far-reaching consequences for both Americans and Canadians.

The U.S. constitution, as every schoolboy knows, provided for a division of the powers of government into three distinct areas, legislative, executive and judicial, and gave each to a separate branch, respectively the Congress, the President and the Supreme Court, for its special care. The President, because he possessed the executive power, was the first among equals in this triumvirate, but they were nonetheless equals, and it was possible for Philip Guedalla to write, in 1936, that in American history “the names of railroad presidents are more significant than those of Presidents of the United States,” without immediately being hooted into silence.

No more. The President has become virtually the fount of political power in Washington. Historian Arthur M. Schlesinger Jr. put the point very succinctly in a book written recently but before the dimensions of the Watergate scandal became apparent (The Imperial Presidency).

“In our time (presidential leadership) has produced a concept of presidential power so spacious and peremptory as to imply a radical transformation of the traditional polity. In the last years, presidential primacy, so indispensable to the political order, has turned into presidential supremacy. The Constitutional Presidency has become the Imperial Presidency, and threatens to become the Revolutionary Presidency.”

Schlesinger had solid grounds for his conclusions; President Nixon, who had inherited puffed-up powers from his predecessors, had inflated them yet again. Under Nixon, an American President could not only run a war without the consent of Congress, he could defy the other branches of government. He could and did remake the Supreme Court, whose uncomfortable decisions on education and civil rights upset him, and he could and did overrule Congress, not by the traditional veto but by impounding the funds for spending programs that Congress had passed over his veto (as he did to block spending on the Great Lakes cleanup program, despite an agreement with Canada).

Then came Watergate, a string of revelations that is still unwinding and that showed what Nixon had done with his unbridled power. When Harry Truman was President, he bought his own roll of three-cent stamps for personal mail; Nixon spent millions in public funds for his private advantage, and then dodged his fair share of the income tax. He used the FBI, the CIA and the Internal Revenue Service as personal weapons to

harass his opponents; he developed legislation for campaign contributors (such as the milk cooperatives, who got higher prices for their products coincidentally with the gift of sizable contributions). His aides, who had become more powerful than most cabinet ministers, intervened repeatedly with the process of law on behalf of Presidential friends.

In these actions, it was the abuse of power that rankled Americans, not the shading of law; he may be forgiven his role in the original Watergate burglary incident (it is a shock to a Canadian to find out how many ordinary Americans, once you move outside politically sensitive Washington, think he was nothing but a victim of the excesses of his friends); he will never be forgiven for imagining that the President was above the law or, worse still, above the Income Tax. Americans have reacted to the Imperial President with bitter resentment, and in the wake of that resentment has come considerable reform.

Late in March, the Senate, by an 80-to-0 vote, passed a budget-reform bill that Senator Charles Percy, one of its coauthors, called an “historic turning point.” The bill — like a similar measure that passed the House of Representatives last December — will make the Congress an active partner in budget planning for the first time. Up until now, only the President’s Office of Management and Budget had any central control over the budget; Congress merely passed 13 separate appropriation bills, and fiddled with the contents of those bills without even knowing, until all were passed and added up, what the total would come to. Under the new bill, a Congressional Office of the Budget will play a key role in drafting proposals and applying a coherent approach to spending. What is more, the President’s present ability to balk Congress through the device of impounding funds will be curtailed.

The new budget law will almost certainly pass — Nixon daren't block it, even if he is still in power when the final draft emerges from a joint committee — and it will represent an abrupt reversal of the trend to centralize more power in the White House. There are other signs of this reversal, too — the President’s difficulties in getting key appointees approved by Congress, the new feistiness of Congressional subcommittees, the reactions, ranging from pity to contempt, that greet Presidential dicta which once sent this power-conscious city into a prolonged tizzy.

lesson) for Canada. Part of our political mythology holds that a strong

President is in Canada’s interest, because the U.S. Congress tends to be protectionist, and the executive liberal, in trade matters, to the benefit of our economy. In fact, however, it has been the unilateral actions of strong Presidents that have posed the greatest threats and done the greatest damage to Canadians in recent years. It was John Kennedy’s Interest Equalization Tax that buckled our knees in the early 1960s; it was Lyridon Johnson’s drive to bring home U.S. dollars that nearly did us in again, and it was the abruptly imposed new Nixonomics of 1971 that brought senior cabinet ministers tearing down to Washington to beg for mercy. An overpowerful President is not Canada’s friend, he is our potential enemy, and the restoration of some sort of balance into the U.S. system is important for both our nations. So, while I am sorry that the Watergate piess has been attended by so much all around nastiness, I am not at all sorry that it happened. 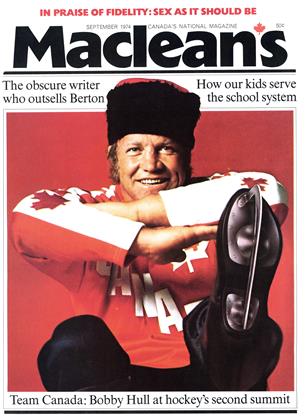