Down and up in San Francisco WALTER STEWART January 1 1975

I’m lying in bed. scribbling in a notebook propped up against my knees, while through the open hotel window drift the early morning sounds of San Francisco — a tolling bell, the rude blaat of a foghorn, the insistent ding-dong of a cable car lurching its improbable way up the steep slope of California Street. The sun has barely risen from its Pacific bed. and already it’s hard at work burning off the morning fog; within a couple of hours, it will have warmed the city to a comforting 55 or 60 degrees, and I will step out in a suitcoat. with a smile on my lips and scorn in my heart for the poor saps back in Toronto, Montreal and Winnipeg, bundled and bitter, on their wintry way to work.

I am content. The Mark Hopkins Hotel is, as advertised, as comfortable as an old shoe (an expensive old shoe); 1 am replete, still, with a dinner downed last night at the Empress of China restaurant. a meal that ranks with the finest ever to cross my gums (it compares with one eaten a year ago at Chez Victor’s in Vancouver, a meal I then thought could never be equaled); my brain teems with happy memories of a day spent dashing across the city, sampling its delights, and with anticipation of more to come. Now that it has worked out this way, I

can confess that 1 was nervous. I mean. San Francisco is so damn touristy. 1 was afraid we were headed for disaster. It is also expensive — when a hotel can slam you $52 a day for a double room, and then nick you another $5.50 for parking without even a blush, that's expensive. What if I had lured my wife here with oil-smooth talk of San Francisco’s quaint charm, noble vistas, elegant shops, and we wound up with nothing but an expensive disaster?

On the way here, we kept hearing stories that the city was infested with fleas, that behind its smooth public face were private cankers — racial violence, labor unrest, and let’s not forget Patricia Hearst. There seemed a fair chance that we would be bitten, picketed, mugged and machine-gunned in turn on arrival. Forget it. San Francisco has its problems, no doubt about that, but tourists are exempt, just as visitors to Toronto, Montreal. Halifax or Vancouver are seldom conscious of the warts on the body politic in those cities. This may be a lousy place to live if you are black or poor or old. but for the tourist it is everything its extravagant travel folders proclaim.

There really are cable cars, ancient Tinkertoys which look like Toonerville

trolleys from the old comic strip. They are hauled up and down the startled slopes by 10.5 miles of 1'/4-inch cable which runs in a trench beneath the streets and rumbles endlessly, giving the city core a steady, clunking hum, like a monster breathing. You scramble on almost anywhere, drop a quarter in the outstretched hand of a conductor and ride up and dow n the hills, torn between watching the scenery and watching the gripman. He operates the levers that close a claw' on the ever-turning cable and propel the car at a steady 9.5 miles an hour, uphill and down. It is the considered view' of many of the city’s citizens that all the gripmen and conductors are daffy. The idea that anyone would spend his days riding up and down slopes so nearly perpendicular seems daffy; when the first car was set to rumble down Jones Street on August 2. 1873. the operator selected for the honor of guiding her down took one look at the hill and walked away. He seems to have exercised sound judgment, and it is easy to believe that the men who perform the task he turned down must be strange. Certainly the operators have character;

Walter Stewart is an associate editor of Maclean’s.

they talk almost continuously and they stop and start the vehicles on what seems to be the whim of the moment. One operator, Turkey Neck Melville, is proudly remembered because “he wouldn’t stop for anybodyanother. Happy Menzies. had an argument with a customer, got off the car and was seen no more; a third. Michell Bell, achieved fame by throwing Lynda Bird Johnson, daughter of then President Lyndon Johnson, off his car for dripping ice cream on the seats.

In turn, the operators are convinced that most of their customers have a screw loose; one tells of a lady who boarded his car naked one night, and wouldn’t get off until he kissed her; another remembers a man who carried an empty leash, which he claimed restrained an airedale named Spot; a third recalls giving a tourist lady instructions for a good restaurant — she didn’t like the place, so she came back and slugged him with her purse.

Anyway, the cable cars have both character and charm, and you will never get a better buy for a quarter than a ride on one.

There really are breathtaking views — for example, from Telegraph Hill, where you can look north past the prison island of Alcatraz, west along the lovely sweep of the Golden Gate bridge (which is neither golden nor gate-like), south and east past Oakland to the clustered cities of the Bay area, or straight down to the looming skyscrapers, the towering churches and the verdant parks of San Francisco.

There really are elegant shopping areas — Ghirardelli Square, a converted chocolate factory near fragrant Fisherman’s Wharf, or Union Square, at the city centre, or the Japan Centre, or Chinatown. San Francisco is, first and foremost, a world port and, along with the usual tourist rip-offs, proffers some astonishing bargains.

Finally, there really is a sense of history here. Perhaps it has something to do with the 1906 earthquake and fire, which flattened 28.000 buildings and took 500 lives. Apparently there is nothing like a little holocaust to deepen a city’s appreciation of its history, and San Francisco wears a knowledge of its colorful, often violent, past like a proud badge. The place was established by the Spaniards in 1776, wrenched away by the Americans in 1846, and grew under the explosive thrust of the gold rush that began in 1849. It was a wide-open, opulent, restless, brawling city, and when the great ’quake came in 1906 there

were many who thought God was administering a deserved rebuke. The theme of divine retribution, always popular with the clergy, received heavy play in the churches until a local poet noted that Hotaling’s whiskey factory had survived. and this prompted him to wonder aloud in doggerel:

“If, as they say, God spanked the

Why did He burn His churches

Whatever its theological implications, the events of the earthquake seem to have left the city with a sense of the importance of preserving itself; the place abounds in museums, statues, monuments. The cable cars, in fact, although they transport 13 million passengers a year, are traveling museums. They were named a national historic landmark by the U.S. government 11 years ago. The downtown development battle — fought on the same controlled-growth vs. urban sprawl issue as elsewhere — has been marked by many citizen victories, including one that saw a monster expressway aimed at the heart of a residential district stopped cold in its tracks.

Because of its climate, with temperatures that seldom climb over 75 degrees or plunge below 45 degrees, because of its setting, because of its cosmopolitan flavor, with sizable Chinese, Japanese and Italian communities, San Francisco is a natural tourist magnet and draws close to two million visitors a year, nearly three times the native population. The advantage, for visitors, is that this is a city geared to their pleasures, whether normal (splendid views, famous restaurants) or bizarre (there is a salon in the Fairmont Hotel where you can have your body hair sculpted to any shape your heart desires). The disadvantage is that, much of the year, the place swarms with fellow tourists. We travelers are a queer lot, we want to visit all the world's famous cities, and we want everybody else to stay home so that we can enjoy them in peace. But San Francisco can meet even this perverse yearning; the place abounds in parks, so many and so large that you can wander unmolested for hours.

Anyone who tires of the hurly-burly of downtown can find surcease in Golden Gate Park, a five-minute cabride away. The park was bought by the city in 1868 for $1.3 million, when it was nothing but a 1,000-acre patch of windswept sand dunes overlooking the Pacific. Over the years, trees and grass were

planted, tended and nurtured — it takes five million gallons of water a day to irrigate the three-mile-long park — until the area was transformed into a superb recreational centre, with its own conservatory, Japanese tea garden, museum, botanical gardens, planetarium, playgrounds and quiet, tree-shaded walks. Almost everything is free, and there is enough to see and do within the park borders alone to make any trip here worthwhile.

Indeed, San Francisco’s major problem for the tourist is that there is so damn much to see and do that you are bound to miss something; when you start to tell friends about your trip, you will be met by one of the standing putdowns: “You mean you didn’t visit the Aquatic Gardens?” or “How could you visit San Francisco and not see Seal Rock?” or “I'm sure you took in St. Mary’s Cathedral, darling; otherwise, why go?” The solution is to write to the San Francisco Convention and Visitors Bureau, 1390 Market Street, San Francisco, California 94102. They will send you a bundle of brochures that cover all the city highlights and help you plan your trip. 0 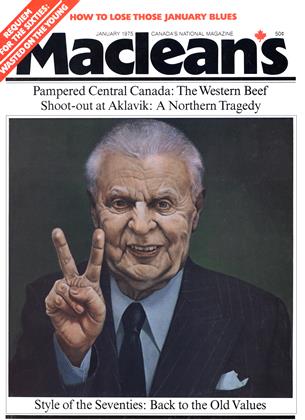