The CBC made an ass of itself in October, 1970, when the government declared the War Measures Act. Like almost everybody else, the network panicked. Documentaries on Lenin and the Hollywood Ten were summarily postponed because CBC brass apparently felt they would set off sparks in a combustible political climate. In addition, George Davidson, then CBC president, issued an order that all stories on the crisis were to be attributed to an identifiable source, thus ensuring onesided reporting. Now, five years later, the network has finally calmed down enough to do the job it should have done then: it will look at the events in Quebec in a 2Vihour documentary-drama called The October Crisis, to be aired October 26.

The CBC spent eight months and $250,000 on the project. “Our objective was to provide a great deal more information about that period,” says Peter Herrndorf, head of CBC’S current affairs department. He and producer Mark Blandford brought together a unit of 20 people and installed them in four rooms at Montreal’s Windsor Hotel. It was all supposed to be very hush-hush but their presence was one of the worst kept secrets in Montreal media circles. Journalists such as Ron Haggart, Richard Gwynn, Louis Martin, free-lances Nick Auf der Maur and Joe McAnthony worked with CBC reporters David Halton. Brian Stewart and Don Murray under Blandford’s supervision. They spent the first three months just gathering research.

Was it worth it? Advance indications are that The October Crisis reveals only driblets of new information. After the FLQ snatched Pierre Laporte from his front lawn, a prominent Montreal Mafia family approached Laporte’s aides, offering to help find him. The program also confirms reports that police knew Paul Rose was involved with the Laporte kidnappers and at one time even had him under surveillance. The most controversial segments will be the 16 dramatic sequences written by Tony Sheer and directed by Alvin Rakoff. “We use the drama segments to underline and punctuate the documentary,” says Herrndorf. which is another way of saying some people wouldn’t talk for the camera. A segment involving a Quebec cabinet minister’s bitter memory of what it was like to be with the Bourassa cabinet when they holed up in Montreal’s Queen Elizabeth Hotel had to be dramatized because the minister wouldn’t appear on camera. Some of the principal players who are still in power wouldn’t talk at all. Montreal Mayor Jean Drapeau said no. Mitchell Sharp and John Turner made themselves unavailable. The federal Solicitor-General refused to allow imprisoned FLQ members to be interviewed. They in turn asked their lawyer, Robert Lemieux (now a longshoreman in Sept lies), not to talk. The CBC had to pay James Cross $600 for his exclusive reminiscences.

It adds up to an enormous effort for slim results and the public does not appear anxious for anyone to shed more light on the crisis anyway. Two books on the subject — Rumors Of War by Ron Haggart and Aubrey Golden, and The Revolution Script by Brian Moore—have sold poorly. Action, the National Film Board documentary, stirred little comment when it was shown on CBC earlier this year. Two feature films, Les Ordres, which won a prize at the Cannes Film Festival, and Bingo, fared dismally at box offices outside Quebec. It seems doubtful that The October Crisis will shake the nation’s overwhelming indifference one little bit. RON BASE

William Shatner stopped trying to be a second Olivier in the early Sixties and left Stratford in search of Hollywood gold. He thought he’d struck pay dirt when he landed the leading role on Star Trek, the science fiction series that ran on NBC between 1966 and 1969. He was wrong. Although he saved the universe from destruction every week for three years as Captain James T. Kirk of the uss Enterprise, he couldn’t save himself from the Byzantine complexities of Paramount Television’s bookkeeping system. The series is still being recycled on 259 stations around the world, making it the most popular syndicated show in existence, but Paramount, which owns the majority interest, insists it is still $ 1.5 million in the red. Shatner owns part of the show with producer Gene Roddenberry, but he hasn’t received a cent of Star Trek’s syndication profits. “I’m not bitter about it,” he says, “although I do resent the fact that people who had nothing to do with the success of the show are making so much money.”

Shatner is going for gold again after seven years in the wasteland of television guest spots, summer stock, chain store commercials and B movies. This time he plays an undercover agent named Jeff Cable in a Western farce for ABC called The Barbary Coast. He’s fighting crime in 1870s’ California with Doug McClure instead of Klingons in interstellar space with Leonard Nimoy. The show is fast, loud and absolutely silly. It has Shatner donning three or four disguises each week to fool the bad guys, and as a result he must spend up to six hours a day in a makeup chair. Unfortunately, it may all be for nothing once again: the show seems marked for cancellation. The series was picked up only because ABC wanted to have the only prime time Western on the air, but it’s playing against stiff competition: Mary Tyler Moore and Phyllis on CBS. A number of ABC affiliates are running it in odd time periods or not at all. Ironically, they are opting for a science fiction series instead; rrv’s Space: 1999.

Shatner somehow remains optimistic; acting is a business like any other as far as he’s concerned. Every morning he gets up at five-thirty, jogs, exercises and goes to the studio. What does he think about during those long hours in the makeup chair? “Sometimes,” he sighs, “I sit here and try to figure out what happened to all that Star Trek money.” RON BASE 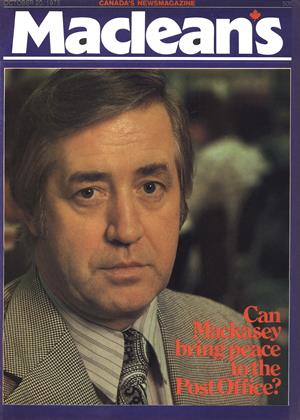