Six months ago, Peter Reilly’s life was a mess. He had lost his seat in parliament, his job hosting a radio hot-line show and he had been convicted of impaired driving. He was known for his inability to control his personal life (at 42 he has been married four times), and his drinking habits. Some of Reilly’s friends and most of his enemies thought he was finished. But September 30 he was back on camera with Adrienne Clarkson and Warner Troyer as the roving reporter on CBC’S much publicized new newsmagazine show, the fifth estate. It’s an amazing resurrection. “I have great survival instincts,” says Reilly. “I’ve had problems with drinking on and off for years, but I think now I’ve got it under control.”

It remains to be seen whether the fifth estate's survival instincts are as good. No public affairs program since This Hour Has Seven Days has been so lavishly ballyhooed. The budget for 26 shows is more than one million dollars. Rumors about the show have been flying around for months. Adrienne Clarkson supposedly insisted that her two co-hosts be male. She was also said to have demanded that Glenn Sarty, her trusted producer from Take Thirty and Adrienne At Large, be hired as executive producer and that her friend and Adrienne At Large colleague, Michael Smedley, be hired as producer. The hosts, Clarkson and Troyer, are rumored to be earning $60,000 a year, about $20,000 more than Carole Taylor gets for similar duties at CTV’S W5. And finally, CBC brass are supposedly spreading the word that they will give up on magazine style shows if this one bombs. Such rumors indicate that there is extraordinary pressure on the producers to come up with a winner.

The man under the gun is Peter Herrndorf, 34, head of the public affairs department, who convinced the CBC to give the Seven Days-style show one more shot. He finagled a large budget for the department and then forged the fifth estate's format with an eye on CBS’s highly successful 60 Minutes. He recruited journalists Ron Haggart and Gerald McAuliffe, both winners of national newspaper awards for their investigative reporting. The result is a program capable of hard, if occasionally sensational, investigative journalism. In the best piece so far Adrienne Clarkson looked into the crash last year of a Panarctic jet that killed 32 people and found a wildly mismanaged investigation and inquest. The show’s major flaw is its slavish imitation of 60 Minutes, borrowing even their graphics’ style to introduce items.

The show is already running into budget problems and there is talk of doing more filming in the studio and less on expensive locations. “We may have to turn it into a bloody talk show to limp into the end of the year,” sighs producer Sarty. If that happens, the fifth estate will have to rely even more heavily on its anchor-people. While Clarkson and Troyer can probably take the pressure, the question is can Peter Reilly?

Reilly first attracted attention in 1964 with his vivid coverage of an uprising in the Congo while working as a correspondent for CBC. In 1966 he became executive producer of CTV’S W5 but he fought with John Bassett, owner of the network’s Toronto flagship station, CFTO TV, and was back at CBC in less thanayear. By 1969 he’d been on and off every major public affairs’ show in the country (Sunday, Weekend) and was drinking heavily. Reilly was drying out in a clinic when Roy Faibish, then of CJOH TV in Ottawa, hired him as a parliamentary reporter. In 1972, Reilly left CJOH to run as a Conservative in the riding of Ottawa West. His parliamentary career was marked by sporadic, often desperately silly outbursts—he once booed John Diefenbaker in the House of Commons after a disagreement on bilingualism. In 1974, he lost his bid for reelection and took a job as a radio talk show host. Again he was fired. “He really has had personal problems,” concedes Herrndorf, “but my experience working with him has been a good one. We wanted one of the people on camera to be somewhat more sardonic but recognized as a kind of maverick.”

Somehow Reilly has always remained optimistic. When it is suggested to him that the fifth estate constitutes a comeback, he looks genuinely surprised. “Is that what people think? I guess I just figured I’d never been away.” RON BASE 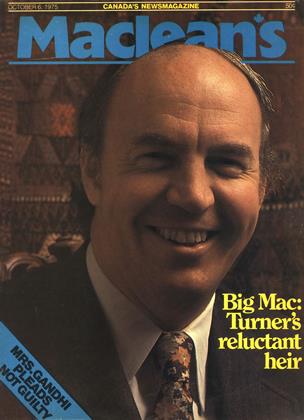