The patient, a 46-year-old alcoholic, was dying of cancer and knew it. Yet there he was leaning against an improvised bar in his hospital room waving at visitors and fellow-patients in the hallway to join him for a drink. His dog, curled up on the bed, had the satisfied look of a pet who knows he’s home.

Home in this case was a special ward in Montreal’s Royal Victoria Hospital dedicated to a unique commitment: removing the fear and agony from the knowledge of imminent death. Indeed, choosing to die with one’s dog and one’s own booze is not unusual at the Royal Vic. Staff on the hospital’s special dying unit believe that dying patients must live until the final moment of death—and do everything possible to prove it. Hospital regulations are ignored: patients can keep their own food and liquor and are served with a morphine-cocaine-alcohol cocktail to ease pain. Visitors, including pets and children, are welcome—anytime. So are patients’ requests, however personal. One man had sausage and beer for breakfast until the end; another had home-cooked meals delivered to his bed. Two teen-age girls played their guitars for their mother as she died; a 22-year-old son kept his final vigil by ordering a bed beside his mother and slept in the room holding her hand.

A daring experiment by conservative treatment standards, the Royal Vic’s death unit, euphemistically named the palliative care centre, has proven to be remarkably successful. Terminal patients and their families cherish the freedom, candor and understanding that characterize the ambience of the fourth-floor unit. The ward was created a year ago by Dr. Balfour Mount, himself a recovered cancer patient. Mount became aware that hospitals, geared as they are to the living, are dismal places in which to die—yet, as he realized, 80% of the urban population will die in them. He also suspected that hospital staff actually view death as a kind of failure and have little idea how to deal with terminal patients. To confirm this he drew up a questionnaire on attitudes to death and interviewed dozens at the Royal Vic, including patients, their friends and relatives and the staff—everyone from janitors and clerks to specialists.

Mount found that 65% of the dying want to be told the “absolute truth,” but most aren’t. Doctors, he found, are as afraid of death as anyone else: “We just aren’t comfortable in areas where we feel impotent,” he explains. Their usual procedure is to tell the relatives who in turn decide not to tell the patient, supposedly because the shock would hasten death. In fact, the patient usually figures it out for himself—the hard way. He sees his condition deteriorate, doctors don’t come as often. Nurses tell him “Oh, you’re just having a bad day” or “We all have to go someday.”

Mount saw flower-bearing families of the dying frozen with impotence, clumsy and sometimes even impatient for it to be over. In search of ideas to reverse this, he wound up at St. Christopher’s Hospice in London, England. There he found a facility operated solely for the dying, offering both inpatient and outpatient care. The Hospice’s greatest success had come from helping the terminally ill stay with their families until hospital care was absolutely necessary, thereby reducing the average hospital stay to 15 days (compared to 33 days at the Royal Vic). Mount took this economic saving and the incalculable humanistic gain back to the Royal Vic with the suggestion that he be allowed to attempt a pilot project.

Currently, the Montreal unit has only 12 beds and the usual drab institutional decor, but Mount’s project has been regarded so highly that plans have been made to create a new section for 40 beds in a homelike environment when the hospital’s expansion is completed in 1978. As at St. Christopher’s, Mount’s patients are encouraged to return home in times of remission. When they are hospitalized patients are looked after by 30 staff members plus 50 volunteers who have all taken special courses set up by Mount at McGill University. Staff members, trained to monitor home care, counsel family members in coping with domestic routines. Most important, says Mount, his staff and the volunteers have learned how to talk without discomfort to someone who is dying and to provide the simple comforts that can soften a patient’s sense of loneliness and anguish.

Mount’s pioneering efforts have been paralleled at Winnipeg’s St. Boniface hospital. Under the direction of Dr. David Skelton, the hospital’s 37-year-old geriatric director, Winnipeg’s terminal ward is in a new wing where staff and volunteers are trained to teach the dying “how to live for whatever time is left.” “Once patients learn this,” explains Skelton, “they inevitably die better deaths. Our staff knows that they have to get close to patients to empathize and they have to know how to deal with their own feelings, because in the end they are often hurt.”

The new approach to death practised by Mount and Skelton may all but eliminate the awkward and pathetic scenes often reported in hospitals, especially emergency wards. As word of their success has spread, doctors have flown in to view the units and discuss their philosophy. But Mount is convinced that the need to adopt new attitudes toward death requires a higher priority: the 36-year-old urologist now feels government should support his vision of separate hospices devoted exclusively to helping patients and their families cope more easily during the hours of their greatest need. 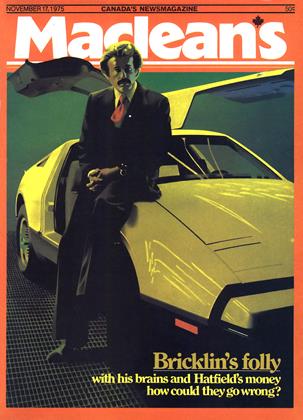