For the 14,000 residents of Fort McMurray, Alberta, the future development of the Athabasca tar sands, 25 miles north of town, represents a welcome economic windfall: more jobs, thriving commerce, cash in the pocket. But in recent weeks, an ominous undercurrent has been running through the town, impelled by rumors of a decidedly more sinister windfall. The villain: vanadium, a chemical found in large quantities in the tar sands. Harmless by itself, vanadium is lethal when combined with vapor and sulphur dioxide (an inevitable by-product of Syncrude Canada’s two-billion-dollar extraction plant, now under construction). The combination forms a toxic sulphuric acid fog that could kill vegetation, wildlife and humans. “Dear God, it’s frightening to think what might happen to this town.” says Anne Cullen, a mother of two. “My husband and I moved away from all that traffic and pollution stuff in the city. Now ... I don’t know.”

Civic fears have been underscored by a raging controversy over whether Peter Lougheed’s Conservative government covered up possible tar sands health hazards in a task force report, tabled last year. According to STOP (Save Tomorrow. Stop Pollution), an independent environmental organization, the government concealed findings by five scientists that sulphur emissions and effluent from the Syncrude plant could cause serious health problems. The confidential findings—the work of scientists representing the federal and provincial governments and the University of Alberta—were slated to appear as appendices in the task force report. They were never published. Environment Minister Dave Russell denies any deliberate attempt at concealment, but cannot explain why the appendices were not included. According to Russell, the essence of their findings was incorporated elsewhere in the report, STOP, however, contends that the scientists’ wording is considerably stronger than the government document. One of the scientists, Alberta meteorologist Edward Stashko, says in his report that the climate and topography of the tar sands mining sites “leaves the area precariously vulnerable to the severest of environmental degradation by toxic emission stagnation.” Albertans, Stashko concludes, “could face an environmental legacy that pales Sudbury and Los Angeles.”

STOP researcher and chemical engineer Ron Aubin claims that when Syncrude begins operations in 1978, it will extract enough tar sand daily to contain 20,000 pounds of vanadium and will emit enough sulphur dioxide (645,750 pounds a day) to create an acid cloud similar to the one that killed 2,500 people in London, England, in 1952. Already STOP has warned that it will seek a court injunction to shut down Syncrude, unless tougher pollution standards are invoked. But Dr. Ron Goforth, the company’s director of research and environmental affairs, says, “STOP’S charges are inaccurate and distorted. Their comparison with the London fog is farfetched. Fort McMurray and London have almost nothing in common in climatic conditions, humidity, prevalence of fogs or types of fuel burned.”

The confusing welter of claims and counterclaims has now sparked calls for a full-scale inquiry. Grant Notley, the scrappy leader of Alberta’s New Democratic Party, has promised to push for an independent environmental authority to police the tar sands. Although Ottawa and Alberta (part owners, with Ontario, of the project) have pledged $40 million toward environmental studies over the next 10 years, Notley believes the two governments have “too many vested interests” to do a proper job. Despite the recent studies, many observers feel that accurate data will only be available once the plant is operational, but Anne and Bill Cullen aren’t planning to wait. Cullen recently began looking for another job—in Edmonton, 305 miles south, where, he says, his family will feel considerably safer. DARTOST

Something in the water

Since 1908, the standard method of purifying drinking water has been to dose it with massive amounts of chlorine. Used in almost every city in Europe and North America, chlorination is perhaps the most important single contribution to public health made in this century. Now, research conducted in Holland and since duplicated in both the United States and Canada shows that chlorine reacts with some substances—including human excrement—to produce a family of chemical compounds called “organohalides,” which have been shown to cause cancer (primarily of the liver) in laboratory animals. The lethal dose for most of the compounds, known collectively as chlorinated hydrocarbons, is high—far higher than the traces so far detected in drinking water. But, says Alan B. Hais of the U.S. Environmental Protection Agency: “We simply don’t know what the effects of long-term exposure to the organics are. We’re trying to find out.” The problem may be acute. A U.S. survey of 80 cities and towns showed organics in the drinking water of 79; a similar survey of 12 Ontario municipalities found organics in the drinking water of 11. (The exception was Guelph, which does not draw its water supply from the Great Lakes-St. Lawrence system; Belleville recorded one of the highest levels of contamination in North America.) Ontario Ministry of Environment researchers say that present filtration methods are incapable of significantly reducing the level of organics in the water supply. “We don’t see any way out of this bag,” says Paul Foley, OME research coordinator. “The question is ‘Can we get them out?’ So far, we can’t.” To public health officials the dilemma is clear. Chlorination is essential to prevent widespread outbreaks of disease; but continuing it may progressively increase the risk of cancer. Ironically, this Hobson’s choice is even tougher because of attempts to clean up other forms of water pollution. In the United States and Canada most communities now treat their waste water the same way they treat drinking water — by adding more chlorine to the sewage. The result: an even higher level of organics. What can be done about it? One obvious answer is to find methods of purifying both drinking water and sewage that use less chlorine. Among the alternatives currently being examined:

Ozonation. Already in use in some Canadian cities (notably Quebec City) and in parts of Europe—Montreal’s planned ozonation plant will be the largest in the world when it is finished—the technique involves bubbling ozone, an unstable form of oxygen, through the water. By the time it arrives in the tap, the ozone has long since turned to oxygen which kills the bacteria. But some researchers have reservations about possible by-products.

Ultraviolet radiation. This kills bacteria, but costs much more than other methods. One Ontario firm is working on a variation using gamma radiation to kill bacteria in the sludge produced by water purification systems, then reselling it as fertilizer. One potential problem: the sludge often contains high levels of heavy metals, and spreading irradiated lead on the ground may not be the best way to get rid of unwanted chlorine.

Bacteriological warfare. Some scientists are hopeful that sewage can be used as a culture medium in which harmless bacteria can be bred to attack disease-causing organisms. Again, however, there is concern about by-products. Says Dr. Peter Toft of the Ministry of National Health and Welfare: “I’d want to check very carefully the results of that process. What we get out of it might be worse than what we had before.”

Light-sensitive dyes. One of the most promising new techniques has been developed by two virology professors at Houston’s Baylor Medical College. A trace of nontoxic, light-sensitive blue dye is injected into the nucleic acid of both bacteria and viruses. As the treated water is exposed to light (even ordinary sunlight), the microorganisms absorb energy from the light and kill the bacteria. The process also kills viruses—such as those that cause polio, hepatitis and meningitis—previously resistant to treatment with chlorine. Drs. Craig Wallis and Joseph Melnick, who originally developed the technique as a treatment for virus infections, have applied for a patent as a method of purifying water.

Whatever alternatives are finally adopted, the present level of concern suggests that the days of chlorine—which has probably saved more lives than all the wonder drugs combined—may be numbered. BILL DAMPIER 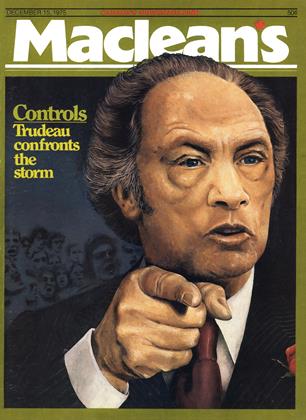