Fast Eddie Goodman shook his wise old head sadly. “The federal government,” he said, “had no other choice than to do what it did to the provinces. No other choice.” I nearly fell off my chair. Fast Eddie, as everybody knows, is a Tory bagman and one-man think-tank; at a guess, the last time he had anything kind to say about a Liberal administration, Laurier was still alive. What’s more, the federal leader of his party, Robert Stanfield, has a list of options the government might have pursued, and so does Peter Lougheed, the Alberta premier and a putative successor to Stanfield.

What the federal government had done was to precipitate yet another constitutional crisis by refusing to allow resource companies the right to deduct provincial royalties from federal income tax. That action, proposed in last May’s budget, then reintroduced after the general election, created a split in every political party, set most of the provinces baying after Ottawa’s hide, and opened a debate that will absorb much of our political energy over the next year.

There are two issues at stake here, and they should be kept quite separate, because it seems to me that on one issue the federal Liberals — and Fast Eddie — are absolutely right, and on the other they are wrong, wrong, wrong.

The first is the issue of revenue sharing; what are we going to do with the windfall profits created by world increases in the price of non-renewable resources?

The British North America Act, for once, is perfectly clear; it says, in Section 109, “All Lands, Mines, Minerals and Royalties belonging to the several Provinces . . . and all Sums then due or payable for such Lands, Mines, Minerals or Royalties, shall belong to the several Provinces.” The deal under which Confederation was joined left the provinces their resources and the income from them, and the four western provinces were placed in the same position by a 1930 amendment to the Act.

However, when the BNA Act was written, resource revenue was not important; today it is vital. During the December round of federal-provincial resource squabbling in Ottawa, Finance Minister John Turner calculated that the provinces will receive $22 billion in royalties and other levies from oil and gas over the next five years: that is a hell of a lot of money. It is enough money, in fact, to twist Canadian Confederation out of joint.

If there is any logic to Confederation, it is to bring about some fair sharing of the nation’s wealth; the only government in a position to administer that fair-sharing is the federal government, and it has not done enough in this line. Ontario has always been the spoiled daughter of Confederation, and it is a matter of bitter irony to some provinces — Saskatchewan, for example — that Ottawa’s passion for equality only became acute when it looked as if the West might get a leg up on the rest of the nation.

But let that pass; the point is that the new resource wealth had to be dealt with, had to be portioned out in a fairer way than our industrial wealth has been, and the gov-

ernment was absolutely right to move to meet that problem.

Where it was wrong, however, was in the way it chose to do so; in a single, arrogant paragraph in the budget speech. It was done by executive fiat. The federal cabinet has chosen to confiscate, without any consultation or compensation, not only a huge share of royalties belonging to the provinces but the provinces’ right to develop their resources according to their own needs and priorities. Without the right to deduct provincial royalties from their income from taxation, resource companies might have found themselves taxed at a rate of more than 100%; the provinces were forced to either cut back on the royalties to which they have every right under law, or see their resource industries decamp in droves.

Alberta speedily led the way in cutting its share of the royalty take and calling for yet another hike in prices to aid the companies. This year, we can expect oil industry profits to rise from the stupendous to the obscene, but there is no guarantee the new money will be ploughed back into exploration. Ottawa has destroyed the royalty leverage by which the provinces could direct development, but has supplied no new directives of its own.

This action was not taken in line with the federal government’s national energy policy, because there is none; it was a simple, naked exercise of power.

Eric Kierans, a Montreal economist who has had the benefit of cabinet experience at both the federal and provincial levels, argues that “if they get away with this, I wouldn’t ever give a damn about any provincial election. It wouldn’t matter . . . the premiers have been reduced to the level of mayors.”

We are in for months of name-calling, bickering, stalling, lawsuits, counter-suits, nitpicking and bamboozlement between the federal government and the provinces. In the end, there will be some sort of saw-off — despite Ottawa’s present stern tone — because the provinces’ legal position appears quite strong. In the meantime, there will be total confusion in the resource sector; private capital will be unwilling to invest in development and the public capital that should be doing the job will be blocked by Turner’s blunt warning that “any provincial government which uses this budget to nationalize an industry better think about it very carefully.” (That was a veiled reference to a Ways and Means resolution tabled with the budget, under which natural resource producers could be taxed at “fair market value” if they sell to provincial crown corporations at below market prices).

So development will be stalled, resource policy suspended and we will be treated to the sight of federal and provincial politicians screaming at each other for the next several months. And for what? So that John Turner could show us what a tough guy he is, and the Trudeau government could once more exercise its talent for confrontation politics. The development of this nation’s resources and the handling of its new wealth are challenge enough for all Canadians at all levels of government; it’s a pity the federal Liberals haven’t learned, yet, that there is a Canada outside Ottawa. 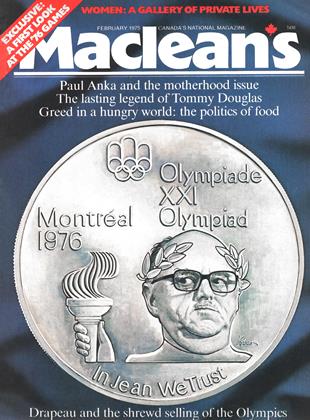