Last December 9, Eric Kierans came to dinner in Ottawa. His hosts for the occasion, at the Chateau Laurier Hotel, were a couple of chaps from Manitoba — Sid Green, Minister of Mines, Resources and Environmental Management, and Ed Schreyer, Premier. They wanted Kierans, who is a professor of economics at McGill University, a former Liberal cabinet minister in Quebec and Ottawa, a millionaire and a professional hell-raiser, to run for the leadership of the New Democratic Party.

They told him he was practically a shoo-in. Ed Broadbent, the NDP parliamentary leader and heir apparent to David Lewis’ battleworn mantle, was a nice enough fellow, but everybody’s second choice. No one could guarantee the convention outcome — the NDP rank and file tend to be more prickly and less predictable than the other parties’ stalwarts — but the thing looked like a snap. Not only were substantial Manitobans like themselves behind Kierans, so were influential types in Saskatchewan and BC. Some of the federal NDP caucus members, while shy in public, were privately aflame and there was even, for Pete’s sake, cheering news from Quebec. Sid Green had been talking to Claude Ryan, prestigious editor of the prestigious Le Devoir, and there was no doubt about Ryan’s view: ça marche avec Kierans.

Kierans was flattered, but not tempted. He doesn’t belong to the NDP — although he has put up money for some individual candidates — he is not a socialist, and was far from sure, despite all the brave talk around the dinner table that night, that an outsider could walk in and trot away with the NDP leadership. “It seemed to me they were playing games at the expense of Ed Broadbent,” Kierans said. “I listened, because I said I would listen, but that’s all.”

Word of this quiet dinner party quickly sifted back to Broadbent. He says he was more amused than hurt by the notion that party insiders, including members of his own small caucus, were out beating the bushes for alternatives to him. Not long afterward, however, Broadbent announced that he would not, after all, be running at the leadership convention in July because he wanted to spend more time with his family. He said the Kierans affair had “nothing, absolutely nothing — and I want you to believe this, because it’s the truth — to do with my decision to pull back.” He said he would be “very disappointed” if anyone were to write that he had withdrawn in a huff and hinted pretty strongly that he could have wiped the floor with Kierans, and maybe on the first ballot, at that.

It is sometimes the lot of the political observer to cause disappointment. I think the flirtation with Kierans did have something to do with Broadbent’s decision. A party insider and friend of Broadbent’s retreated into a time - honored cliché when I raised the subject. “It was the straw that broke the camel’s back,” he said. “Ed had been doing a damn good job in caucus, in the House and in the party, but he was still number two on everybody’s list. People were saying — and you guys in the press were saying — ‘Ed’s okay, but hell,

haven’t we got anything better?’ Then it turns out that there’s a bunch of influential guys running around trying to line up a Montreal millionaire who isn’t even one of us, and hand him the job. If you were Broadbent, what would you think?”

It’s a funny thing about the NDP. In principle, the party, like its predecessor, the CCF, has always been opposed to the notion of a strong, charismatic leader. But in fact, the CCF and NDP have always been led by towering men, myths in their own time — J. S. Woodsworth, M. J. Coldwell, T. C. Douglas, David Lewis.

On paper, Broadbent would have been a near-ideal leader for the NDP, a man who is attractive, quick, intelligent and ideologically well over to the left — which is the direction the party will have to go to keep from being trampled by the Liberals and Tories. In the long, bitter battle over party finances, he showed himself to be tough enough to lead, and smart enough to bend. (The new electoral expenses law, which makes party donations tax deductible, is a small bonanza for the NDP. There was a hell of a row over the new money, with most of the provincial sections — the real power base of the party — clamoring for the lion’s share, and the federal leadership demanding a sound financial base. Broadbent put his job on the line twice during the fight; he got much of what he wanted, including funds for a full-time organizer and full-time research director in Ottawa. The provinces will still get most of the take.) Even so, all the party members who were wildly enthusiastic about Broadbent could be accommodated in a House of Commons closet.

What the NDP needs is a steady guide for the next few years; what it wants is a bush-burner, a new and compelling figure — like Kierans.

“We may be opposed to presidential politics,” as Broadbent told me ruefully, “but we sure as hell follow them.”

Broadbent’s decision not to run has been widely interpreted as a sign that the NDP is back where it started at the 1961 founding convention. Not so. The NDP now heads three provincial governments, it has more money and more members than ever before and a large and growing body of expertise in two essential areas — how to run campaigns and how to govern. The party’s retreat from grace in 1974 (down to 16 seats from 31) was a setback, not a fatal blow. The NDP will still be around five years from now and so will Broadbent. By that time, his children will be older, his wife will probably be back at work, and his worry (and it was a real worry) that he was about to sacrifice his family to politics will be less acute. He may well run for the leadership again. Perhaps by then the party will have changed its mind about what it wants in a leader or Broadbent will have assumed a more glamorous image in the Canadian mind.

In the meantime, the NDP leadership race is wide open and the party’s movers and shakers are casting around ever more frantically for likely suspects. If you get a call, don’t dismiss the notion out of hand; insist at least on dinner at the Chateau — the food is pretty good. 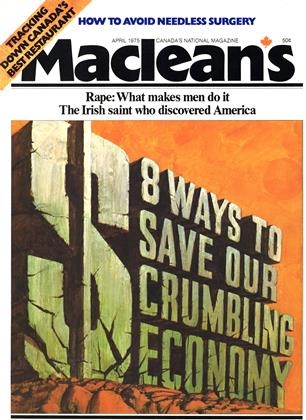