WHAT DID YOU DO IN THE SEVENTIES DADA? Marci McDonald May 1 1975

Up at General Idea Inc., the general idea of the moment was decidedly glum. Word had just come down that the Art Gallery of Ontario had canceled their gala annual rehearsal for the 1984 Miss General Idea Pageant and at General Idea headquarters, upstairs in the third-floor walk-up over Mr. Arnold’s 24-hour Body Rub, it was a little like Picasso getting the news that cubism was nice, sure, but did he really have to mess up the picture with all those little squares?

“They said it wasn’t the sort of thing they wanted in their gallery,” reported A. A. Bronson reclining in his tennis sneakers and vermilion coiffure with color-coordinated eyebrows. “We’ll have to recycle,” philosophized Ron Gabe (above), his own hairdo managing to combine a Buster Brown cut and mid-back mane simultaneously. “It’s collage or perish,” offered Jorge Saia, always ready with a General Idea catchphrase in the crunch. The trouble was, as A. A. admitted, “They didn’t know what to expect from us.” But then nobody has been quite sure what to expect from the three-man Toronto artists’ co-op ever since they met seven years ago, discovered that their art belonged to Dada and staged their first group show: a month-long dress shop entitled Betty’s Frocks.

In the intervening years, with inspiration from stage, screen and the Venetian blind, they have devoted themselves to fudging the line between life and art by taking the pop artifacts of everyday existence and exalting them to wild puton proportions. In the spirit of Marcel Duchamp before them, they have cast one long jaundiced look on 20th-century culture and turned the other tongue-in-cheek. The beauty pageant, the pictorial glossy, the humble household cliché — nothing has been sacred. And like their precursors of 60 years ago, who coined Dada as an absurd reaction to a society gone berserk with rampant materialism and the First World War, they have ventured out into the helter-skelter of these crumbling times and imposed their own witty kind of chaos upon the chaos. In the process, to put it mildly, they have been regarded as raving lunatics.

Not, of course, that there was anything particularly ordinary about their 1971 Miss General Idea Pageant, a $2,000 extravaganza later billed as “Canada’s first surrealist evening” and staged at the Art Gallery of Ontario, which may explain the gallery’s current attitude. With a glittering guest list of 450, it featured the dazzle of Hollywood searchlights, a parade of celebrities such as Mr. Peanut disembarking from limousines and 400 candles onstage where General Idea chanteuse Pascal, then in the throes of hormone shots for a sex change, demonstrated his-her remarkable new four-octave range with a rendition of I’ve Got You Under My Skin.

The 13 handpicked contestants were each judged on their creativity with a little 1930s liver-colored taffeta number left over from Betty’s Frocks and rechristened the Miss General Idea Gown. Considering that one runner-up had set fire to the dress while wearing it, then submitted the photos and the ashes, it was no easy contest. But finally at the climactic moment, to the strains of I Get Ideas, a Vancouver gentleman

named Marcel Dot was presented with the winner’s bouquet. The second it was over General Idea vowed to make the pageant a continuing work, their next spectacular set for 1984 with a solid 10 years of rehearsal beforehand. As A. A. explained, “The beauty pageant seems somehow to capture perfectly what North America is all about.”

Their other major continuing work has not caused fewer raised eyebrows. Two years ago, when the Local Initiatives Program doled out a $17,000 grant to a modest sounding underground art magazine, LIP was not quite prepared for what turned out to be File magazine, a witty, outrageous clip-and-paste compilation of visual puns and assorted Canadian Dada all wrapped up in a glossy exact-size replica of a Life magazine cover, which immediately inspired Andy Warhol to take out a subscription and Time-Life Inc. to take out a lawsuit. The LIP grant was not renewed. But none of it gave General Idea any pause. “Life made America what it is today,” said A. A. “Life gave the illusion that anybody can grow up to be president or a beauty queen. We give the illusion that anybody can grow up to be an artist.”

In the seven sporadic issues since, File has been turned into a kind of international Dada correspondence clearinghouse and built up a devoted 3,000-name underground subscription list from Spence Bay in the Northwest Territories to the Cameroons, from New York to San Francisco, Japan to Italy. It has been exhibited in Paris, celebrated in Esquire and even acquired the ultimate homage, a put-on of its own takeoff by a San Francisco Dada group called Vile. Still, here at home in Canada, almost nothing has been written or heard about either General Idea or File.

“It’s the put-on syndrome,” said A. A. “Everybody’s afraid that it’s all a joke and that we’re going to embarrass them.” It was a thought, in fact, that had crossed my own mind as I climbed the stairs up through Mr. Arnold’s massage parlor (“Free shoeshine by one of our beautiful topless attendants!! No obligation!!”). But what I found there were three bright, funny, gentle men in an airy loft alive with mirrors and hanging plants — an island of apparent sanity above the plastic porno wasteland below. It is downstairs at Mr. Arnold’s that most major credit cards are accepted; upstairs the boys at General Idea, with their send-ups of Miss America and Life magazine, are regarded as the freaks.

In an age when Watergate has brought the wonders of official doublespeak into our very own living rooms, one can’t help but wonder what is so strange about General Idea spouting cliché send-ups such as Banal Retentive and Ambiguity Without Contradiction. In an era when Kuwaiti sheikhs can toss their millions into the Monte Carlo roulette wheels while starving people dine on dog food, what is so odd about poking fun at the hollow heart of the -20th-century dream? General Idea has trained its mirrors on a distorted society and come up with a Fun House reflection. In these strange and troubled times, a tongue-in-cheek may well be worth a bird-in-the-hand. 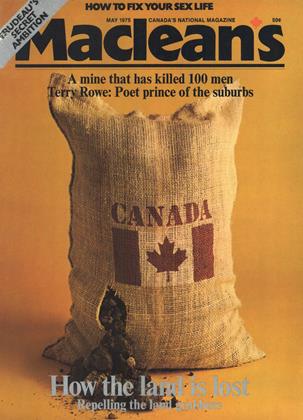