Now, in one of those rare lulls between federal-provincial conferences — with the shrieks from the April energy meeting ebbing and the agenda for the next just firming up — seems a good time to examine this new level of government. It stinks. Or, to put it in the more measured terms of the political scientist, the federal-provincial conference, while it provides a useful interface between representatives of the various governments, lacks the requisite input from those most vitally affected, the voters. As I said, it stinks.

Consider the April energy conference as a representative example. What happened? Word went out that the boys had to come to Ottawa to work out the next round of price hikes in the oil and gas business. Alberta, wobbling on top of a stack of dollars snatched in the last round, said it needed more. Ontario, suffering a small decline in its normal financial bloat, said to hell with that. Saskatchewan and BC, torn between their natural greed as producers (BC of gas, Saskatchewan of oil) and their natural stinginess as consumers, said, well, okay, but the new money had to be earmarked for energy development. Ottawa, with one eye on the millions to be made from its tax rake-off, allowed that another hike would be nice. In the wings, the oil companies alternated between anticipation and terror, as they wondered whether (a) they were going to get to add to their swollen coffers or (b) they would have to allocate any of the new profits — vital, they kept telling us, for exploration and development — to exploration and development.

That was Round One, and it all took place long before the Ottawa meeting. Round Two consisted of premiers, cabinet ministers, bureaucrats and lobbyists shuffling around the country, exchanging memos, insults and position papers in a vain attempt to shift each other off the stances struck in Round One. Air Canada and Mother Bell did well out of Round Two; nobody else made a dime.

Round Three consisted of press conferences, background briefings, deep background briefings and planted leaks to the press. Round Four was the conference itself, and there, under the klieg lights in what used to be a perfectly harmless railway station in downtown Ottawa, the 11 perfect masters trotted out the views that by now had grown green with age and stiff with exercise. In Round Five, everybody retired behind closed doors to say the same things a little more bluntly so that they could, in Round Six, leak to the press their own varying versions of what was really going on. Then they all went home, except Prime Minister Trudeau, who lives there, to warm up for Round Seven, an exchange of letters laying the ground rules for (guess what?) a new conference.

For the public, this kind of performance is either dismal or dangerous. It is dismal when nothing happens — all that shouting, all that striking of postures, waving of arms, issuing of challenges, raking over old scores, dreaming up of new ones, with nothing to show, in the end, but several miles of exposed TV film. But when decisions are made it is dangerous, because the nub of the federal-provincial conference is

that it exercises power without responsibility and it permits politicians to strike deals out of sight.

When they hop on their chargers and gallop down to Ottawa, who the hell are these guys, anyway? Does Battling Bill Davis, because he is Premier of Ontario, represent me when he swells inside his stuffed shirt and says nuts to everybody else? Or is it Donald Macdonald, the Minister of Energy, also from Ontario, who stands on guard for my interests when he offers up untold and unspecified millions to the oil companies and tells them to keep the change? I don’t know, nobody knows.

The essence of democracy is that the voter must be able to reward those who advance his views and punish those who obstruct his interests by casting his vote accordingly. The essence of the federal-provincial conference is that it spreads around the guilt and the glory in a collective decision for which no single government is responsible and to which no single voter can react. Television time for everyone, blame for no one. It is a fraud.

Worse than that, all the real wheeling and dealing is done in secret. This, we are told, allows the participants to speak more freely. And what do they say, these powerful men, once freed from the rude public gaze? Apparently Premier Barrett of BC said he thought the federal government was wrong to push its wage-restraint program at the very time when all the MPs were rushing to the trough for another pay raise, and the Prime Minister replied, “This is the last field from which I expected to get this kind of crap.” I’m sorry we missed that.

If it weren’t for one little thing, it would be possible for the first ministers to spend all their time off camera shooting craps, or working out a deal to sell out the whole joint to ITT and have done with it. The one little thing is that everybody knows everybody else is going to leak his version of the closed meetings to the press as fast as his lips will move and his Xerox machine will roll. The secret meetings aren’t really secret, they are merely garbled.

Enough. There is no place in the Canadian constitution or parliamentary practice for this new level of government. When these meetings were held once every decade or so they served a useful purpose. But when they are used — as now — merely to grab off TV time for electioneering premiers and allow the federal government to dodge its responsibility to lead, then they are a fraud, a double fraud, a dangerous fraud.

If the federal cabinet wants to know what the country thinks of what it is doing, let it ask the MPs — that’s what they are overpaid for; if it wants a mandate for what it is about to do, let it put the issue to the country squarely, in a referendum (remember referendums?). But this business of calling everybody down to Ottawa so that later, when everything turns to mud, each political leader can quickly turn around and say, “Don’t blame me — Billy done it,” this business is nothing but a travesty. 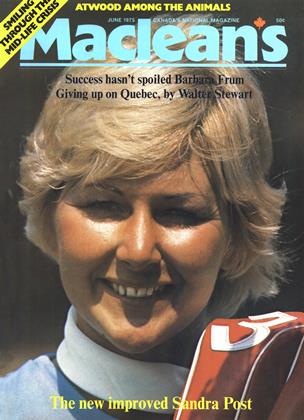