Golf is a game for pretenders: you are not an 18-handicap duffer, but Johnny Miller. If you sink this tortuous, 35-foot putt, with the hushed gallery looking on, you win the Masters, the British Open, the Grand Slam. Keep your head down and knock the little white ball into the round hole. Remember to smile when the tournament director hands you a cheque for $50,000. Play four fine rounds of golf and you become the idol of millions. That is sport’s most accessible fantasy, a midsummer afternoon’s dream.

Some people take their dreams seriously, particularly professional golfers. Every year, more and better players roll off the assembly line of the American golf colleges to challenge the hegemony of the Nicklauses and the Weiskopfs. Last year, 488 golfers won money in the Professional Golfers’ Association’s 58 tournaments. But most of them came away with little more than a pittance.

Fewer than half made even $1,500, a capital gain that makes the poverty line look attractive. Only 144 players earned $10,000 — the rock-bottom minimum needed to sustain oneself on the tour from January through October. Only 98 golfers made $25,000 or more — hardly an exorbitant income in these inflationary times. And only 44 players in PGA history have made $100,000 in a single season.

One of those who hasn’t is Oeniphrus Franciscus Homeniuk (above), sometimes known as C.W., but more commonly known as Wilf. Homeniuk — perhaps the best-known Canadian golfer after George Knudson — is almost 40 now, a veteran of 10 years on a tough circuit where just handing in a scorecard is a kind of achievement.

His 1975 performance to date has been downright embarrassing. In the first six tournaments of the year he missed qualifying for the final two rounds four times. On one occasion, he scored well in the Pro-Am preliminary rounds and cashed a cheque for $21.43. His total winnings for the year so far: $437.12. Clearly, this is not the stuff of which golf legends are made.

For Homeniuk, frugality is a way of life: a diet of hot dogs and hamburgers, cheap motels and a 1971 Oldsmobile that has logged 115,000 miles and still has its original battery. “I cross myself every time I start her up,” he says. “When I take that battery out, I’m going to have me an antique.”

It is small consolation, but Homeniuk is familiar with hard times. During the Depression, his family was forced off their Kamsack, Saskatchewan, farm into neighboring Yorkton. There Oeniphrus Franciscus (his baptized name) spent more time on the golf course than he did in school. The whole family golfed; one year, Homeniuk and six brothers won eight prizes in a provincial tournament. And Wilf himself had won half a dozen amateur titles by the time he turned 18.

Later, as an assistant pro to Danny Stack at Winnipeg’s Glendale Golf and Country Club, he decided to test himself on the American tour. “It was no good being a big fish in a little pond,” he says. “If you want to become a golfer, you have to go to the U.S.” The Glendale membership gave him a royal send-off and financial support to keep him going for a year. There were some who doubted he could make it. “I told him he was wasting his time,” recalls club manager George Gershman. “I told him he’d be better off going to work in Irving Averbach’s salami factory.”

Homeniuk liked salami, but he liked golf better. And he had some early minor successes, winning the Peru Open in 1965 and the Panama Open in 1966. Canadian sportswriters saluted the “Winnipeg bantam” — Homeniuk is 5'7" and weighs 150 pounds — who seemed just a chip shot away from the Big Money. Now, a wife, three children, and 10 years later, he is still lining up that shot, still waiting to cash a first place cheque for more than $3,500. “He’s got all the shots in the bag,” says Stack, now retired. “But somehow he hasn’t been able to put them all together.”

Opinions vary on just why Homeniuk has fallen short. Some contend he is too slight, though size never hampered Ben Hogan, Gardner Dickenson or Chichi Rodriguez. Others say he tries too hard or that he lacks the pro golfer’s essential characteristic, confidence. Probably his most consistent weakness has been on the greens.

Whatever the reason, few players are more dedicated to their game. Homeniuk spends hours polishing his skills. He starts his typical day by hitting 100 golf balls and playing 18 holes. Then he putts for an hour, chips for an hour and blasts trap shots for another hour. He undertook a special exercise program to develop his arm and wrist muscles, and put on 15 pounds hoping to add yards to his drives. He doesn’t drink or smoke. He has been known to pass up dinner invitations to attend the touring golfers’ Tuesday night religious services and he is given to simple moralistic statements about life, spoken in a laconic, Southernized drawl. “There are no shortcuts to success,” he says, reflecting on his own situation. “Life is not handed to you on a silver platter.” Once, when Glendale member Max Wolinsky offered to loan him a few thousand dollars, Homeniuk turned him down; his golf game may be erratic, but his pride remains intact.

Every golfer on the tour, dreaming of the jackpot, must decide whether he can wait until he wins and, if he can wait, whether he will win. Homeniuk cannot wait much longer. The competition stiffens every year and as his wife Jean says: “It’s hard on the children when Daddy’s away.”

Homeniuk this winter sent letters to a dozen Canadian golf clubs, applying for a pro’s job. But when I spoke to him in April, he hadn’t conceded defeat. “I’m planning to make $100,000 this year. I’ll sell you a share of me for $25,000 and we’ll split anything over that. What d’ya say?”

God bless you, Wilf. I hope you get that pro’s job. 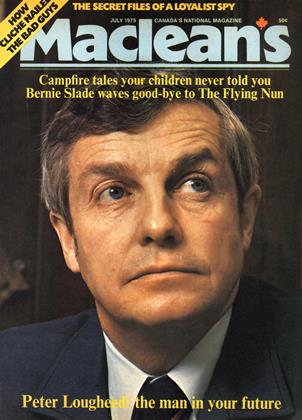