I remember vividly the day I officially became a feminist. It was in 1971, in England, after two years of travel during which not a breath of what had been happening among women in North America had reached me. But in London a woman friend shoved into my hands a stack of papers that had been mailed to her from a feminist friend in California, and said: read this. I read it. When I was finished, I was a committed member of the Women’s Liberation Movement.

The Toronto Women’s Caucus, the Toronto Women’s Liberation Movement, and the Radical Feminists had all been established by the time I returned to Canada in late ^71. They were holding meetings, putting out newsletters, organizing rallies. I never joined any of these “parties,” and I remember going to the meetings with a confusion of feelings: astonished that we were all voluntarily spending time away from men; excited about the things we had the nerve to say about our personal lives; relieved beyond measure that it was safer for me to confess that I had often been angry and bitter and sad about the things that had happened to me; and deeply moved by the glue that held all of this together, compassion and tenderness.

But something else made us stick together too. It was called “man-hating” by our detractors. But I called it “going clear,” and it made me really high. Well, my father and my husband and some of my friends were okay but all the rest of them out there were real bastards, ripping me off right and left. The venom and hostility that poured out of me was enormously satisfying. Women friends would nod encouragement. “Yeah, right on, I know what you mean.” It was a genuine purge.

But then it was purged and I had to go on to something else. The flipside of hating men was loving women, and so I explored this. It was easy. I had always enjoyed my relationships with women. Now it became a matter of going beyond that, reaching out to each woman I met as a “sister.” It also meant studying women’s history, reading about marriage laws in ancient Rome, the economic role of the housewife, the origin of matriarchal myths. It was the most exciting intellectual work I had ever done. I was researching the history of me!

I taught women’s studies at the University of Toronto, watching like a brood hen as young women went through the same process as I had. We sat in circles and chatted, being careful to be “supportive” and watching for the least sign of “anti-woman” feeling. It always made me feel guilty to give a student a low mark on a bad paper. There was something vaguely “unsisterly” about that.

I was now spending most of my time with women. Gone were the days when I wished to be surrounded by admiring men. Good riddance. I did most of my writing about women and I got letters from readers saying how much it meant to them that I said the things I did. I listened to a friend talk about her hassles with her husband about housework and child care. I saw other friends leave their marriages and set up communes together. I stood in the cold wind of City Hall square shouting slogans. I went to a women’s medical clinic and took home with me my own plastic speculum. I leafletted secretarial offices. I thought, in those days, that I was in the middle of something that was going to shake the world apart.

It was downhill from there. Slowly but surely. The feminist “parties” fell apart, some to end up in far right field as lesbians, others in far left among the male-dominated leftist sects. The rest of us struggled in the limbo between. I continued to do bits and pieces of things — teaching, writing, going to conferences, arguing with male friends, becoming friends again with my mother — but I began to lose sight of what all these bits and pieces were supposed to lead up to. There never had been a central planning committee for the movement and now there didn’t even seem to be a common goal. Nervously I asked my feminist friends: when is Otto Lang going to change the abortion laws, the rape laws, the marriage laws? Maybe we should get jobs in factories and help women organize? Do you think they even notice these hostile posters we make at the Women’s Centre? Do you suppose I should have absolutely nothing to do with men, would that help? Have we really hit men where it hurts? What is the proper strategy? “Well,” they said, “you do what you can do. What this is about is changing people’s attitudes, don’t you see? It takes a long time.”

But the doubts were imbedded and the passion was gone. I saw some of my friends strike out on their own, making careers for themselves as professional “libbers.” I saw others lose themselves in “style,” pretending their crazy clothes and bizarre sexual tastes were proofs of a personal liberation. I saw still others spend their energy in theoretical debates, working out “correct” perspectives and positions. As for me, I became interested in Bob Dylan again, I fantasized about a shack in BC and I never did buy a Helen Reddy album.

But I’m still a feminist. I still believe that women are an exploited group in our society. And there’s no denying the women’s movement has made a lot of noise. We pushed and we shoved. But nothing moved. Oh, a few shuffles here and there. A royal commission, a cabinet post or two, here a law reform, there a revised curriculum. But the nitty-gritty runs on in the same old ways. A friend is raped. A colleague is underpaid. My grandmother struggles on a pension. My neighbor is pregnant again.

What is our strategy against all this? We don’t believe in pamphlets, rallies and petitions anymore — we’ve stopped doing them. We can vote for Flora MacDonald, but does she really see the world the same as I do? We can free Dr. Morgentaler but what can we do for all the women who never get near a hospital committee? I can “hate men” but many of them are in the same spot as I am: co-opted, ripped-off and mad. I, for one, am withdrawing to think about all this. Meanwhile, maybe all those women around the country who need immediate and drastic change now will just go ahead and achieve it where they are, in their kitchens, their offices, their factories. Won’t Gloria Steinern be surprised? 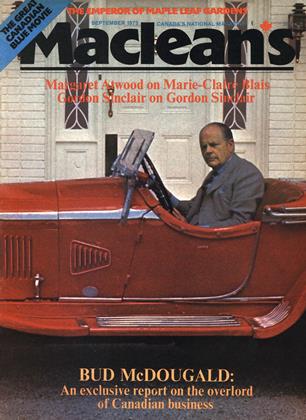