For two days the medicine man danced, sang and called to the spirits of the dead. He had a problem to solve. In the 3,000member Ojibway reserve on the eastern end of Manitoulin Island on Lake Huron, death by suicide has come with frightening frequency. In the past year, seven of 38 families living in the tiny village of Kaboni have lost a son or daughter to a bullet from a .22-calibre rifle, a crudely made noose or a fistful of pills. (Another 34 have attempted suicide more than once.) In this one small area of farms, isolated and picturesque, the suicide rate is now 10 to 20 times the national average. All of the victims were young, single and lonely. The Indians whisper about the return of the “bear walk curse,” and not having their own medicine man they called one in from an American Dakotas tribe. “Why Kaboni?” spirits they from uals, he asked told their said the him. them Indians old After what beliefs. performing he had had That’s learned: strayed why his the too the ritfar young people were killing themselves.

In its own way, an inquest, called recently by local Coroner Jack Bailey to look into the “epidemic” of suicides, came I to the same conclusion. Sudbury psychiatrist Dr. John Ward, summoned to investigate the suicides, described the victims, all between the ages of 17 and 31, as on found “loners” troubled in their with families deteriorating no self-esteem. for support, homes Dependent what was they illness, alcoholism and poverty. “They were people with very few resources,” says Ward, who also points to the cultural conIflicts be cation, a “second-rate dividing a job and the white a community—the man” car, with and an the pull push eduto reto tain old values and rituals. “The suicide group tended to fall in the middle,” says Ward. “They were left stranded by social conflict.” The reserve is better off than most, surviving on some cattle raising and welfare, but Ward says that it is “isolation much more than poverty that causes suicides.” One 20-year-old girl left a message inked on her leg: “I hate myself—true.” She also left a note for a nonexistent lover.

The inquest’s all-Indian jury made a number of recommendations, now slowly being implemented. It asked the appropriate governments for more counselors to help broken families (there is only one counselor on the reserve now). It asked for recreational facilities for a community where the main distractions are drinking and fighting. It asked for a home for troubled children and a mental health clinic. But mostly it asked for ways to revive Indian culture, especially at the high-school level. Indian children leaving grade school are bused as much as 60 miles to a big modern, school which serves all native and white students on Manitoulin Island. Among native children absenteeism is common and the dropout rate high, the result of “culture shock” at meeting the outside world for the first time, says Indian high-school trustee Alex Fox. Adds a former teacher, Mary-Lou Fox, herself an Indian: “The kids never really learn anything about being Indian. The school is supposed to be an extension of the home, but it isn’t.”

Skepticism persists among the Indians of Kaboni that such changes will stop the suicides. Some of them say the deaths were inevitable, that they had a certain dignity. The Indians regarded the inquest as “an intrusion into a private personal tragedy,” says Coroner Bailey, a general practitioner in Little Current, the island’s main town. Now that the medicine man has come and gone, says Alex Fox, “we know a little what is wrong, what we must do, and we’ll take care of it.” But the fear of the bear walk curse remains. It first came to the attention of outsiders about 20 years ago when an Indian accused of killing his father blamed his actions on the “bear walk.” Many Indians believe that if a medicine man places the curse on an individual or family, it can cause illness, abnormal actions or misfortune. One native studies expert says the name comes from the fact that victims are believed to take on a bear-like gait.

Gabriel Aibens has lost two of his nine children to suicide—one of them just hours after the inquest ended. Aibens is a Roman Catholic and will not talk of the possibility of a medicine man’s curse. “God will take people away and there’s not too much people can do. It’s beyond our power.” Aibens himself has had both his legs amputated because of a blood disease, so he sits in a wheelchair, apart from a television set, the only new and bright object in the tworoom shack that is his home. “The bad things happening seem to be a month apart,” he says in Ojibway to a counselor. “Either an accident or a suicide. I guess it will happen again. If anybody could stop it, they should try.”

Twenty-four-year-old Simon Aibens was the first to go on November 1. He had been drinking heavily when in the middle of the night he went into a bedroom where his sister and two children were sleeping and shot himself. He had talked of a premonition and given away his television set in preparation for death. “It was a definite thing,” says his father. “There didn’t seem to be anything we could do about it.” Phillip Aibens, 27, took an overdose of pills one and a half months later. But the father doesn’t think too much about the dead. He has the living to worry about. His 22-yearold daughter Shirley, an unmarried mother, is in psychiatric hospital after attempting suicide. Another son is dropping out of school.

The real curse afflicting the Indians of Manitoulin Island is, as the medicine man and the Sudbury psychiatrist seemed to agree, lack of identity. Young Indians on this reserve, as in many others, are finding that without self-respect they can’t function in a white man’s world. Worse, they can no longer function in their own. After years of watching their language deteriorate and their parents chasing the white man’s dreams, the young are looking for ways to go back. “What they see in the white man’s world, they don’t value,” says Alex Fox. “But it’s not enough just to say, ‘I’m Indian.’ The culture must be imbedded in us. Otherwise, we will be disoriented.” And, he might have added, the suicides will continue to devastate in Kaboni.

On some reserves, Red Power is being translated into Red Capitalism (see page 49). 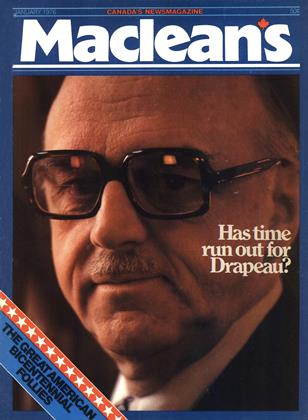