For 11 years, slender, dark-haired Marie-Andrée Leclerc worked as a medical secretary at a clinic in Levis, Quebec, across the St. Lawrence river from Quebec City. She planned to marry her accountant boy-friend André Bernier. Then the couple took off last year for a long-awaited dream vacation in India. It was during that trip,

according to Bernier, that Marie-Andrée had a fateful meeting with a man named Charles Sobhraj, a 32-year-old charmer and dealer in precious stones who operated under a variety of aliases—Alain Gauthier, Alain Dupuis, Charles Dumurcq, Jean Belmont and Eric Dumour. In the opinion of Indian police, Sobhraj’s real business was robbery and murder and the convent-educated Leclerc was his lover and principal accomplice in a gory epic of bloodshed and intrigue that left police forces across southeast Asia investigating 16 murders and thefts from drugged victims who lived to tell the tale. In July, Leclerc, 31, was arrested by Indian police on suspicion of extortion, fraud, theft, kidnapping and murder—for which she could be hanged.

Leclerc met Sobhraj, who is of mixed French-Vietnamese and Indian parentage, outside a travel agency in Kashmir. It was, says ex-fiancé Bernier, “very' simple, just the way one meets a multitude of people in one’s life.” But Sobhraj seemed to exert a magnetic spell. By the summer of 1975, after Bernier and Leclerc had returned to Canada, Leclerc had been convinced by mail to return to Sobhraj, where she was installed in his lavish apartment in Bangkok, Thailand. The grisly crime spree was first noticed when an 18-year-old American girl, who was last seen alive in Sobhraj’s apartment, was found dead last October clad in a bikini, wrapped in a plastic bag and buried on a beach near Bangkok. At the end ofNovember the body of a Turk

who had dickered with Sobhraj over the sale of some diamonds was found drenched with gasoline and burned from the waist up on the same beach. Later, the bodies of two Dutch travelers were found on a road south of Bangkok. In January, a British embassy memo sent to Bangkok police described “Gauthier” as a man “who in the course of his stone [jewel] business would frequent the lesser-known hotels in Bangkok, picking up young persons whom he would discover had travelers’ cheques, befriend them on the pretext of buying stones, take them back to his flat where he would wine and dine them, invite them to stay, and ultimately extract their monies and valuables, disposing of them in the manner of (the Dutch couple).”

Thai police seemed reluctant to act. But after pressure from Dutch and U.S. diplomats this spring, they burst into the apartment where Sobhraj and Leclerc lived and found passports belonging to murder victims, hypodermic needles and bottles of strychnine. The two were taken to police headquarters, but released on bail. While police throughout southeast Asia began to piece together the macabre jigsaw, the lovers set out on travels that took them to Malaysia, Hong Kong, India, Pakistan, Switzerland, France, Germany and Turkey in less than a year. Fast December they were in Nepal, where police are now seeking their extradition on charges of murdering Canadian Faurent Carrier, 30, of Ottoburn, Manitoba, and American Connie Broenijeck, 29. After short hops back to Bangkok, Sobhraj and Leclerc were traced to Benares, India, where an Israeli was found drugged and strangled.

Sobhraj was finally arrested in New Delhi after a Frenchman was found dead in his hotel room. The man who had slipped through police hands so many times before had apparently grown careless. He was seen in the cities of Agra and Jaipur with a group of 60 French tourists who had been offered pills, supposedly to purify local water, and woke up in hospital after taking them. Some were able to identify photographs, and picked out Sobhraj.

Leclerc, who was arrested a few days later, also in New Delhi, has yet to be charged with any crime. And under the laws imposed by Indian Prime Minister Indira Gandhi it could be two years before that happens. In a message smuggled out of New Delhi’s Thiar prison, where she is being held, Leclerc, who insists that she is innocent, recently appealed to fellow Canadians: “Please help me everybody. Don’t abandon me, I beg you.” Former boyfriend Bernier has received communication from her and is still waiting but her Montreal lawyers, Raymond Daoust and Daniel Rock, feel there is little they can do now except hope for their client. Ottawa’s external affairs ministry is equally powerless. “We can’t interfere in the internal mechanisms of another country,” says Alec McNiven of External Affairs. LINDA DIEBEL 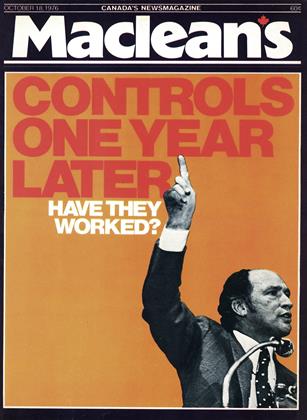