Trial by jury is an ancient right under English common law. So is protection against forced self-incrimination. Canadians have always enjoyed both rights when they found themselves accused of a crime. That they will continue to do so, however, is due in no small measure to the gritty performance last month of a Toronto trial lawyer named Arthur Whealy. It was Whealy, the 47-year-old president of the Criminal Lawyers Association in Ontario, who first tracked down, then exposed and thereby helped spike an astonishing federal proposal that would have attempted to improve trial efficiency at the expense of accused individuals. Draft legislation, since repudiated by Justice Minister Ron Basford, would have, among other things:

tences upon conviction being offered as compensation, and;

• Allowed prosecutors to deny accused persons a preliminary hearing, or, when such hearingsweregranted,to withhold details of the Crown’s case from the accused—unless the accused agreed to surrender his right to silence.

Rumors about major changes in the Criminal Code had been rife in legal circles ever since a strictly-off-the-record meeting in Vancouver last June among Basford and his provincial counterparts, the attorneys general. “They f the changes] were a hot topic of conversation all summer,” Whealy recalls. “Everyone was talking about them. They were supposed to be horrendous, but nobody had a copy.” Whealy asked federal officials in Ottawa about the rumors but no one would acknowledge any plans existed. Then, at a midsummer law conference in Sherbrooke, a prosecutor who had been discussing the matter intentionally left his copy of the secret proposals where Whealy could see it. What he read horrified Whealy. “1 couldn’t believe anyone would put that plan on paper for serious consideration. It was the most totalitarian piece of legislation I could imagine.”

Whjealy wanted a copy of his own, and put feelers out to everyone he could think of who might have one, a list that eventually stretched to 26 names. Finally his interest was rewarded. His secretary called him to report that a messenger had delivered a plain brown envelope. Inside was the draft legislation. “I don’t know who leaked it,” Whealy says, “and I don’t want to know. But I’m grateful to him.” Whealy called an all-night meeting of the directors of the Criminal Lawyers Association and they decided to make the document public.

There was immediate—and enraged— reaction. Dragged from a conference in Edmonton, Ontario ombudsman Arthur Maloney declared: “It disturbs me immensely to think there are officials in this country who have such a misguided conception of what justice should be. It must be nipped in the bud.” Criminal lawyers were appalled. “I thought I was reading the blueprint for 1984,” said Toronto defense attorney Harvey Salem.

meeting where the ideas were first discussed. Donald Christie, the associate deputy minister of justice who wrote the draft legislation, gallantly offered to carry the can for the gaffe, although he observed that none of the provincial representatives at a subsequent Yellowknife conference of high-level Justice officials raised objections. “It was my idea,” Christie cheerfully said. “I’m the author.”

While the public furor centred on the trial-by-jury issue, many criminal lawyers believed other proposals were more dangerous to fundamental freedoms. Prosecutors now must demonstrate that they have enough evidence to warrant a trial at a preliminary hearing, the first opportunity the accused has to hear the evidence

against him or to question prosecution witnesses in preparing a defense. The draft legislation would have changed all that: prosecutors would not be required to disclose their evidence unless the accused asked for it, but if he did he’d be required to give evidence under oath, thereby giving up his right to remain silent, a sharp challenge to the theory that it is the Crown’s responsibility to prove guilt, not the accused’s responsibility to prove his own innocence. The draft legislation also suggested judges have more freedom to accept affidavits as evidence, instead of requiring witnesses to appear. As one defense lawyer noted sourly, “You can’t cross-examine an affidavit.”

Defense lawyers feel that other safeguards which by tradition protect an accused person are gradually being whittled away. They cite Criminal Code amendments, made last April, which permit an accused to be tried in absentia in some circumstances. They also point to draft legislation that would allow tainted evidence to be heard, even if it was obtained illegally. “They all make it harder for the ordinary guy who says ‘I’m innocent’ to get a fair trial,” says Whealy.

Nevertheless, changes in the method of administering justice are urgently needed. Trials are often delayed because of procedural wrangles in the courts, and the price of justice has been rising steadily. The cost of operating federal courts has more than doubled in three years— from $43 million in 1973 toan estimated $86.1 million, this year—and provincial courts spend as much or more. Ontario, for example, will spend $102 million this year for the provincial court system and another $21 million for legal aid. Worse than the cost is the delay in bringing cases to trial. The problem is most acute in Montreal, Vancouver and Toronto where long, complicated trials—typically involving hundreds of hours of wiretap evidence—regularly tie up the courts. In Vancouver, a current drug-smuggling trial is expected to cost more than one million dollars to prosecute. No one will hazard a guess how long it will take. “You get three or four of those in the courts,” says Clay Powell, a highpowered Ontario prosecutor who switched to the defense last month, “and it isn’t long before the whole system grinds to a halt.”

The episode was not without irony for Arthur Whealy. He nurses an ambition to become a judge, and judges are appointed by the justice ministry. Whealy, of course, has embarrassed at least some senior Justice officials. One of Whealy’s colleagues says: “As far as a judgeship is concerned, he’s blown it.” But Whealy hopes otherwise. “If I ever had any hopes of an appointment to the bench, I don’t think they’ve been harmed. I don’t think the government appoints judges on the basis of whether they agree with them or not.” In other words, Whealy doesn’t think Ottawa would convict him without a trial—byjury or otherwise. WILLIAM DAMPIER 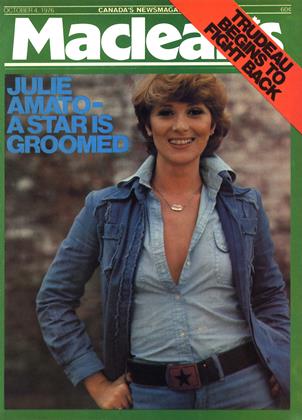