He who hesitates, Bourassa figured, might really be lost GRAHAM FRASER November 1 1976

For months, Quebec’s Premier Robert Bourassa had hinted at the prospect of a fall election. Then, late in October, a short video tape cassette went out from Liberal Party headquarters to television stations across the province, and the game was on. Quebeckers will go to the polls November 15 and the slogan that Bourassa’s Liberals had chosen to campaign under was blunt: Non au separatisme—Stop separatism. Other issues that could help or hinder Bourassa in his battle with René Lévesque's separatist Parti Québécois were very much in the air—including the debate in the rest of Canada over bilingualism, and the bitter divisions within Quebec over the Liberals’ unilingual Official Language Act, Bill 22. One thing seemed certain: Bourassa’s federalist Liberals were bound to fall short of their landslide 1973 victory. * The key question was where the lost Liberal votes would go—to Lévesque’s opposition PQ, or to a resurgent Union Nationale under Rodrique Biron.

In calling an election two years before his government's current mandate expires, Bourassa was clearly betting that if he waited longer his party's slumping fortunes would sag even further. In recent years, the Liberal government has been tarnished by a steady succession of scandals and, on top of that, the government almost certainly faces the prospect of having to raise taxes next year. The election campaign also will give Bourassa an opportunity to take on Quebec's fractious labor unions, which demonstrated their clout most recently during organized labor’s October 14 national Day Of Protest; while work stoppages across much of Canada fell below organized labor’s expectations, Quebec workers, many of them already on strike, brought life in the province nearly to a halt. Now Bourassa is

The mounting hostility to bilingualism in anglophone Canada provided ammunition for both the Liberals and the pq. René Lévesque, who is making his third attempt to win a seat in the National Assembly, planned to downplay his party’s separatist plank in favor of attacking the Liberals as corrupt and incompetent. But Lévesque seized on the occasion of the federal Liberals’ Throne Speech, which promised a new drive to sell bilingual programs across Canada, to predict that Canadians outside of Quebec were fed up with bilingualism. In English-speaking Canada, he declared, the “aversion to both the French language and to those who speak it is becoming visibly more pronounced.” Yet the resignation of federal defense minister James Richardson played neatly into Bourassa's hands. After Richardson quit to protest the proposed entrenchment of extended language rights in a repatriated Canadian Constitution, Bourassa was able to cite— as his ostensible reason for calling an early election—the need for a new mandate before heading into federal-provincial talks on the Constitution.

The other side of the election language issue is the educational provisions of Quebec City’s Bill 22, which, among other things, requires immigrant children whose mother tongue is neither French nor English to attend French-language

schools, unless they can pass Englishproficiency tests. Opposition to Bill 22 has led to the decision by some anglophone MNAS not to run again. Bourassa has managed to recruit other prominent critics of Bill 22 as candidates, which may help to defuse the issue. In their approaches to Bourassa, former Liberal ministers Jean Marchand and Bryce Mackasey both made modification of Bill 22 an apparent condition for their running as provincial Liberal candidates.

Bill 22 has badly shaken the traditional allegiance of Quebec’s 1.2 million anglophones to the Liberals, and the other parties are courting them avidly. The UN’s Biron, who may stand to gain some of the English-speaking vote, has promised to abolish Bill 22. The tiny Popular National Party, under former Liberal minister Jerome Choquette, would modify the law. Some English votes may go to a new political entry—the federalist Democratic Alliance, a left-oriented party that grew out of the reformist movement on Montreal city council. In the meantime, Quebec’s English-speaking community for the first time is beginning to think and act like a minority, feeling at times almost like hostages in the Quebec-Ottawa negotiations over language rights. When James Richardson quit, said a longtime anglophone resident of Quebec, “my first thought was, Sweet Jesus, here we are caught in the middle and he does something stupid like that.” GRAHAM FRASER 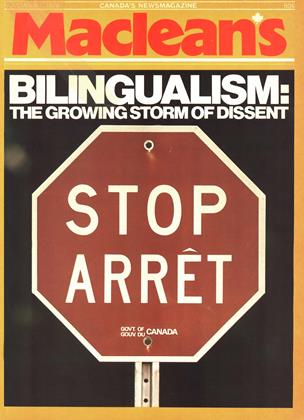