Life, as it tends to in 'The Townships,' goes on much as usual ROBERT LEWIS November 29 1976

Adelaide (Addie) Atkin is 59, a housewife and local correspondent in Georgeville, Quebec, for the weekly Stanstead Journal. She was born and raised in the resort community on the shores of Lake Memphremagog. So was her husband, Jack, a house painter, carpenter and head of the local community association. Unlike most communities in the Eastern Townships, south of Montreal, Georgeville has remained a predominantly English enclave. But it is typical of the others in a way that is striking in the wake of the Parti Québécois election victory—there is no visible sign of panic among the English. “Nobody here is going to pack up and leave,” Addie Atkin predicts firmly. “In fact, this could be a very exciting time. There aren’t many places to go and discover in the world anymore.”

In Cowansville, settled by the English in 1840, a prominent, bilingual businessman (requesting anonymity) observes: “We [English] have been a little smug. But that smugness started in [Montreal’s] Westmount not in the T ownships. English Canadians have had a good way of life in Quebec. Now French Canadians want a piece of the action—and I don’t blame them one bit. Let’s give Lévesque a chance.”

In Waterloo, an archetypal United Empire Loyalist settlement, 81-year-old Jack Buckland, one of the most prominent citizens, dismisses any thought of leaving town. “I’ve lived my life. The only place I’m going,” he chuckles with a wave across the street to the cemetary, “is over there.”

The calm among most Anglos of the Townships is based largely on the widespread, untested thesis that Quebec will never actually separate from Canada. The view is not shared by every one. Some are fearful and bitter, particularly the young married couples who are often unilingual and have built a good life for themselves and now see it threatened. But the prevailing mood, as perceived during a threeday tour that started at my home in Waterloo, seems to be one of abiding confidence in life close to the gently rolling countryside—and a faith that things will work out.

Their faith is based on the strong professional and social ties that have historically existed between the two founding cultures. In 1967, historian Dale Thomson, in his biography of Louis St. Laurent, wrote of the typical “Eastern Townships man” who “respected both cultures, took pride in the dual heritage of Canada, and drew on them to enrich his own life.” Strains have developed in the fabric since St. Laurent’s Township days, in fact since Thomson’s book. The descendants of pioneers from Ireland, Scotland and the United States are now outnumbered in most of the towns they built and nurtured. The English now may be discovering how the old French minorities had to struggle in an alien Anglo milieu, but they show no signs of fading away. “After all,” notes Ralph Campbell, now retired with his wife, Lorena, in Waterloo “this is our ‘homeland’ as well. Our families have been here for generations.”

Politically, the colors of the Townships’ new electoral map are as varied as a sugar bush in autumn. Of the nine counties, all but one of which were Liberal before the election, four are now Union Nationale, two Liberal and three—including two seats in Sherbrooke, “the Queen City of the Townships”—elected PQ members. In Brôme-Missisquoi, a riding once carefully drawn to ensure representation for the English minority, 20-year veteran Liberal Glen Brown lost to the UN’s Armand Russell, thanks in large part to Anglo opposition to Bill 22 and the fact that Brown did not oppose it. Even so, one of Sherbrooke’s new péquistes, 31-year-old social worker

Gérard Gosselin, spoke of “a new partnership” between English and French. “I have a real respect for the English,” he declared, “but I also have respect for my own people.”

Respect is an appropriate term for what is bound to be an upcoming period of new tension. Even facing new political realities, too many Anglos still cling stubbornly to old ways. One middle-aged secretary in the Waterloo area, for example, has learned only the crudest French and insists on speaking English because, as she puts it, “I won’t give in.” At the same time, she has good relations with French-Canadian neighbors—they talk to her in English. Says an anglophone entrepreneur, who also has several close francophone friends and speaks French fluently, “Our family has been here for generations, the French have taken over businesses, we’ve learned their language—what more do they want?”

The grudging acceptance of the French fact is tied to the stake the English feel they have in the Townships. Jack Buckland’s wife, Alice, for example, is a descendant of wealthy families who built Waterloo, donated land for churches of all denominations and often financed personally public works projects the town wouldn’t fund.

Many of the Townships’ residents are committed more because of economics than from any sense of history. Stanley Mount, 61, and his son-in-law, Allen Barr, 34, of Iron Hill, own a fine 120-head Ayrshire herd on a farm complete with an automated eight-stall “milking parlor.” They also sell sand and gravel from a pit on their 320-acre spread. During chores in his barn, Mount told me he could assess the PQ victory better “five years from now if I’m still alive.” He was angry with Bourassa, he says, and is no less comfortable with Pierre Trudeau in Ottawa—in part because of the battering he has taken for producing too much milk. Like many people in the Townships of his generation, however, Mount insists he has no choice but to hang in. “How can we move when we have this investment?”

Nearby Robert Mason, 37, continues finishing the interior of a new house he built near his father’s farm. Mason and his wife, Dorothy, 35, both unilingual, are scared. The weekend after the election they headed off with friends to scout land prices in Ontario. After some lean years, Mason reflects, “We are just getting it going here.” Adds Dorothy, mother of three young children, “What happens to them even after we’ve taken the trouble to make sure they’re bilingual?” An Anglo name, they feel, now means second-class status in Quebec.

At the regional high school in Cowansville some of the English students reflect their parents’ confusion about the future. Helen Collier, 15, a grade 10 student who lives in Knowlton, wants to become bilingual. “I like Quebec,” she says. “I like the environment. I like the challenge. If we separate, I’ll probably live in Quebec and see what happens. If something drastic happens, I’ll move out.”

But no one really knows what the future will bring, or what Lévesque’s commitment to an independent Quebec really means. The point was best illustrated when two French-Canadian women held their election post mortem in Waterloo. “Now we’re free,” the first enthused. “We won’t have to sing O Canada in English at the [Montreal] Forum anymore.” Her friend retorted, “If we separate, you won’t be singing O Canada, period.” 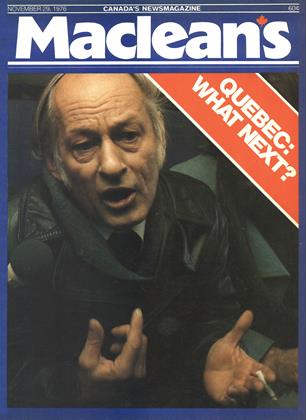