A woman for all seasons HARTLEY STEWARD December 13 1976

Sophia Loren may be the wealthiest film actress in the world. She lives, splendidly, in luxurious pieds-à-terre in Paris, New York and Rome; her possessions include Picassos and Rembrandts to look at, Balmains and Diors to wear. Her friends are the rich and famous of the world—actors, directors, politicians, presidents and kings. She has two young children, the mere mention of whom sets her face aglow, and she owns the kind of classical bone structure that keeps some women beautiful forever. And now, 42 years and an Oscar after Sophia Scicoloni was born into poverty and out of wedlock in Rome, there she was in the cold and snow of Old Montreal, slipping and sliding on the icy cobblestone streets, making her way from the set to her waiting Winnebago, shooting yet another movie. Her fiftieth. This time the movie is Angela, a $3.6 million update of Jocasta and Oedipus, the Greek classic about mother-son relationships, with John Vernon as the father and Sophia as Angela (Jocasta), a Montreal mother who unwittingly has a love affair with her longlost son (Steve Railsback). Scriptwriter Charles Israel, a Montrealer, calls it a tragedy and a love story, but mostly the latter. It’s Loren’s first North American movie in more than a decade and one of the growing number of international movies being made in Canada by largely Canadian crews.

Early on, a two-week delay in shooting allowed a visit from her two children— Carlo Jr., eight, and Eduardo, four—and Carlo Ponti himself. “The children,” says an animated Sophia, “they were the happiest children in town. They went trick-ortreating, we don’t do that in Europe. It was perfect.”

Every shooting day she was up at 6 a.m., at makeup by seven, on location by eight. By seven-thirty at night she had eaten in her room at Montreal’s Ritz-Carlton Hotel and was in her nightgown learning lines for the next day’s scenes. Not that there were no ripples: during her first week, La Loren called Zev Braun, the Los Angeles producer, in a rage. The hotel was charging her six dollars for an omelet delivered to her room. “Too much!” exploded Sophia, who knows the value of a dollar. Observed husband Ponti, in town at the time: “She is robbed of half a million dollars worth of jewels [New York, 1970] and she can take it in her stride. But six dollars for an omelet? That is a different matter.”

Although she once called Frank Sinatra “a mean little SOB,” and once slapped Marlon Brando’s face in return for a slap on her

backside, on the Angela set she displayed no star temperament. She rehearsed her lines with the intensity of a young starlet, complained not a whit about director Boris Sagal’s (Rich Man, Poor Man) painstaking reshooting, and bantered good-humoredly with her co-star John Huston and the crew.

Loren and Huston effortlessly exude the aura of the star personality—Huston no less than his exotic leading lady. He directed six of the best Humphrey Bogart movies (including The Maltese Falcon, The African Queen, and The Treasure OJ The Sierra Madre which won him two Oscars), and is now, at 70, playing the Montreal hoodlum responsible for kidnapping Angela’s baby—the kind of character part with which Huston has stolen many films made by other directors (among them The Cardinal, The Wind And The Lion, Chinatown). After directing 33 movies himself in 35 years, he says he’s having the time of his life acting. “It’s a lark,” he says, but it’s plain that he cares about it. Later he remarks: “So many actors today don’t give a damn about acting.”

On the set Huston entertains press, crew, visitors with Bogie and Katharine Hepburn stories. Sample: Hepburn hated Huston going off into the bush for hunting jaunts during the filming of The African Queen: brutal, she told him. “So I took

Katie out with me one day,” Huston says, lantern face breaking apart, “and she proved to be an excellent shot. She loved it.” He laughs easily, with the relish of a man who has enjoyed it all. As for Sophia: “She is a genuine pleasure,” and he gives the words such care and wonder as to make a listener believe Huston has produced fresh insight into the Loren mythology.

OnAngela’s tight shooting schedule (the film’s due to wind up around Christmas) she refused long interviews and declined to talk about her personal life except to say that stories in the European press of the collapse of her marriage of 19 years are “rubbish.” She once explained: “If I go to a nightclub with a friend while Carlo is out of town, I’m cheating. If I visit a relative in a gynecology clinic, I’m pregnant again. If I stay home to enjoy my family, I’m fighting to save my marriage. If I don’t feel like working and Carlo hires another actress, I suddenly read that I am crying myself to sleep because my husband is having a torrid affair behind my back. So I have stopped reading what they write about me.”

But stretched out on the cot in her Winnebago between scenes, complete with made-up black eye and bruise on her cheek planted by screen husband Vernon, she did find time to talk about the movie.

She is no longer the voluptuous, overripe woman who filled the screen in her earlier movies, but a slimmed down 135 pounds. At five feet eight-and-a-half inches it gives her a more delicate look than shows on the screen. She is no bone-thin Audrey Hepburn, but she is easily as elegant. “Fve been playing mothers for a long time,” she said in Italian-accented English, “and perhaps this is the most important mother of all. Of course, it is not an easy story, a love affair with one’s son. One has to approach it with delicacy and style. Not with force. In this story there can be no vulgarity.”

While Sophia put in her long days, driv -en to and fro from locations in a hired limousine—leaving Montreal’s fine French restaurants untested, but once dining in Ottawa with husband Carlo and the Italian ambassador as guests of the Trudeaus— Montrealers were not unaware of her presence. Somehow word of each day’s shooting locations leaked out and crowds gathered, trying to sneak a peek wherever they could. And every day Sophia’s local admirers sent flowers; thousands of letters were answered by the public relations staff. There were invitations by the score from Italian-Canadians, convinced Sophia yearned for a home-cooked meal of pasta. Charities requested her appearance, fashion boutiques wanted her to try out their designs. A fur manufacturer wanted her to pose in his furs, and a fake-fur designer, more obliquely, urged her to help the Save the Animals cause by being photographed in a fake-fur coat. Sophia turned them all down—even Mr. Antonio, who claims to be the strongest man in the world and wanted just one picture with his fellow countrywoman.

The fact is Canadians will have to get used to international stars in their midst. The Canadian tax setup for moviemaking allows investors a 100% write-off of costs for movies that are “certified” Canadian by the Department of the Secretary of State. It is an attractive tax shelter. Furthermore, last May the department stated that non-certified Canadian movies shot in Canada would have their cost write-off dropped from 60% to 30%, making it almost vital that producers do certified Canadian movies.

Zev Braun, Angela'?, producer, enthuses about the potential for moviemaking in Canada. “Canada could become an international centre for movie production,” he says. “Every producer, big and small, is looking at this country.” Braun’s enthusiasm, however welcome, is a familiar refrain to Canadian film people, who have heard the dawn-of-a-new-movie-age announced for Canada many times before. The optimism begins when the stars arrive and the magic of movies makes everything possible—only to die when the sets are dismantled and the cameras shut down. Alas, the stars always leave. Just as Sophia has just abandoned the icy streets of Old Montreal for the Christmas splendors of Paris. 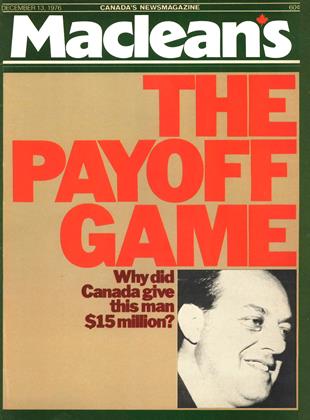