A referendum, even separation won’t answer the Canadian Question. They will merely focus it Claude Ryan December 27 1976

The victory of the Parti Québécois was neither an accident of history nor the erratic product of spontaneous growth. It marks the return to political power in Quebec of a school of thought that has always played a key role in our collective life and has now freed itself from old psychological constraints that led it to be highly critical of the functioning of Confederation. But never until the advent of the Parti Québécois did it seriously question the very foundations of our federal structure. The difference this time is that the new party in power in Quebec not only questions the federal structure but is resolved to replace it with a structure in which the first and ultimate locus of power will reside in Quebec.

Will the Parti Québécois succeed and by what means? Let it first be recalled that the Parti Québécois did not ask for and was not given a mandate to separate Quebec from the rest of the country. It derives power from the premise that its first responsibility will be to provide for Quebeckers honest, competent, efficient and humane government. Should the new government fail to fulfill this promise, their chances of success in the area of independence would be considerably reduced. But let’s suppose that the péquiste government succeeds in its first 18 months in office in delivering the goods on the rather modest pledges it made during the campaign. Then—and this is the most likely prognosis—we are headed for the gravest confrontation in Canada since 1867.

Two leading schools of thought have been at work in Quebec since the days before Confederation. To borrow the terms of the great historian, Arnold Toynbee, I would call them the Herodian school and the Zealotist school. The Herodian is oriented toward the broader world of the conqueror. He is resolved to remain himself and preserve his culture but thinks his culture and people will prosper better if they are in contact with the opportunities offered by the larger environment in which they are invited to integrate. This school has always emphasized liberty and individual success.

But while representatives of the liberally oriented school were acting as spokesmen for French Canadians on the national scene, another equally important school of thought was exerting a very important role in the formation of French-Canadian institutions and attitudes inside Quebec. As is the case with several péquiste leaders today, representatives of this school often had a better knowledge of international affairs and a greater interest in the affairs of

the world than many of their Herodian counterparts. But they have always been inclined to emphasize the collective aspect of the life and destiny of their people. They want the French Canadians to form a homogeneous society, to live within a framework of institutions fashioned after their own vision of the world, to be responsible for all important decisions affecting their future.

Only a few months ago, Pierre Trudeau pretended before the trilateral commission meeting in Ottawa that separatism was dead in Quebec. If he had studied the political and social history of his province

with as much understanding as he has studied the development of freedom in other parts of the world, he would have realized that the tradition the Parti Québécois embodies today has exercised more influence on the shaping of typically French-Canadian institutions and attitudes than the Herodian school of which Trudeau is leading spokesman. For a long time, the Zealotist school emphasized the nationalist aspirations of French Canadians at the expense of their social and economic interests. The great originality of the PQ lies in the dynamic synthesis it has effected between those two dimensions. Hence, the considerable penetration the PQ has made within the past five years in such sectors as the credit unions, the farmers organizations and the labor movement.

In the current crisis, we must hope, for the next few months at least, that the two levels of government will act with all the

restraint, dignity and democratic acceptance of reality that we expect from intelligent leaders. There are several areas in which cooperation is not only desirable but vitally urgent between Ottawa and Quebec. I am thinking in particular of measures to promote housing, to combat unemployment, to curb inflation.

But short of unforeseen difficulties, we must now expect that a referendum on the question of whether Quebec wants to become sovereign will take place within the five-year term the Parti Québécois has been given to govern the province.

For many the challenge will go beyond the mere question of whether Quebec should separate or not. I for one have not been really satisfied with the way our federal system has worked in the past 30 years. I am still less in favor of separating Quebec from the rest of Canada. I would feel embarrassed if I were forced to give a vote that would be a mere approval of the status quo or of separation. Before I am forced to choose between the two options, I will want to ask myself the broader question that a federal minister from Ontario put to me the other day: “Should we not rather ask ourselves in what kind of country we want to live in year 2000?”

The consensus upon which Canada has rested for a century has now been seriously shaken, if not fractured, in Quebec. I doubt that we can repair the damage overnight by a mere reminder of the limitations inherent in René Lévesque’s mandate. Economic and financial reasons may suggest that a referendum should be held as soon as possible in order to clear the air. But in the absence of genuine intellectual and political preparation, I doubt that a mere invitation to the people to answer yes or no to this or that question will do the trick. If a referendum were held soon on the simple question of whether Quebec should separate, we all know that the federalists would win. But that would not wipe out the problem. If by then we had not examined in depth all the implications of federalism and separatism, the problem would return after a short time.

Meanwhile, we should use the time at our disposal to reflect upon the conditions that are most likely to assure lasting peace and harmony in this half of the north American continent. With due respect to Trudeau and Lévesque, I doubt that this question can receive a satisfactory solution at a prematurely held referendum. A certain kind of maturation must first take place inside each one of us.

Claude Rvan is editor and publisher of Le Devoir. 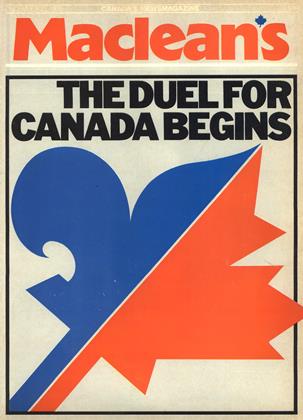