Michael J. Webb is a Calgary lawyer who also happens to be a vice-president of the Liberal Party of Canada. He was greatly impressed by a recent book by Dan Rather, the renowned American TV reporter. It is called The Palace Guard and is an examination of the Haldeman-Ehrlich-man group who sealed Richard Nixon off from reality in the White House. Webb has sent copies of the book to several party colleagues with a notation: “This is happening here.”

Webb, of course, is correct. The nervous regard of some people within the party as to what is happening in the tight little circle of the PMO is shared by the press. A cocoon of insulation wool has been erected around the Prime Minister of the land. The remarkable plunge in popularity of Trudeau and the Liberals since their smashing majority win in 1974 is due in large part to the new firm of merchandisers and packagers who now wall off the PM from the world. They are the people who have been raised to such esteem, naturally, because of their key roles in charting the 1974 victory: Senator Keith Davey and Jim Coutts.

Davey is the famed rainmaker, whose political career was “unblemished by success” until his shrewd orchestration of the 1974 Liberal campaign restored his shaggy head to chin-high position at Rideau Club lunches. A man of boundless enthusiasm for the causes he believes in, he is almost a caricature of his radio salesman background, with his garish Toronto pinstripe suits that often make him resemble a reject from the road-show company of Guys A nd Dolls. Davey has been greatly mocked by the press in the past but has developed a nice sardonic touch to defend himself. At a newspaper party he was introduced to a Globe and Mail editorial writer with the explanation that this was the fellow “who writes the short funny editorials.” Davey replied: “Actually the guy I want to meet is the one who does the long funny ones.”

It was Davey, with his merchandising background, who brought Coutts back to Ottawa as Trudeau’s principal secretary. Since arriving last year, Coutts has made one thing very apparent to both press and public: the much (legitimately) maligned Jack Austin, his predecessor in this crucial role, ran an open shop by comparison. Coutts is a packager and the package is becoming more confined. “People who would talk to you before,” notes a reporter, “don’t talk any more.”

Coutts is a cherubic little figure who rather resembles Mickey Rooney. He wears red suspenders and clothes that look

as if they’ve been around since the Thirties. He is from Nanton, Alberta, is a great mimic of public personalities at parties, still a bachelor at 37. But the little boy image is disarming: he has an MBA from Harvard and was a partner in a Toronto business consulting firm before being enticed back to do the biggest consulting job of all—the problem of packaging, marketing and merchandising Pierre Elliott Trudeau. The Coutts business consulting firm, for example, was given the job of being the search committee to find a new boss for Central Mortgage and Housing Corpora-

tion and turned up millionaire Ottawa builder Bill Teron for the job. Coutts has the right connections. He is one of the prestigious sponsors of the Lester B. Pearson College of the Pacific near Victoria (where Bill Teron’s daughter attends, where Jack Austin’s daughter attends).

What is most impressive about Coutts is how he has put the clamps on the PMO since arriving. It is symbolic to the Ottawa Press Gallery that the porte cochère that once led them off the parliamentary lawn to the East Block enclave of prime ministerial power has now been bricked up. So have the cabinet ministers. One gallery veteran says: “We have as much access to Trudeau, just chasing him down the corridors, as many ministers do now.” Coutts has eliminated a number of bodies who once had access to Trudeau. He controls the gate. He is the honest Bob Haldeman. A minor but

vital nuance is that the principal secretary to the Prime Minister of Canada does not live in Ottawa. He stays during the week at the Inn of the Provinces (owned by Teron) and retreats on weekends to Toronto. Ottawa is an assignment. He is a consultant— treating the newest corporate patient.

Indicative of the deteriorating PMO relationship with the rest of the world is the farce of the press secretary. The last one, Pierre O’Neil, left last fall for a deserved sabbatical in Africa and four months later no one could be found who wanted the job. It was obvious some of the animosities between Margaret Trudeau and some of the PMO staff on the celebrated Latin American tour could have been cooled with the presence of a senior press secretary attracting respect from both sides. O’Neil, the outstanding French-Canadian journalist in the Press Gallery when he was hired, grew increasingly frustrated at the lack of confidence shown in him. The second press officer in line, Courtney Tower, has indicated he too is leaving.

At the base of their troubles is Trudeau’s well-known contempt for the press. He grew up in the Quebec of Duplessis, when legislative reporters regularly accepted “gifts,” and he cannot seem to progress beyond that thinking. One of the reasons for Margaret’s hot-line outbursts after returning from Cuba is that she sat down and read what had been written about her in the press. Trudeau is famous for the fact he doesn’t read the papers. Can you doubt why he seems so remote from reality?

It’s hoped the genial new Press Gallery president Charles Lynch—who calls Trudeau “a physical fitness nut with a high IQ”—may be able to establish better relations, but the PM’S two senior gurus are manipulators. That is their training, that is their calling, that is their trade, that is their instinct. It was the Coutts-Davey strategy that was successful in the 1974 campaign: not to let the press talk to Trudeau. He made headlines as he read speeches, made announcements, sprinkled promises, but was shielded from press questioning. It was the reason why Robert Stanfield, who had his wage and price guidelines ripped to shreds by press scrutiny, was so bitter about the two standards.

Almost everyone in Canada these days finds it incredible to discover how out of touch with the electorate the Prime Minister is. But master manipulators have taken charge—perhaps without him even realizing it—of his political life. The palace guards think they stand on guard for thee. They are mistaken. 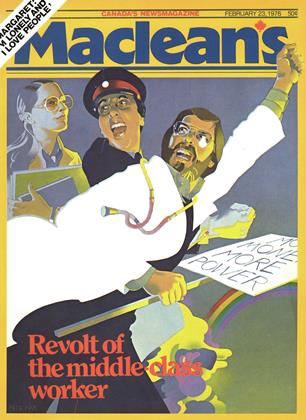