All the muck that’s fit to rake: the truth hurts more when it comes too late Harry Bruce February 9 1976

Click to View Article Pages
All the muck that’s fit to rake: the truth hurts more when it comes too late

The dirty rumors come true in the end. That’s the dangerous news. It’s that the loudmouthed smart face at the end of the bar was right all along. The tavern cynic who knows it all and knows it’s all bad, the blabbing hairdresser with her absurd spoutings about misbehavior in high places, the paranoid leftist editor with his fantastic charges about telephone taps, killers and crooks in the capital . . . those creeps actually turn out to have been right. That’s the political horror of our time but politicians go on talking as though the real problem is a malevolent press. Why don’t you lay off the muckraking for a while, eh fellows? It’s bad for democracy.

Politicians often demonstrate a willful refusal to understand the chief function of the press: to describe what’s happening. The more rotten the events, the more urgent the need to describe them right away. If years pass before someone lifts a tarp off a steamy heap of corruption, the stench revolts people far more than if they’d smelled it back at the beginning. Phew! So that’s what those slimy thugs, eavesdroppers, bribers, blackmailers, bootlickers and dollar-gluttons have been brewing ever since the election. Why didn’t somebody tell us? What happened at the Watergate apartments remember, was funnier than it was smelly; the stinking part was the cover-up. But what did our Prime Minister learn from it?

The national screech-in over his doubts about the free-market system obscured the fact that, during that notorious, year-end CTV interview, he revealed an opinion about the press that could easily have earned the delighted approval of a philosopher-king such as Spiro Agnew: “But, gosh, we’ve got to turn our minds to the positive things instead of being petty and instead of looking at the negative side of everything and trying to find a Watergate under every Member of Parliament and trying to get into I think what you call investigative reporting to make sure that nobody gets away with anything if we can suspect him of something.” Let’s forget such matters as Sky Shops and build a new ethic together, shall we?

But, gosh, Trudeau could scarcely be more wrong about what the country needs from its reporters. We need more, not less, of I-think-what-you-call-investigative-reporting. We need more, not less, careful, unvengeful exhuming of the negative side of our leaders. And we need less, far less, foolish emphasizing of the positive in whatever rising new hotshot of the hustings the media suddenly decide positively glows with charisma-in-our-time. What saps faith in politics is the discovery, too late, that the saints the press encouraged us to revere were less than divine, that Camelot was a cathouse.

Imagine it’s 1962. You’re on a train and the man beside you confides that, despite all the goody-goody stuff you’ve read about John Fitzgerald Kennedy, the President has secretly bedded down with Marilyn Monroe, a Mafia moll and God alone knows how many other women who used their bodies to achieve the height of, well, momentary social climbing in the White House. Suppose your seatmate then tells you JFK is not robust, he has a secret malfunctioning of the adrenal gland which has almost killed him three times. Moreover, the stranger continues, JFK was never a war hero. He was a lousy naval officer and throughout the war years he was having a torrid affair with a suspected Nazi spy. As a rule, he was neither selfless nor sunny. Toward friends and enemies, he was often petty, resentful, vengeful, pompous, even sadistic.

All of this, in ’62, would doubtless have struck you as nauseating bullcrap. You might well have changed seats. Who needed such kooks anyway? Next thing you knew, he’d be telling you Canadian cabinet ministers were intimate with a blond bimbo from Germany, or American agents were trying to assassinate foreign leaders. And yet now, in ’76, journalists, hookers and other chums of Kennedy are giving press conferences and writing whole books to prove the truth of everything that that mouthy screwball said about him 14 years ago.

The point is not that ill health, an undistinguished war record, a taste for revenge and a dash of lechery make a man unfit for leadership. Indeed, the JFK slurs may not even be entirely true. But the debunking of the glorious Kennedy mystique, which now threatens to become an industry comparable to theories about his assassination, would not have bred cynicism among the people if the mystique had been less than glorious in the first place. The Positive Thinking about Kennedy in the early Sixties amounted to idolatry not only in the States but here as well. “Bitter disillusionment with our leaders,” Senator William Fulbright writes in the current Columbia Journalism Review, “is the other side of the coin of worshipping them. If we did not expect our leaders to be demigods, we would not be nearly as shocked by their failures and transgressions.”

Is there any wonder why people grow apathetic and distrustful about politics at the top? We learn that Gerald Ford is a new Moses in one year and a stumblebum in the next. Robert Stanfield’s the unbeatable Bluenose in ’67, old fumblefingers in ’74, the wisest Tory in Christendom in ’75. John Diefenbaker’s a Messiah in ’57, a bungling egomaniac in ’62, a wonderful, noble, silvery old patriarch in ’76. In ’68, Pierre Trudeau’s the glowing prophet of a breathtaking new era; in ’76, in many opinions anyway, he’s a dangerous prattler who’s using his own government’s gross failure to cure the economy as an excuse to destroy freedom.

Fulbright laments the press’s habit of painting leaders as either saints or sinners. He’s half right. The press should certainly cease painting politicians as saints. Instead, it should regard every last one of them, no matter how attractive at the moment, as blackhearted sinners or potential sinners. Like all the rest of us. The press should Think Investigative and Think Negative. Skepticism is still a prime journalistic virtue. The more informative it is, the less it leaves for the rumormongers to chew. And the fewer the fallen idols. 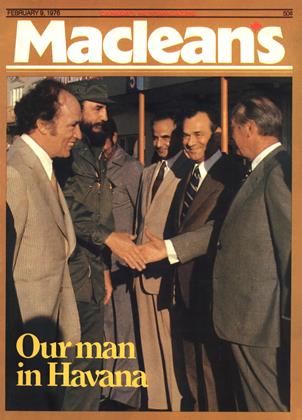