Prior service not an asset IAN URQUHART March 22 1976

“What we have here is a narrow question of law, as defined by the Supreme Court, that need not have any prejudicial effect on all the other matters that might come before the board.” With those words a proud Marshall Crowe, chairman of the N ational Energy Board, accepted the verdict of the Supreme Court that there was “reasonable apprehension or reasonable likelihood” he would be biased in hearing the case for a Mackenzie Valley natural gas pipeline. Crowe had to step down as chairman of the pipeline hearing, but he said he saw no reason why he should resign asNEB chairman because the court’s ruling was restricted to a single case.

The case against Crowe. 54, a professional civil servant who saw' the Mackenzie Valley hearing as the pinnacle of his career, was that in his previousjob (president of the government-owned Canada Development Corporation) he sat on the board of Canadian Arctic Gas Pipeline Ltd. (CAGPL). the company planning the immense pipeline (estimated cost: $7.5 billion). Two years after his appointment in 1973 tó the NEB, the same company came before him with an application to build the pipeline. Some of the self-styled public interest groups fighting the pipeline proposal, including the Committee for Justice and Liberty (CJL) foundation, a Torontobased religious organization, said this raised at least the apprehension of bias on Crowe’s part. Crowe disagreed and the matter was referred to the Federal Court of Appeal, which ruled in favor of Crowe last

December. But the CJL foundation took the issue to the Supreme Court, which overturned the Federal Court decision and ruled against Crowe in a landmark verdict (a split decision) on March 11.

The day after the verdict was announced the NEB met privately for about an hour to plan its next step. It could simply appoint a new man to replace Crowe and carry on where the hearings left off in early February, when they were adjourned pending the Supreme Court ruling. But the CJL foundation said it would take the NEB to court again if it did not agree to start fresh with a new panel. That would mean re-

hearing 36 days of testimony, a laborious task, and a delay that would also hurt CAGPL. which is hoping for a quick decision from the NEB. It fears the United States, which is considering natural gas deliveries from Alaska through a Mackenzie Valley pipeline, might get impatient and opt for a proposal from CAGPL’S competitor. El Paso Natural Gas Co. of Texas, which is planning to avoid sending Alaskan gas across Canadian soil by liquefying it and shipping it to the United States by tanker. The NEB. faced with a desire to avoid unnecessary delays on the one hand and possible court action on the other. scheduled another meeting to ponder the situation.

The Crowe decision will put the NEB and other regulatory agencies on notice that potential conflicts of interest cannot be ignored in structuring their panels. Crowe is just one of six NEB members who have backgrounds in the industry they are supposed to be regulating. The government argued before the Supreme Court that the expertise of people with backgrounds in an industry is needed on these panels. Through its lawyer, George Ainslie of the justice department, it also argued that lower standards of bias should apply to a regulatory agency than to a court. This argument was received with skepticism by Chief Justice Bora Laskin, whose written judgment will be handed down later.

John Olthuis, spokesman for the 1,100member CJL foundation, said after the Crowe verdict that his group is already looking elsewhere for similar cases to take on. A little-known group originally set up by members of the Christian Reformed Church, the CJL Foundation spent about $15,000 taking the Crowe case to the Supreme Court. Olthuis says he never questioned Crowe’s personal integrity and takes no satisfaction from his disqualification. “But the distinction between special interests and public interests must be maintained.” 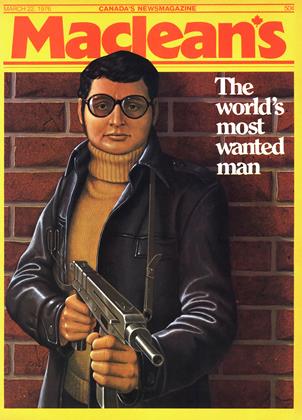