It was going to be a ringing warning to the Titans of international finance. The Lima press treated its daily communiqués and press releases with the sombre attention reserved for the end of an old order and the coming of a new one. But the second session of the United Nations Commission on Transnational Corporations never quite worked out that way. Weighted down with briefcases full of documents and wearied from florid speeches that often appeared intended for home audiences, delegates and observers from 40 countries went home after 12 days in Lima’s sticky summer heat with little more than a promise to really get down to business next time. The work at hand had been relatively simple. The 48-member commission, formed by the UN Economic and Social Council in 1974, intended at its second meeting to establish the ground rules by which the power of the huge multinationals could be discussed, and someday limited. But the hours of discussions and urgent meetings—many of them behind closed doors—kept delegates bouncing from point to obscure counterpoint in classic UN fashion. After one such session, the normally placid countenance of Barry Steers, Canada’s principal representative, turned grim: “We’ve just spent two hours discussing whether to add ‘the’ or ‘a’ in a clause.”

At the first meeting of the commission, held in March 1975 at UN headquarters in New York, delegates proposed the creation of measures giving nations some control over transnationals for the first time. Among them were a code of conduct and an information centre to provide regular input on the activities and scope of the multimillion-dollar conglomerates. The Centre on Transnational Corporations began work four months ago under the direction of Klaus A. Sahlgren of Finland, but the code of conduct is still at least two years away—and, if some informed sources are to be believed, as much as 10 years away. Central to this year’s conference was the role of the “Group of 77” developing nations (now expanded to 100) who had obviously the most to gain from a unified front against the international moneymen. In a 12-year period between 1955 and 1967, according to statistics released at the conference, multinationals took some $13 billion out of Latin America alone on an

initial investment of $3.6 billion. “We just can’t let this go on,” said Edward Valdez, leader of Peru’s delegation and the elected chairman of the session. “The transnationals have become super states and they threaten the decision-making powers of all countries, but especially the Third World.”

Peru, host to the conference, was particularly pleased to occupy centre stage. Its campaign of nationalization of large foreign-owned mining and resource companies since its 1968 military coup has made it a voice worth listening to. The country is also a partner in the Andean Common Market group, whose “Agreement 24,” controlling international investment, has been regarded as a model for the Third World. But Peru’s call for an international code that would be legally binding on the multinationals met with studied coolness from industrialized nations as well as from members of the developing bloc. India and Argentina, for example, are among a group of countries who relish the technology the multinationals can provide and are hesitant about alienating the companies completely. The delegates finally settled for a compromise solution that established a working intergovernmental group charged with drafting an outline for the Code of Conduct before next year’s session. The final approved proposal, regarded as an indication of the developing countries’ willingness to bargain, carefully left for future sessions the most divisive issues, such as the corruption and bribery disclosures of recent months and the definition of a transnational.

Industrialized nations maintained a soft profile at the conference, conscious of their susceptibility to charges that they were breeding grounds of international monopolies. One unhappy Japanese delegate

confided: “We would like to meet with the Group of 77, but they won’t let us. They don’t trust us.” The most surprising speech of the two-week meeting was the proposal by U.S. delegate Seymour Rubin, a law professor from American University in Washington, for an international agreement to limit corrupt practices. He demanded that payments, commissions and agents’ fees in international transactions be made public, and called for equal punishment for those who accepted as well as offered bribes. “The United States is second to no country in its efforts to reveal and eliminate corrupt international practices,” he said. The U.S. initiative managed to steal some of the thunder from delegates who had spent long hours on the floors of Lima’s cavernous Civic Centre conference room, denouncing in general terms the multinationals’ exploitation of their countries. “It was brilliant,” said Nigerian delegate Ejoh Abuah. “And it left a lot of people wondering what to say next.”

Canada’s three-man delegation, headed by Barry Steers, Ambassador to Brazil, found its natural allies in the industrialized countries, although it portrayed itself as a country that had been at the same time a victim of multinational corporations and a base for them. “We want to make sure things are done responsibly,” said Steers, “otherwise they’ll never get done at all.” But the rounds of meetings and debate, while they had their ironies—the nearby Sheraton Hotel, where many of the delegates stayed, was a multinational itself, built, as one delegate pointed out, with Canadian money—had at least one thing to commend them. “The challenge of this conference,” explained a UN press officer, “was not to be broken up on issues that people could walk out on. I think we met the challenge.” 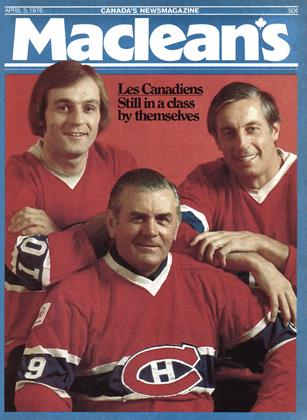