A government under the influence IAN URQUHART May 17 1976

“Patronage!” The one-word interjection, attributed only to “an honorable member,” jumps out of Hansard near the end of a wild exchange over the Sky Shops affair in the House of Commons late last month. During the bickering, which brought back memories of the bitter feuds between John Diefenbaker and Lester Pearson, Prime Minister Pierre Trudeau called the Conservatives “a bunch of hyenas” and Nova Scotia Conservative MP Pat Nowlan called the Liberals “horses asses.” But it was the word “patronage” that lingered after the insults subsided.

The Conservatives have taken up Trudeau’s challenge to prove that the Sky Shops affair, in which Liberal Senator Louis Giguère allegedly used his influence to swing a government contract for his friends, was more than an isolated incident. They are attempting to show that patronage is common under the Trudeau government. For several days after the Commons returned from its Easter recess, the Tories attacked the government with queries about Sky Shops and other questionable deals. The Tories even admitted hiring a private detective to help probe

into government wrongdoing. Such zealous pursuit of scandal goes beyond the normal bounds of politics in Ottawa. Opposition parties have traditionally been intimidated from exposing political patronage because they exercised the same power while in office.

All that has changed. The Tories, a safe distance (13 years and two leaders) from their last days in power and spurred on by their success with Sky Shops, seem determined to make an issue out of patronage. Leading the charge is Elmer MacKay, the Nova Scotia MP who brought the Sky Shops case to public attention last fall. The case, involving a government concession for a duty-free shop at Montreal’s Dorval airport, culminated last month with charges of conspiracy to defraud the government against Giguère and four other prominent Canadians, including NHL president Clarence Campbell. MacKay, a selfeffacing Maritimer, used Sky Shops as a jumping-off point for investigating government contracts at Montreal’s new airport, Mirabel. Why, he asked the government, had Gerry Stoner, formerly deputy minister of transport under Jean March-

and, intervened in bidding for the food concession at Mirabel to suggest CARA Operations Ltd., the leading contender, merge with Kebec Restaurants Ltd., with which Senator Giguère. a friend of Marchand, was associated? Why was there only one bid to install the public address system at Mirabel? Why was one bidder for the contract to install the de-icing equipment for airplanes at Mirabel told less than 24 hours in advance that the government had changed its mind?

MacKay succeeded in winning an admission from Trudeau that government contracts and appointments are vetted with specified cabinet ministers, depending on the region.* But Trudeau added these ministers do not intervene in contracts that are put out to tender. MacKay’s point, however, was that in both the Sky Shops case and the CARA-Kebec case, ministers or their spokesmen had intervened in the normal tendering procedure. In the Sky Shops case, no tender was called for the duty-free shop concession at Dorval. contrary to normal practice. In the case of the food concession at Mirabel, tenders were called and the intervention came after bids were opened and CARA’S was shown to be clearly better than Kebec Restaurant’s. Stoner then called CARA president Boyd Matchett with the merger plan.

The only good news the Liberals received during the siege was that Giguère had been hit with more charges, this time for alleged theft and breach of trust involving $16,536.95 collected from various corporations in his role as a fund raiser for the Liberal Party. The charges made the Liberals, for whom the money was destined before it was allegedly stolen, look like victims rather than villains, as Solicitor General Warren Allmand was quick to point out. And as the first week of May drew to a close, it appeared the questions about patronage from the Tories were petering out. “But I’m not backing off,” warned MacKay. “I’m just taking a breathing spell.”

Calling on sources both inside the gov-

emment and the RCMP, MacKay and the Conservative research office are now working on “Sky Shops Two,” the awarding of the duty-free concession at Mirabel. The concession went to the same firm, Sky Shops, as at Dorval, but it was under new ownership by then and Giguère was not involved as a shareholder. Sky Shops got the concession in competition with eight other firms under normal tendering procedures. But there are indications the procedures were not entirely free from political interference. At least one of the losing firms lobbied heavily for the concession with top Liberals, including Senator Maurice Riel, another Liberal bagman in Quebec; Claude Morin, then executive assistant to Health Minister Marc Lalonde; and Lucie Dion, then executive assistant to Jean Marchand.

Also under scrutiny are the many government contracts awarded to lawyers, advertising agencies, engineers, architects and other professionals. These contracts are awarded without tender and, according to Trudeau, political interference is the

norm. Indeed, the justice department has a list of lawyers acceptable to the government, and not surprisingly many of the people on the list are Liberals. Thus, when the government decided to prosecute the Irving newspapers in New Brunswick for allegedly forming a monopoly, William Hoyt, a defeated Liberal candidate in the 1970 provincial election, got the call. That appointment has been worth $115,526 in legal fees for Hoyt.

Perrin Beatty, the 25-year-old Tory MP. did some checking in the southwestern Ontario area and found that almost all the prosecutors of drug offenses appointed by the federal government were also Liberals. Says Beatty: “I know patronage has been an element of every government since Confederation. But that’s no excuse for it.”

Government spokesmen acknowledge that many professional contracts go to Liberals, but they say competence is still the first criterion in appointing anyone to a job. Says Trudeau: “It often happens that the best lawyers are Liberals.”

It is difficult to estimate how wide-

spread this type of patronage is, but reliable estimates place the total value of contracted-out legal services alone at close to three million dollars, with another $6.5 million for legal work on CMHC mortgages. The government will also place more than $20 million worth of advertising in various media this year, with the standard 15% fee going to the advertising agencies, almost allof them Liberal. MacLaren Advertising Ltd. of Toronto is a favorite firm of the government. Its chairman, George Sinclair, was one of the architects of the Liberal advertising campaign in the 1974 general election.

Defenders of the system say that government is a lot cleaner than it was in the days when John A. Macdonald telegraphed John Abbott of the Canadian Pacific railway: “I must have another $10,000.” With so much government work now going out to tender, supporters say there is little room for patronage. The exceptional areas, such as law and advertising, are not suitable for tender because it would be ridiculous to award such contracts to the lowest bidder. If responsibility for awarding the contracts was given to the civil service, they argue, it would result in work being given to friends of civil servants rather than friends of politicians.

Responds MacKay: “I realize you’re always going to have some patronage. The biggest mistake you can make is to strive after some sort of Utopia. But I see government like farming. Sometimes, you have to plough over the field and start again with a new crop. So, in politics, sometimes you need a change, just to preserve the appearance of fairness.” IAN URQUHART 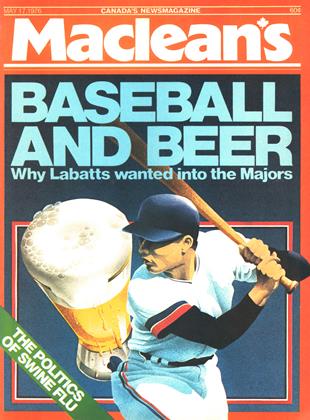