Judgment at Yellowknife: End of Part I NANCY COOPER May 3 1976

The contrast was unnerving. Inside, in the muted plushness of the Yellowknife hearing room, oil experts were telling the judge about the great career opportunities for natives if a natural gas pipeline is built down the Mackenzie Valley. Outside, ambulances screamed their way to a pink government-issue bungalow a mile or so away where an 84-year-old Indian, his two grandchildren and a young native girl lay dying of gunshot wounds. A young white man from Ontario was subsequently charged with their murders. A few days later, before going to bury his slain parishioners, Father Rene' Fumoleau told the judge: “They were not shot by a killer. They were victims of the so-called development that took place in the last 30 or 40 years which created miserable and unjust conditions for the poor people of this district.”

The judge, Thomas Rodney Berger of the BC Supreme Court, has become accustomed to such dramatic contrasts in his job as a one-man commission of the most ambitious public inquiry ever conducted in Canada. For 14 months and 30,000 pages of transcripts, the man everyone in the

North knows simply as The Judge has heard testimony on the impact of a 2,600mile pipeline to take natural gas from the Mackenzie Valley Delta down the valley to markets in southern Canada and the United States. He has used freighter canoes, float planes and helicopters to conduct hearings in 28 Arctic settlements. He has listened to hours of testimony in English, French, Slavey, Dogrib, Chipewyan, Hare, Loucheux and Inuktitut. His mandate has been to examine how the pipeline will affect Northern society, from the feeding grounds of the caribou to the impact on residents of the North—the 17,000 Indians and Metis, the 3,000 western Arctic Inuit and the 9,000 whites scattered along the proposed pipeline route. Two consortia, Canadian Arctic Gas Pipeline Ltd. and Foothills Pipe Lines Ltd., are competing for the right to build the pipeline, which, if approved, will be the largest single engineering project ever undertaken by private enterprise. Cost estimates vary. Arctic Gas says it will cost eight billion dollars for a line to carry U.S. and Canadian gas. Foot-

hills says it can do a Canadian-only version for $4.5-billion. The testimony of experts elicited over the past months has raised serious questions about the pipeline construction from an engineering, as well as a sociological viewpoint. Conflicting testimony has left unresolved the possibility that in sensitive permafrost zones the pipeline may buckle and damage the environment. Both applicants want to bring 6,000 workmen with machines and material into the area to lay the pipeline in three winters. There is some concern that construction companies might bowl over the delicate environment in an effort to meet completion deadlines. And some technical experts have questioned the safety of the proposed size and composition of the pipeline.

Overshadowing the army of technocrats is the complex question of native land claims, an issue entangled in the conflicting perspectives of Ottawa bureaucrats and native politicians. Simply put, the natives of the North want their land claims settled before any decision on the pipeline is made. To them, land claims are central not only to the great pipeline debate but also to the question of how Canadian justice is meted out to native minorities. Six years ago, when rumors of the proposed pipeline began circulating in the North, activist natives formed the Indian Brotherhood of the Northwest Territories to argue the natives’ claim to the 450,000 square miles in the Mackenzie Valley. In two weeks of testimony in April before the Berger commission, they slowly laid out an indictment of past treatment of the North by whites and presented a blueprint for an Indian-controlled future which they are trying to prove is both constitutionally possible and culturally crucial to their survival. At the centre of their argument is the Dene (pronounced Denay) Declaration, a meandering proclamation of independence passed at an NWT native assembly last summer. Basically the declaration asserts that treaties never took away the right of the natives to govern themselves and that the land claims are more than an appeal for territory but a claim for rights of self-determination. The document has generally been scoffed at in the northern white-owned press and has been totally rejected by Indian Affairs Minister Judd Buchanan as separatist and repulsive to Canadians.

The push for native land claims has been further confused by internal politics of the Brotherhood. Last year, when the NWT was given its first fully elected council after years of appointment by Ottawa, natives elected nine of the 15 representatives. But a viable native caucus was never formed, partly because of language problems and partly because of the frustrations of natives in trying to work within the white man’s system. Then last November, James Wahshee, the fiery president of the Brotherhood and an NWT councillor, was asked for his resignation. The reason given was a loss of confidence in his leadership due in part to his involvement with the territorial council. Wah-shee has been branded a radical for his support of the Dene Declaration but in the eyes of his staff he had been drawn too far into the white society. George Erasmus, a 27-year-old Cree who is contesting the leadership of the Brotherhood, put it this way: “We can’t make it using the white man’s ways. That’s what happened to James. He started off great and then ended up doing everything the white man’s way and we’re no good at that. There are Dene ways of governing ourselves and that’s our aim.”

At the centre of all this contention is the self-effacing Berger, who has charmed the northern people with his reserve and his respectful observance of all things native. Above all, he has listened to them. He will sit until 2 a.m. if people still want to talk. Then he will retire to his hotel room, his bunk-bed or his cabin to write memos and notes for the draft of his final report. During breaks in the hearings, Berger travels to Kingston or Calgary or Vancouver to spread the message of the North to a few more Canadians. He is quick to bristle over any suggestion that his inquiry is too long (more than a year) and too expensive (an estimated three million dollars). To one critic, he shot back: “If I’m going to conduct this inquiry, I am going to do it right. It takes time, but if Canada can’t take time to make an informed decision about what is going to happen to our northland, then what has Canada got time for?”

There is little doubt that Ottawa will have time for Berger’s report, expected by the end of the year or next spring. One Ottawa energy official said the high profile of the judge “will make it difficult for the government to ignore his report. He’s got the bit in his teeth and is enjoying the job.” What Berger is likely to recommend is still a matter of debate. Some private consultants who have followed the issue believe he will urge a settlement of native land claims before a go-ahead to build is given. But one government energy adviser discounts that view. “That would be a fairly bald thing to do. It’s the last thing the government wants, because Ottawa is sympathetic to the pipeline.” It is this feeling of single-mindedness on the part of the government that leads some to suggest the pipeline is a foregone conclusion. The problems of energy supply have a high profile in the public mind, and the recent cabinet decision to allow drilling in the Beaufort Sea is seen as evidence that the government is prepared to go ahead with energy exploitation of the North. Besides, Prime Minister Pierre Trudeau himself is on record as being in favor of early construction of the pipeline.

All this pre-guessing of his recommendations doesn’t seem to faze Mr. Justice Berger as he prepares to take his inquiry on a cross-country series of hearings in southern Canada in early May. “The government of Canada has said it has no commitment to build this pipeline,” he says stoically. “That is the assumption on which I am proceeding.” NANCY COOPER 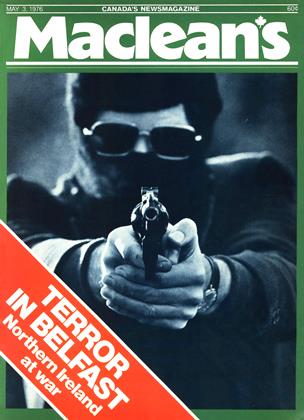