“We must be doing something right,” says Henry Gibson, the sequined, power-mad country star in Nashville, “to last 200 years”—clearly director Robert Altman’s cheerfully mocking salute to the energetic vulgarity of American patriotic hype. In Buffalo Bill And The Indians, Altman’s new film, Burt Lancaster as a character called The Legend Maker says by way of a parting shot to Buffalo Bill: “Inventing you was the thrill of my life.”

Altman understands how flag-waving rhetoric and showbiz dazzle are connected to each other. Nashville, which Altman described as his metaphor for America, was at once an exposé and a celebration of the huckster’s art of drawing crowds to the great gaudy freak show that is contemporary America. Now to mark his country’s Bicentennial, Altman has shifted perspective to give us a different kind of satiric epic on the lies and illusions that American culture lives by. Buffalo Bill And The Indians, which opens at movie theatres all over North America just in time for the July 4 festivities, goes back to find out how the media-stoned carnival of a nation depicted in Nashville got to be that way. The film finds the roots of it in the famous Wild West Show of the late 19th century where the self-serving distortions of strutting frontiersmen and lying politicians are instantly transformed into tawdry entertainment lore for an ever-gullible public. The film is the latest chapter in the extraordinary history of America which Altman has been putting on film as an imaginative corrective to the familiar official version.

The Wild West Show is a great subject for an Altman movie, especially since—according to Hollywood lore—an Altman production is itself likely to turn into something of a movable circus. With his penchant for improvisation and “winging it”—trusting to the creative inspiration of the moment—Altman has broken away from the mechanical rules of conventional movie-making. The people he draws to his projects are primed for a trip, and they usually get it—which is why established stars eagerly sign on to work for Altman at $1,000 a week. His films have something like the quality of an ensemble company’s work, because a corps of technicians and actors stick with him. His talent has created an underground Altman empire, and to keep all his people busy he has started producing other movies besides the ones he writes and directs himself. Next year he will begin shooting his version of E. L. Doctorow’s celebrated novel Ragtime, which he plans to make simultaneously as

a movie and a television serial.

Before his startling emergence as the most lionized of all American moviemakers of the Seventies, Altman’s eccentric habits had kept him on the fringes of the industry for two decades. A big man with the trace of a drawl and a goatee that has turned partly white, he was born in 1922, eldest in a middle-class Kansas City family. After dropping out of college and flying a bomber in the South Pacific during World War II, Altman was drawn to Los Angeles, where he flopped as an aspiring writer of radio scripts and film treatments. In the east he got into industrial films in 1948, found his way briefly into B moviemaking (The James Dean Story), then served an apprenticeship in television which was highlighted by the president of ABC being fired for allowing Altman to get away with shows considered excessively violent.

In 1966 Altman was fed up and quit television to develop movie projects. After a couple of flops, including the excruciating That Cold Day In The Park, made in Vancouver with Sandy Dennis, the turning point came when Altman agreed to direct an atrocious script about military doctors. He junked just about everything in the script and came up with M*A *S*H —the de-

finitive war comedy of the age and also, not incidentally, one of the biggest (and most unexpected) moneymakers in the history of 20th Century-Fox. Studio executives privately thought of M*A *S*H as trash for the drive-ins and Altman as a troublemaking eccentric, but the box office figures turned their heads. Although Altman has never repeated that commercial bonanza, it gave him the hit he needed to get the backing for the movies he wanted to make.

In the six years since M*A*S*H, Altman has been one of the world’s most prolific directors, and his reputation has kept growing. In Hollywood business circles Altman is still curiously regarded as an unpredictable maverick who had one fluky hit, but to cinéastes everywhere he is nothing less than a one-man New Wave who has changed the way movies are made and seen. Though he was once fired for letting actors speak at the same time, the overlapping dialogue in M*A*S*H was recognized as the crux of its comic originality. In McCabe And Mrs. Miller (one of three movies Altman has made in Canada), Altman used his throwaway, spontaneous techniques to take a fresh look at the frontier myth, and he gave the audience a sense of discovering the material. With Warren Beatty as the proprietor of a pioneer

whorehouse in the wilderness who knows he’s got poetry in him, McCabe was perhaps Altman’s finest, most delicate film—a bittersweet comic elegy for all the elusive romantic American dreams that never could have been.

Taken as a whole, Altman’s movies add up to a revisionist vision of the entire range of American experience. The comic anarchy of M*A *s*H demolished the official explanations for military operations and revealed the insanity behind them. McCabe stripped away the clichés of Hollywood westerns and put in their place a fresh, achingly beautiful interpretation of the frontier myth. The Long Good-bye, with Elliott Gould’s Philip Marlowe as the only straight man at a funky Seventies West Coast party where everyone else was stoned, finished off the convention of the hardboiled, incorruptible private eye. And California Split pulled the audience inside the mania of compulsive gamblers and made us understand that part of our psyche that itches to be on a Las Vegas spree in search of constant highs.

Altman works in open-ended, oddly indirect ways. “When I start a picture,” he says, “I know what 1 want in terms of feeling. I know how big I want the canvas to be. I start with the basic sketch; then I go for the details while I’m shooting.” The original script may have very little to do with the movie that eventually emerges. McCabe And Mrs. Miller was brought to him as a routine western vehicle. “It was so cliché-ridden, I said ‘Perfect, I’ll do it.’ I was telling the audience: ‘These are things you’ve seen a hundred times before. Now here’s how it really was.’ ” Altman has thrown out plot lines and other dramatic conventions to achieve a loose, rough texture. The action and dialogue never seem contrived, and the audience gets a sense of catching crucial details out of garbled conversation. We pick up things almost by chance as they’re being thrown away—the way we’re used to perceiving things in life but not at the movies. Yet there’s nothing accidental about that casual style; it’s much harder to achieve than the standard stuff where actors stare directly into the camera and read rehearsed lines in clear voices.

Buffalo Bill And The Indians, shot near Calgary with many Canadians in the cast and crew, is ironically the saga of an American hero filmed in Canada. (It is loosely based on Arthur Kopit’s play Indians, but so little of the original remains that it’s more accurate to say the movie was suggested by the play.) Altman is drawn to floating carnivals and the eccentrics who flock to them to act out their nutty fantasies. This endearingly tacky Wild West sideshow of 1885 acts as a magnet for dreamers and schemers who at other times and in other places might have struck out for the fanciful frontier of McCabe And Mrs. Miller or checked the action at the Las Vegas of California Split or hitchhiked to the Music City of Nashville.

In Buffalo Bill Altman explicitly works out something that was implicit in Nashville—his view of the political history of the United States as a con job operating on the same disreputable impulses as the entertainment industry. Politics and show business are both manufactured out of artful deception based on illusion, distortion and rhetorical flourish. Buffalo Bill examines the phony legend and how it was created, and Altman’s imagination fills in a comic milieu of manipulators and hangers-on who concoct a preposterously fraudulent legend for Bill Cody so that they can sell more tickets. “That’s my star,” beams Joel Grey, playing the producer in a

way that makes you understand that a couple of generations later the same man would have been cranking out bad westerns in the B movie world of Hearts Of The West. “He belongs to all of us,” his publicist objects. The producer resolves the conflict by inventing a grander fantasy: “Our star—A merica ’s star.”

But America’s star, played by another walking legend, Paul Newman (who ought to know about such things), has trouble living up to his myth. Surrounded by hustlers who blow trumpets, wave flags and cheat Indians to embroider their man’s exploits, Buffalo Bill Cody is actually a puffed-up boy scout with a weakness for comely col-

oraturas and an inability to track down Indians even with a well-marked map and a horde of flunkies. The difference between Altman and other debunkers is that there’s no bitterness in his exposés; he clearly loves the tackiness and fraudulence of the showmanship he gleefully satirizes, in the way Fellini loves the hopelessly backwoods amateur troupers of his early masterpieces.

Altman movie one has hoped for. Watching it you feel you’re in the presence of a great original talent groping for something that doesn’t quite come off. Part of the problem is right at the centre in Paul Newman’s performance; bizarrely, Newman seems singularly unstarlike in this portrait of America’s archetypal star, maybe because he was conscious of Altman’s debunking intentions. The didactic Brechtian technique gets in the way of Altman’s sly, oblique style, and it throws the movie out of whack. Yet there are many wonderful things—Will Sampson's performance as Sitting Bull’s intransigent interpreter; a nightwalk monologue by Buffalo Bill which recalls the description of Nixon in The Final Days; a delicately funny sequence about a visit from the President of the United States, Grover Cleveland, portrayed with delicious bluster by Pat McCormick.

One of the dangers of Altman’s way of working is that there’s no way of telling when his magic is going to fail him, but that’s a risk he must be free to take. We don’t want Robert Altman to become, like Buffalo Bill, a victim of his own legend— but given the pressures of last year’s media buildup for Nashville and his six-milliondollar budget this time, that’s a real threat. Flawed and uneven though it is, Buffalo Bill And The Indians is still the most interesting movie of the current season. This is Altman’s own personal Bicentennial cele-

bration, a welcome antidote to other July 4 fireworks. It reminds us why we go on loving America even when we know the worst—even when we’ve been told the awful truth. 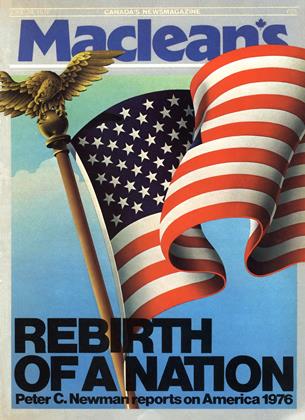