The Eaton’s clerk folded the bag, handed it to the customer the other side of the counter. “Well, what’ve you got for us this year, Jack?” she asked. “Oklahoma! and Brigadoon,” he replied crisply, “see you there.” “Oh, I’ll be there,” said the clerk, “I haven’t missed the Rainbow in eight years.” Jack Shapira, 49, elicits that kind of grass-roots zest only partly because he exudes it himself: as boss of Winnipeg’s 2,342-seat Rainbow Theatre he produces shows every July and August for the madding crowd and in the 10 years since he took it over ($96,000 in the hole) he has increased his production budget from $94,500 to this year’s $349,500, and annually attracts audiences of well over 90% capacity. They’re audiences impervious to reviews, to sudden summer storms roaring off the dome roof (solution: crank up the sound system)—above all, impervious to the Manitoba mosquitoes which have to be sprayed before every performance and often during intermission.

The Rainbow’s success is not entirely due to Shapira. In large part it’s due to a growing eagerness among Canadians to see something enjoyably untaxing during the summer holidays; a casual scan of any newspaper’s entertainment pages will prove that “enjoyable” and “un taxing” are not the first adjectives today’s movies bring to mind. Ten years ago it was different,

with a meagre handful of straw-hat theatres, erratic fly balls popped across the country, but mostly in Ontario. This summer Canadians can see productions— mostly comedies and the occasional musical—in every province, many of them for obvious reasons based in popular holiday areas.

Samples available: The Caravan Stage Co., out of Salmon Arm, BC (touring the interior in four hand-painted, Clydesdalepowered wagons and producing both adult and children’s shows, all original); Palisades Arts of Calgary (The Knack; The Two Of Us) at Jasper; Saskatchewan House, Regina (John Coulter’s The Trial Of Louis Riel); the Blyth, Ont., Summer Festival (Lister Sinclair’s The Blood Is Strong); the Huron County Playhouse at Grand Bend, Ont. (You’re A Good Man, Charlie Brown; Charley’s Aunt; Anne Of Green Gables; others); Festival Lennoxville, Que. (three comedies in repertory); a season of musical revues at the Neptune Theatre, Halifax; Newfoundland Summer Festival of the Arts at St. John’s (varied comedy and musical productions at the Arts and Culture Centre throughout the summer).

Of them all Shapira’s theatre is perhaps the most successful in terms of community support (a remarkable 50% of his budget is returned at the box office), and the least ad-

venturous in terms of product. In a few thousand pungent words he explains he has no intention of changing from the Rainbow’s well-tried formula of musical comedy—not just any musical comedy, mind, but family fare, even if it means cutting back on his grosses for kids’ ticket prices. “Last winter,” he says, “Walter Burgess [the Rainbow’s director] and I went to New York to see the new musicals. Nothing but four-letter words and homosexuality! Chorus Linel Forget it! You know the song in it about ‘tits and ass, that’s what you need in show business’?— true, of course, but it’s not for my Winnipeg audiences.”

Still, Shapira—an engaging self-made entrepreneur who says he’ll never be in need of a tag day—admits he is not as sure as he once was about exactly who his audience is. He likes to call the Rainbow “a ham-and-egg theatre for the lunch-pail crowd,” and a couple of years ago was saying just that to man-about-the-arts Arnold Edinborough, visiting from Toronto. At that moment, as they stood at the back of the theatre, a vision of beauty swept by them on the way to the audience clad mostly in perfume and a $10,000 mink. “Jack, are you putting me on?” asked Edinborough. It was one of the few times in his life that Shapira has been at a loss for words. SARAH YATES/DAVID COBB 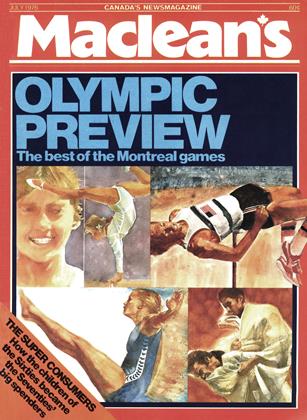