Harry Enns, 44-year-old rancher and Conservative member of the Manitoba Legislature, was so furious his syntax came unstuck. “I will not bow to attention,” he cried, “when Comrade Brezhnev asked me to do so! The painting has not been painted, the sculpture sculpted, or the poem written which is worth one of my rights!”

But alas for Enns, some of whose family were shot by the Russians before the survivors made it to Canada in 1926, the Manitoba Legislature thought otherwise, and after a month’s debate passed by a vote of 35-14 the legislation the Russians demanded before allowing the Winnipeg Art Gallery to host (August 13-September 26) one of the most impressive traveling art exhibits ever seen in North America. One of the Russian demands was simple enough: 24-hour armed security, understandable

precaution for a show valued at $34 million and made up of 42 paintings from Leningrad’s Hermitage and State Russian museums. Among them are works by Titian, Rubens, Caravaggio, Zurbarán, Rembrandt, Velázquez, Fragonard, Poussin, Gauguin, Matisse, Picasso; 14 were once the property of Catherine the Great and have never been seen outside Russia. But it was the second Russian demand— unforeseen last fall when James Jerome, Speaker of the House of Commons, asked the Russians if Canada might have the exhibit after a five-city Bicentennial tour of the United States—that ruffled Harry Enns, Manitoba’s Ukrainian Canadian Committee, the Anti-Bolshevik Block of

Nations, and the feathers of civil libertarians outside his province as well. The Soviets wanted a law that would exempt the paintings from seizure through Canadian courts. They feared civil suits from disaffected descendants of families who might once, before the Communist regime, have owned one or more of the paintings and now, heady with the ozone of Canadian freedom, might sue to have them returned. The libertarians feared that such a law would deny Canadians—as it undeniably will—a due process of law in their own courts.

Ontario decided to avoid a similar brouhaha. Although the exhibit was offered to the Art Gallery of Ontario, Premier William Davis, head of a minority government, saw to it that the matter never came before the legislature at all. In a letter to Marvin Gelber, then the gallery president, Davis called the proposed legislation “abhorrent to anybody who values civil rights and civil liberties.” What a contrast to Quebec, where Robert Bourassa has a massive provincial majority and the legislation was rushed through in four hours. The exhibition is tentatively scheduled at the Montreal Museum of Fine Arts for a three-week run from mid-October.

The price tags for Winnipeg and Montreal won’t be cheap. The Winnipeg Art Gallery estimates a basic cost of $90,000, or more than its regular exhibition budget for the whole year. Security may cost another $20,000 on top of that. Skeptics outside the province regard the $110,000 total as low: total cost to the Detroit Institute of Arts, where the show played for five weeks last winter, was $170,000, including security. However, Detroit made a profit of $47,000: the Winnipeg Art Gallery, strenuously hoping for 70,000 visitors at $2.50 a head, would like to do at least as well. Only time will tell, although the art on view in Winnipeg, Harry Enns notwithstanding, is timeless.

Not last year—and so far not this year, either.”

It sounds like the worst kind of news for Canadian artists. In the past 10 years Toronto has become beyond question their major commercial showcase: Montreal, Vancouver, even the color-painters of the Prairies may all claim (mootly) that their milieu is more deeply exciting, but it is still Toronto where the major selling of their wares goes on. According to the Toronto Star, $15 million was spent on art in Toronto the previous year (1974-75), making it second only to New York as a North American art centre. The reasons for that kind of importance are clear: high quality of work shown, and ready cash—lots of it—on the line.

The quality of work is still there. So is the money. But now the cash is going into Guccis, Puccis and Mercedes—“showand-tell money,” as one dealer put it, spent on items whose cash value is readily apparent, as much of art’s is not. As a consequence, it is not a good time in Toronto to be an artist whose work has reached the $5,000-plus range. It's not a terrific time, either, to be a young artist, or one without an established name. Most deadening of all, these are doldrums for new ideas or aesthetic adventure of any kind.

Where to lay the blame? Pierre Trudeau’s broadcast musings on the future of the free-market system and the activities of Ottawa’s Anti-Inflation Board have both had their cooling effect on art investors among the city’s businessmen. “The notion pervaded most corporate minds,” says an art consultant to business and industry, “that anything that can wait, can wait.” Still: “I don’t know that Ottawa is the only culprit,” says Alkis Klonaridis of Toronto’s David Mirvish Gallery. “We could say it was just the government at fault if people elsewhere were doing much better than we were, but that’s not the case. The English and U.S. art markets also suffered a reaction to the general recession.”

In a peculiarly Canadian way, some of our public institutions are to blame—by their very generosity. The Canada Council, through purchases for its Art Bank, has vastly increased the flow of public funds already entering the market from public museums, so that some dealers now find themselves spending most of their time servicing such institutional clients rather than cultivating the individual collector without whom any art market must perish. But even dealers, with sufficient staff to service all levels of clientele, report widespread lack of élan among private collectors, and they have no doubt about whom most to blame: The Media. “Amateur Night” and “incredible and inadequate” are perhaps the two kindest dealer-assessments of art coverage in Toronto. Jared Sable of the Sable-Castelli Gallery sums up: “There’s no romance left in contemporary art for the Toronto public: the quality of work is better than it was 10 years ago, but the sizzle is gone.” BARRIE HALE 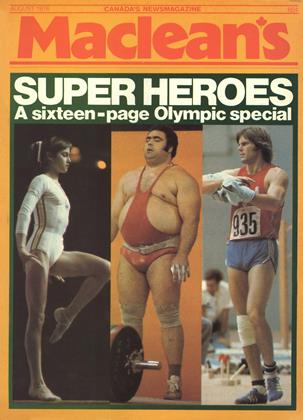