What will a referendum mean? Nothing conclusive, constructive or even new Peter Desbarats October 3 1977

The idea of holding an independence referendum in Quebec was a brilliant electoral tactic. It enabled Quebec voters, on November 15,1976, to choose the most appropriate successor to a corrupt and demoralized government. In this sense, the referendum proposal already has served both the Parti Québécois and the province well. It is time to have the courage to scrap it.

I don’t for a moment believe that René Lévesque will do this, but making the suggestion helps to throw light on why the referendum is being staged and what we can expect from it.

Having served its immediate purpose in the last Quebec election, the referendum project has outlived its usefulness as a constructive political tool. Everyone already knows what the outcome of the referendum will be: inconclusive. Continuing to work toward it now is distracting Canadians, French and English alike, from the real problems that face us.

One of the most destructive aspects of the referendum, and the reason why many Canadians find it almost irresistible, is its counterfeit air of being conclusive. It pretends to be an honest and straightforward way of making a choice—Yes or No. It panders to the eternal Canadian yearning for an ultimate solution to our most vexing internal problem and it reinforces the illusion that there is an easy answer.

The early separatists had the same kind of blind faith in simple solutions. In the Sixties, arguing with separatists in Quebec, I always used to feel devious and vaguely corrupt. Their criticism of Canada was so logical; their solution so surgically clean. Their thesis was that French and English in Canada are in an “unnatural” state of union. They proposed a higher and more logical form of existence for Frenchspeaking Quebeckers—or so it seemed to them—and said that it could be realized primarily by an almost religious act of the will, although even they rarely imagined that it could be as simple a political action as marking an X on a referendum ballot.

This early separatist onslaught was so intensely idealistic that it took time to appreciate how Canadian it was—for of course these brilliant, theatrical and, at times, dangerous exponents of separatism came right out of the Canadian experience. They were among the best examples of the creativity and energy generated by the historic tensions between French and English. Slowly I began to appreciate that this tension or antagonism is what makes us tick. The political creation that is Canada may

seem “unnatural” by some criteria but the conflict and competition within it have become our natural environment, unique to us. It is not the presence of French Canadians within Canada that makes us unlike Americans but our mutual, prickly awareness of one another.

When my sister last year visited Canada after living for five years in Australia, she said that Canadians seemed to be more lively and adventurous than Australians. Some people suggested that it was a matter of climate, but I believe that the highly charged atmosphere between French and English in Canada galvanizes us. Perhaps the history that we’ve all been taught hasn’t enabled us to see our own reality of tough-minded competition between English and French.

One of the assumptions shared by everyone in this country is that English-speaking Canadians have the attitudes of a majority group while French Canadians are conscious of being a minority. The position of a minority is admittedly difficult but there are compensations. When French Canadians found themselves stranded in North America, a dwindling minority, they were forced to fall back on their own resources. The result was a unified society bonded together by shared difficulties and ambitions, not to mention a continued sense of progress.

English-speaking Canadians have now experienced just enough of this minority role, in relation to the United States, to appreciate its positive aspects. Living beside

the United States has both inhibited and challenged us. In the Seventies, there are few Canadians who would trade geographical locations with such prosperous and isolated white remnants of the British Empire as Australia and New Zealand, South Africa or Rhodesia. After years of railing against its dependence on the United States, Canada discovered that achieving independence is like arriving at maturity—you wait an endless time for it to happen and, suddenly, it’s there. You can’t wish it into existence by making a mark on a ballot.

I believe that the same thing is happening in Quebec. In their own province, French Canadians now have achieved political maturity almost without realizing how recent a development it is. The only remaining task, in the same scale, is to settle the question of economic competition between English and French in Montreal, the commercial metropolis of the last century where new and old elites are struggling for power in a shrinking world.

What has the referendum to do with all this?

In an era of public opinion polls, its results are a foregone conclusion. Far from revealing public opinion, it prevents its orderly development. It becomes a political weapon, an interruption and distortion of our political process and, at worst, an entertainment. The referendum is the Parti Québécois’ equivalent of Mayor Jean Drapeau’s 1976 Olympic Games. In theory, even at this late date, the Quebec government could cancel the referendum. Most Quebeckers would accept the reasoning that the Parti Québécois was elected not so much on a promise to hold a referendum as on a commitment not to declare independence without going first to the people.

There will be the usual opportunity for that in three or four years, and no shortage of concrete problems in the meantime on which the Lévesque government can demonstrate its competence. The next Quebec election would then give voters a chance to assess a specific independence option embodied in a political party and platform, not an abstract theory that still causes rifts and confusion within the Parti Québécois itself.

Perhaps the greatest contribution that René Lévesque could make to the continued development and independence of Quebec would be to have the courage to say “No” to the referendum.

Peter Desbarats is Ottawa bureau chief for Global Television and author of René, a biography of René Lévesque. 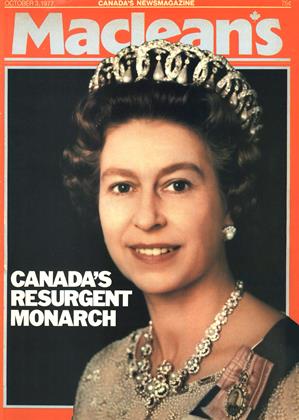