There is always a spot to be found in TV schedules for opera, provided it’s soap opera or a Grand Ole Opry-style opera. But for the traditional variety, much less contemporary operas such as Raymond Pannell’s Aberfan (CBC-TV, October 26), there are more reasons for stopping the project than for encouraging it, from the vulgar requirements of a mass-audience medium to the Stone Age, monophonic reproduction of most TV sets. Given these obstacles and the screeching of the press, which vilified CBC producer-director John Thomson for reaching “a new low—a disaster opera,” before the work had even been finished, it’s amazing that Aberfan, based on the Welsh landslide tragedy, should have been made—and a relief to many that its creation should now be regarded as something of a triumph.

When A berfan was shown in Europe this August, it made history by winning the Salzburg Opera Prize over made-for-TV operas from nine countries, becoming the sole North American entry ever to win during 21 years of competition. Had it not been for this prize and the $8,600 purse that goes with it, Pannell might have been a prophet without air time in his own land.

Small wonder that the 42-year-old Pannell, best known for his opera The Luck Of

Ginger Coffey—which the Canadian Opera Company premiered during its 1967 season—should be so bearish on the role of television in popularizing “opera, the most neglected art form in North America.” A late convert (he recalls hating opera throughout his youth), Pannell and his librettist wife, Beverly, had TV in mind from the start when they decided to write an opera about the tragedy of Aberfan. That Welsh village has never recovered from the day in 1966 when the 700-foot high “tip” of coal slag piled atop a mountain roared down the slopes and engulfed the school at its foot, burying 192 children and teachers alive.

Aberfan is a surreal collage of Life magazine photos of the disaster, and the bitter, emotional memories of a child’s mother (soprano Mary Morrison) and father (baritone Gary Relyea). Like troops on the eve of a doomed assault, a chorus of ghostly children from the Toronto Boys’ Choir punctuate the narrative with their premonitions of^Üisaster.

The CBC is as impressed by Pannell’s efforts, it seems, as he is with the corporation’s medium, CBC-TV will celebrate its first Opera Month ever, during February 1978, by broadcasting one opera every Sunday afternoon. The French network’s production of Madama Butterfly is scheduled, as is a BBC production of Macbeth and a repeat of the telecast from Ottawa of The Magic Flute. And even though he won’t confirm it, there is another madefor-TV opera in the works from Raymond Pannell, the man to whom opera used to be just so much soap. KASPARS DZEGUZE 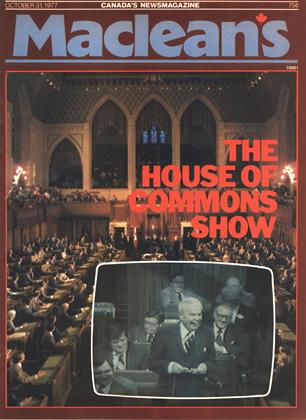