Ever since North Americans faced the fact that fuel reserves are finite, some drivers of big cars with huge V-8 engines have felt guilty. While they reveled in powerful six-seaters, environmentalists kept telling them their gas-guzzlers were sinful. But now, energy-conscious car lovers—especially if they happen to be big-car lovers— may be able to relax and enjoy: car manufacturers have rediscovered the diesel.

Everyone has heard the whine and smelled the exhaust of diesel trucks on the highway. But until now, cars with diesel engines have been rare because the expensive Peugeot and Mercedes-Benz diesels couldn’t produce the speed and quiet demanded by pre-energy crisis consumers. Three years ago fewer than 1,000 diesel cars were sold in Canada. This year the appearance of a new, light diesel should push sales to about 10,000. Introduced last spring by Volkswagen and in October by General Motors, the improved diesel offers all-round economy: better mileage, cheaper fuel and lower operating costs. It is up to 25% more fuel efficient than the gasoline engine, yet costs little. A diesel option on the Volkswagen Rabbit adds only $275 to its price, while a diesel option offered by General Motors on the Oldsmobile 88 and 98, as well as the Chevrolet and GMC light trucks, costs about $800. The new engine keeps the advantages of the heavy machinery diesel—no need for a tune-up and longer engine life—and reduces diesel complaints such as noise, slow acceleration and delayed cold weather starting. Because it has no spark plugs or distributor, tune-ups are unnecessary and an occasional setting of the fuel jets and regular oil changes should keep the engine running up to 150,000 miles.

But there are real problems. A diesel owner can’t just stop at the corner station

and get his tank filled. He must find a station with a diesel purrrp. However, there are so few diesel pumps in Canada that when Christopher and Eva Innes of Beeton, Ontario, bought a diesel Mercedes this year the dealer gave them a list of diesel stations across the country. Most are on truck routes and not easily accessible to a city driver who discovers he’s out of fuel at midnight. “We keep a five-gallon plastic can full of diesel fuel in the trunk just in case,” says Eva. The problem can’t be solved simply by adding another pump at each gas station. Canadian oil refinery officials say it would cost billions of dollars, increasing fuel costs to the consumer, to convert from the production of gasoline to diesel oil.

Ironically, a stimulus and at the same time a threat to the energy-saving diesel is American energy legislation. Renewed interest in the diesel was prompted in the first place by the Energy Policy and Conservation Act passed in 1975. It states that the automobile fleet of each company, which now averages 20 miles per gallon (U.S.), must average 27.5 miles per gallon by 1985, The obvious solution—sell compact cars—hasn’t been very popular because surveys show that American buyers still prefer six-passenger models. So General Motors came up with a light diesel. But now the diesel has come up against the U.S. Clean Air Act. It specifies that the level of oxides of nitrogen emission (an irritant to eyes and throat) must be reduced to one gram per mile by 1985. Frank Fleck, director of engineering for General Motors in Canada, says the best the diesel can do and still remain economical is 1.5 grams. The lobbies in Washington are working hard for a change in legislation.

Meanwhile, despite the uncertain future, diesels are selling. Volkswagen expects to find buyers for every one of the 7,500 diesel Rabbits in Canada. Kingsley Grant of Brockville, Ontario, says he went all the way to Ottawa in early July to buy his new yellow Rabbit. “I’ll be retiring soon,” he says, “and I wanted a car that would be easy on fuel and help conserve energy.” What he enjoys most about his diesel is filling up at the local truck stop where he gets the nine gallons that will take him more than 500 miles. “I always get a kick out of looking at the diesel pump to see what the last sale was. It’s usually 90 or 100 gallons.”

General Motors is still testing the market, waiting to see if the little irritants—the 10to 45-second starting delay, the slightly louder engine, the slower accelerationwill discourage people from buying its big diesels. Only 2,500 of them are on Canadian car lots this year. But GM’S Fleck is convinced that if the diesel catches on it could do more than save money and fuel : it could very well be the savior of the big car. “The diesel may be the only engine available on a full-size car by 1985,” he says. “Either it’s accepted or we’ll all be driving compacts.” 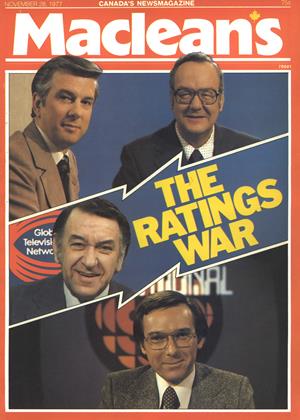