Like a corpse climbing out of its coffin, the pipeline issue is on the move again. Most of Ottawa thought it had been safely bundled away this summer, when the government confirmed the consensus of politicians and press and supported the Foothills group’s route down the Alaska Highway rather than the northern YukonMackenzie Valley proposal of the rival Canadian Arctic Gas consortium. But now there are hints from New York that the big U.S. financial institutions which will be expected to put up most of the money for the project are mutinous. They may insist that their investment be protected by some sort of government guarantee. Both Ottawa and Washington have already rejected that idea. But with Canada’s unemployment rate soaring above 8% this winter, and an election lurking in the wings, it is believed in New York that the Liberals will capitulate rather than see yet another policy go down to public humiliation.

The Foothills pipeline has problems enough already. A time-consuming tussle is underway as to the size of pipe to be used, with one option likely in effect to di-

rect contracts to U.S. steel mills which are better equipped to supply them. The required legislation has not yet passed through the House of Commons, and both opposition parties are happily planning exercises in competitive nationalism on the Canadian content issue which could delay its passage until well into 1978.

But finance promises to be the highest hurdle. At a cost of at least $ 10 billion, the pipeline will be the largest construction project ever undertaken (and the company that owns it will be, at one stroke, Canada’s biggest in total assets). The money will have to be borrowed from the largest U.S. pools of capital, mostly insurance companies. Even for them, it will represent an investment too substantial to take risks with, if they are to meet their obligations to their policy holders. Yet the Foothills risk is literally incalculable. The very lack of detailed planning, which enabled the project to avoid the fatal scrutiny the Mackenzie Valley proposal underwent, makes ulti-

mate costs impossible to estimate with confidence. It’s an unpleasant gamble for the institutional investors. Significantly, two of the most important, New York Life and Metropolitan Life, got cold feet at the last moment during the trans-Alaska financing, forcing its postponement. Other major lenders are said to be feeling the same way now. A reassuring word from a government would steady the ranks.

Bob Blair, the flamboyant president of Foothills and of Alberta Gas Trunk Line Co. Ltd., did not defeat the Eastern financial establishment and its U.S. allies without a lot of nerve. His team shares it. Robert Pierce, who is in charge of financing the Canadian section of the pipeline, says unhesitatingly' that the pipeline can be financed privately. “It’s easy to take a negative attitude. When we [Alberta Gas Trunk] started our petrochemical project in Alberta, everyone said we couldn’t do it. Every project in Canada of any size always has a chorus of people saying it can’t be done.” He is right. But Pierce also says “a number of things have to be done” before financial arrangements can be made. These things—setting gas prices, choosing pipe size, passing legislation—are so fundamental that in their absence his assertion that the pipeline can be financed privately is one of will rather than fact.

Some U.S. observers believe that Jimmy Carter’s determination not to guarantee the Foothills project, for obscure populist reasons, is absolute. They speculate that if the Canadian government is compelled to backstop the pipeline for the economic stimulation it will bring, the Mackenzie Valley route might be resurrected. It was not only cheaper, but brought direct benefits to Canada by offering access to the Mackenzie Delta reserves, exploration of which has been expiring since hopes of early extraction were dashed.

Canadian Arctic Gas openly said it would need government guarantees. Some of its bitter supporters claim that Foothills’ renunciation was just a temporary selling ploy. This assumes a high degree of naiveté on the part of ministers and officials. It is clear, however, that a company such as Blair’s Alberta Gas Trunk is a quintessential example of the political entrepreneurship that government regulation of business inevitably produces. Such a creature is likely to behave very differently from the engineers and financiers who designed the Mackenzie Valley line according to mere economic logic. It will be no great surprise if political logic produces a reversal of Blair’s no-guarantees position. 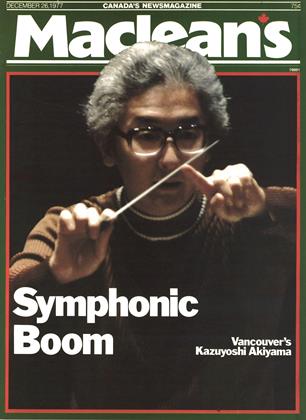