Is Ottawa out to get the media? Will it succeed? Does anyone care? JUDITH TIMSON February 21 1977

Federal investigators were nearly finished rifling his desk before veteran Vancouver Province reporter Tony Embers realized there might be a principle at stake. But by then, of course, it was too late. Besides, the two agents, working under the authority of the Combines Investigation Act, had already been through the neighboring Vancouver Sun's newsroom, searching desks and seizing reporters’ notes. That was on January 11. Two days later, the same investigators went through the newsrooms of the CBC and BC Television. In every case, the federal men had search warrants issued under the Criminal Code and signed by a BC justice of the peace. What they were doing, they said, was looking for evidence to support allegations that members of the United Fishermen and Allied Workers had disrupted a December hearing of the Restrictive Trade Practices Commission in Vancouver. By ordering reporters who had covered the hearing to hand over their notes, the agents, who work for the federal Department of Consumer and Corporate Affairs, were forcing the journalists to supply evidence, whether they liked it or not.

Weeks later, over a beer at the Newsmen’s Club of BC, Eberts lamented his acquiescence and suggested he had let his colleagues down. His spirits weren’t improved by the knowledge that his desk held nothing of value to the agents and that his own managing editor had ordered him to submit to the search. “I thought it was just another piece of bureaucratic b.s.,” Eberts said, adding that the Province seemed anxious to cooperate. “It was the company lawyer waving the warrant at me, not the

investigators. For a minute there, I thought he was one of them.”

Eberts was not the only one to decide, after reflection, that “something important has been violated.” Four days after its newsroom was raided, the Sun admitted in an editorial that it had erred by letting the investigators proceed “without exhaustive challenge.” In doing so, the Sun said, it had “exposed itself and other Canadian newspapers to a dangerous threat to freedom of the press.” To most journalists the issue was clear: how many people, important or otherwise, would talk freely to the press if every word they uttered, whether for publication or not, might wind up in the hands of federal agents?

Immediately after the raids, Don Hunter, president of the local newspaper guild, criticized management at both papers for failing to challenge the warrants promptly in the courts. So did the Sun s waspish columnist, Allan Fotheringham. In what appeared a belated attempt at recovery, the two newspapers this month prepared to launch a class-action suit in the hope of having the warrants ruled invalid. They were likely to be joined by BC-TV and perhaps even by the CBC, which as a federal Crown corporation was unsure whether it needed government permission to sue Ottawa. The various lawyers had yet to decide which of several possible courses to pursue, but if the suit went ahead it would be an unprecedented cooperative legal effort by competing media outlets.

Sun publisher Stuart Keate pressed hard for the lawsuit, perhaps because he felt his paper had mishandled the affair. “We should have gone to our lawyers and said, ‘Look, how do we handle or resist this?’ ” Keate says.

While observers, including columnist

Fotheringham, harbored dark suspicions that the BC raids were just one more facet of a federal conspiracy to harass the press, others gloomily noted that the public seemed blithely unconcerned. Cameron Bell, news director at BC-TV, was skeptical that anything positive would be achieved by a lawsuit. He summed up: “Of course, the ultimate loser in all this is the good old public’s right to know. But if you held a right-to-know rally and invited the public you could hold it in a phone booth. No one out there gives a damn.” JUDITH TIMSON 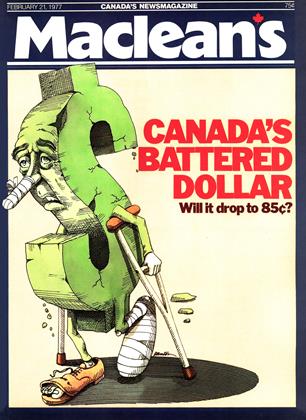