I was disappointed to read The Inquisition Is Alive And Well And Living In Newfoundland (December 27) which was so reeking in prejudice.

The Catholic church in Newfoundland can well be described as a significant number of Newfoundland taxpayers grouped in a distinct constituency. These taxpayers have chosen to exercise a basic human right of parents—the priority of choice in deciding the kind of education their children will be given. We believe that education involves values. Catholic parents expect the Catholic school to exemplify Catholic values: the values of Christ as portrayed in Catholic tradition. This is hardly a secret. It is not the least bit inquisitorial. A teacher in a Catholic school is expected to further the publicly declared objectives of the school. It is a simple matter of personal integrity. If a teacher does not accept these goals he should not apply for work in a Catholic school. If his own philosophy evolves along divergent lines to the point where it is incompatible with the philosophy of his school, he should in all honesty leave it..

The singer, not the song?

I would like to clear up a misunderstanding on why Gregory Baum left the active priesthood (People, December 13). In a recent letter, Baum wrote: “Since I have been unable to resolve a difference with my religious order for almost a year and since several attempts to join a diocese have been unsuccessful, I have decided, after long reflection, to resign from the ac-

tive priesthood and to petition the Holy See for laicization.” In addition he adds: “This does not alter my dedication to Catholic theology and Catholic renewal.” ROBERT HÈTU, WATERLOO, ONT.

Sins of omission are just as serious

Three For The Show (November 29) exemplifies the condescending attitude of Toronto’s media mobsters toward the Maritimes. In this story Barbara Amiel states: “Everything about (Peter) Herrndorf was right: from the schools he attended (Ridley College, University of Manitoba, Harvard Business School) . . .” Those responsible for researching the educational background of Hermdorf must have discovered that he had studied for three years at Dalhousie University in Halifax and that he graduated from the Dal Law School in 1965. By her obvious omission of any reference to Hermdorfs Maritime education is Amiel suggesting that, as a school, Dalhousie University does not fill the requirements to qualify in the “right” category? If this is the author’s contention, I would suggest that not only Maritimere, but thousands of Canadians across the nation, would disagree.

Summation by the defense

Blood Money: What Red Cross Donors Didn’t Know (December 27) by Joseph MacAnthony contains some inaccuracies both of fact and inference. Maclean’s says: “The Red Cross angrily contends that at the end of 1973 Connaught exported $200,000 worth of serum albumin (a component processed from plasma and used to treat burn victims) at a time when Cana-

dian hospitals were desperately short of the material.” Both MacAnthony and Maclean’s Senior Editor Robert Miller were informed that Connaught’s export was a bulk intermediate powder and was not the finished serum albumin which was in short supply. In fact, the material exported was in significant surplus in Canada; and the export of this semi-finished material in no way adversely affected Connaught’s production of finished serum albumin. It was for these reasons that the Red Cross, as the article pointed out, approved the exports in advance.

You refer to Dr. Andrew Moriarity as a former vice-president of research for Connaught. Dr. Moriarity was never an employee of Connaught. His assignment as a vice-president of Connlab Holdings Limited, from which he was discharged on August 2, 1974, did not include any direct involvements or responsibilities relative to Connaught.

Alun Davies is correct in complaining that the word “serum”ought not to have been included in the sentence he cites from the first paragraph of the article. (The powdered albumin is made into serum by the addition of distilled water.) There is no doubt, however, that the then new director of the Red Cross transfusion service, Dr. Roger Perrault, was incensed that any albumin was being sold abroad at the time in question. Davies’letter, which has been abridged, contained several other complaints about various Red Cross statements and claims. These might be better made to the Red Cross authorities.

Subscribers’ Moving Notice How to read your Expiry Date Name I I I'm moving. My moving date is_ My old address label is attached. My new address is on this coupon. (Allow 6 weeks for processing) New Address □ I would like to subscribe to Maclean's. Send me 26 issues for $9.75 ($14.75 outside Canada) City I I Please bill me EH I enclose $_ 1. the Circle top the codeline last five of digits the adin dress label on the cover. 2. The first 2 digits indicate Prov. Postal Code the year of expiry, i.e. 77 means 1977. Send to: Maclean's ATTACH 3. The next 2 digits indicate Subscription Department, OLD ADDRESS LABEL the issue of expiry, Box 9100, Postal Station A, i.e. 26 is the 26th issue. Toronto, Ontario, M5W 1V5 HERE! (The fifth digit is not used.) Thus, this sample subscription expires with the 26th issue of J99 1977.

Better things to do with our space?

There is so much to be commended in the rehabilitated Maclean’s that I hesitate to be the one to carp. But, I fear that some of your writers suiter from a dysentery of words. I doubt whether a seven-page article on an American television empire ( Exit Laughing, December 27) has a really credible place in a Canadian newsmagazine: however well or fully

The words are familiar—too familiar

The philosophy of life of Dr. Lise Fortier (Interview, December 27) closely resembles that of Dr. Arthur Guett, who became Director of Public Health in Nazi Germany. One of his profound statements was: “It is the supreme duty of the national state to grant life and livelihood only to the healthy ... in order to secure the maintenance of a hereditarily and racially pure folk for all eternity.”

Dr. Lise Fortier discussed the possibility that handicapped children be allowed to die. She said: “Children have a right to live in the normal way . . What, then, is the normal way? Who will dictate these standards of normality?

She goes on to say that children have a right to happiness. Does she feel that handicapped people cannot be happy? If so. 1 would say she has not been very observant. Dr. Fortier cites the example of spina bifida victims in England. Long Suffering by Caroline Crimp in She magazine (October) discusses the hospitalization of handicapped children. In light of this. Dr, Fortier’s logic disintegrates. She did say that children have a right to be happy. Hospitals described in the article can create such happiness. Yet Dr. Fortier apparently would deny this right merely because of cost. How can the happiness of children be prohibitively expensive when the purchase of the potentially obsolete Orion AntiSubmarine and Search Aircraft is not?

No doubt Dr. Lise Fortier is extremely knowledgeable in her specialty of gynecology and obstetrics. However, it is unfortunate that she strayed into the field of genetics, making some statements that were far from accurate.

In Canada»today there are almost 2,000 known cystic fibrosis patients, of whom some 200 are aged 20 or more. They are not “tied to their hospital beds,” always having oxygen, nor would most of them agree that they “lead a very miserable life.” There is not an upper age limit of 21, 22 or 23, as might be inferred from Dr. Fortier’s statement. Many of these adults with cystic fibrosis of the pancreas live fulfilling, rewarding lives and are valuable and successful members of society, making a worthwhile contribution to the Canadian

scene. Reports from employers, teachers and others who have dealt with individuals with cystic fibrosis affirm that intellectual functioning is highly developed. As a group, they are particularly motivated to excel scholastically and to demonstrate ability in their jobs or careers.

The wind seemed a bit too foul

researching information on topics they believe will sell magazines rather than inform the public. His pronouncements on poverty, politics, and national economy in Jamaica appear to be written from the point of view of someone interested in instilling fear in the heart of the tourist.

Some of his facts are incorrect—and if not incorrect, at best taken out of context. He claims that the “slums” and “shantytowns” of Kingston are peopled by migrants from the country who, upon not finding any work, turn to guns and violence or hustling the tourists. What he fails to point out is that the young men who constitute the overwhelming majority of

unemployed tend to be urban born rather than rural migrants and that those moving into the urban centres have much better employment records than the urban born. As to the numbers of shanty-town dwellers who own guns, he again fails to point out that to a great extent Jamaica’s upper and middle classes also possess firearms.

For Doyle, the Rastaman is equated with “good music and dope, bad rap.” This is especially taken out of context as the Rastafarian religion is based upon JudeoChristian teachings blended with a pride in African ancestry and cultural heritage. Ganja (marijuana) to the Rastafarian is like the wine sacrament in Christian teachings. It is not smoked to get “high” just as the wine is not consumed to get drunk.

Despite Holzberg’s knowledgeable background, recent figures show that Jamaican slums are heavily populated by migrants. We don’t doubt that upperand middle-class Jamaicans possess firearms; Doyle’s point was that the shantytowners used the guns to shoot political opponents and each othersomething that other classes, as a rule, don’t do.

The immortal words of Jimmy Richardson

After reading The Riddle of Nelson Small Legs (October 18) I feel that young Small Legs committed suicide due to frustration and exasperation from not being able to have a native representative in parliament and from the disunity of native peoples to join together as a nation.

The article brought to mind Always The Young Stranger (March, 1975) regarding an interview with James Richardson. He seemed to consider himself an authority on the native people of Canada. Richardson says: “The Indians and Eskimos? What did they ever do for Canada? Did they discover oil? Did they discover gas? They didn’t even invent the wheel. Why, when we came here they were still dragging things on two sticks.” I have done a lot of thinking on his words. What need had the Indian for oil or gas when he could step outside his abode and collect sufficient fuel for his needs? What need had the Indian for wheels, look at what it has cost the white man to build roads so his wheels can turn. Richardson would have been surprised at the number of things that could have been dragged on two sticks. My father often mentioned that we could travel anywhere in the forests without hindrance but after our forests were destroyed, we had only scrub and brush to contend with.

I have read many publications edited by Indians and I waited this long to see if anyone had noticed Richardson’s remarks in Maclean ’s. I felt it was time something was said. 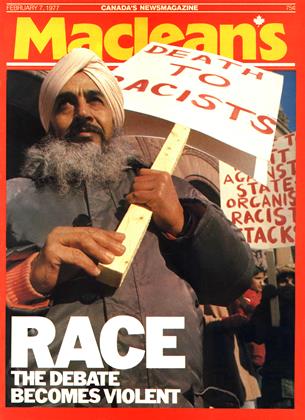