What all promising cities need is a few good literary feuds and so it is appropriate that Toronto, all puffed up with self-importance these days, is apprenticing also in the field of the literary sandbox. There is an air of Bloomsbury vendetta about, with practically each week providing new eviscerations, trampled reputations and crushed intellects for the delighted voyeurs, spattered with blood on the sidelines, to contemplate. The faculty clubs and the Toronto Press Club haven’t had so much fun since the last time Brendan Behan tried to throw a manhole cover over a Toronto cop car.

The city has been making reasonable progress in typewriter incest for some time, perhaps typified by the time jazz critic Jack Batten’s wife wrote a letter to the editor criticizing his housework, an exercise that amused all their friends and completely mystified the poor public. The art of literary assassination is an honorable one with a noble history but heretofore mainly restricted to the intellectual magazines that make it to the common room and not much further. What is interesting about the current trend is that the slashing and spearing is now going on out in the open in vulgar newsprint where the public can watch. It’s as bloody as hockey and much cheaper.

A star of the high sticking and boarding is quite the touchiest new author to appear in years. He is Conrad Black, a millionaire Toronto lawyer, owner of a string of small newspapers in BC, Quebec and PEI, who labored six years to produce a 743-page, $ 16.95 tome entitled Duplessis. Black is obviously quite proud of his exhaustive study and has reacted like a bull mastiff in heat to critics who attacked it. The Globe and Mail, with its well-known sense of humor, assigned Dr. Ramsay Cook, the York University historian, to the task and his verdict was at least clear-cut: “verbally inflated ... badly organized ... unjustifiably long ... a ramshackle volume.” The story is that within two hours of The Globe hitting the street a steaming Black was knocking on the home door of the publisher with his reply.

Black and Cook, it should be explained, do not like each other. There was a dispute going back to Black’s MA thesis and Black took the precaution of including a footnote in his book, in a phrase about “facile and fatuous” historians, to dismiss “the churlish flippancies of Ramsay Cook.” That, as it turns out, was mere warming up. In The Globe reply Cook became “a slanted, supercilious little twit” and on TV Black said he had “the professional ethics of a cockroach.” Good stuff! The city is at last taking on some of the true bitchiness of London.

Author Black is sensitive at a long distance. When another professor. Dr. Walter Young, reviewed his book in The Vancouver Sun as “absurdly long . . . disconnected ... superficial... a rehash of an MA thesis,” Black roared back with a public letter that had to be delivered in an asbestos pouch. Twenty-six of the 28 sentences in the review were “false,” he charged. He had never heard before of Young (who is a. Rhodes scholar, head of the political science department at the University of Victoria and author of a respected history of the CCF) “and do not expect to hear from him again.”

In such robust going it has not been a good season generally for academics. The next unfortunate victim was J. L. Granatstein, another York history professor, who relieved himself of a plaintive whine in The Globe that all these bothersome pop historians such as Pierre Berton, Barry Broadfoot and Walter Stewart were cheating the academics of their rightful grants and were producing “hasty, sloppy ... trivial pap.” Berton was accused of an intriguing crime in that he “consciously makes his work ‘interesting.’ ” The lofty professor sadly seems a trifle accident prone. He got the name of Stewart’s latest book wrong and in the same paper on another page was apologizing for an error he’d made accusing Sir Arthur Meighen of accepting a slush fund. Berton, of course, closed in for the kill, writing, “Well, professor, I sure as hell don’t consciously make [my work] dull.” Stewart zeroed in all the way from Washington, DC, reminding Globe readers that this wasjust another of Granatstein’s “hasty, trivial, sloppy and demeaning exercises.”

Cook and Granatstein are brutes for punishment. Our next catfight involved a double teaming job on Bernard Ostry, the famed Ottawa infighter and no mean man himself in a high-level dictionary battle. Cook did a savage job on The Age Of Mackenzie King, the 22-year-old book by Ostry and Harry Ferns that has been reissued. The main thrust of the Cook piece seemed to be envy that Ostry wore elegant clothes. There was an artful left jab in closing that Ostry, so critical of the devious King, in fact followed his route perfectly—an ambitious lad who went to Ottawa as a humble civil servant, fell in with Liberals, acquired an estate in the Gatineau and gradually took over the country.

The witty Ostry (if he had not existed, F. Scott Fitzgerald would have had to invent him) does not let the fact he is now head of the National Museums deter him from tossing off the line that King was “on the take until the day he died.” Granatstein promptly attacked, charging there was no proof. Ostry pointed out that the prime minister of 20 years came from a modest family, spent 40 years in public life while being a favorite of such as the Rockefellers, and died a millionaire. How come?

The indefatigable Granatstein fought back with mutterings about this reprinted book that he had bought cut rate in 1961; Senator Eugene Forsey attacked the professor for the Meighen goof; publisher James Lorimer attacked him for the reissue slur and at last count Ostry was contacting a man who claimed on a Vancouver hot-line show he had proof King had been a homosexual.

All of this is without mentioning the most artistic surgery of all—the job done by Dalton Camp on the second volume of the Diefenbaker memoirs. It was one of the longest reviews ever allowed any reviewer—more than half a page. For Camp it was obviously a labor of love, for the reader even now a collector’s item.

The word is about that the reason for the long delay in the second volume of Camp’s own work is that he’s going to outwait Dief, hold off until the third and last volume is sealed and then get even. Cook, Granatstein, Ostry, Berton and Stewart of course will be in on the kill for that one, too. We’ll even have to recruit Black. His uppercuts are too good to waste. 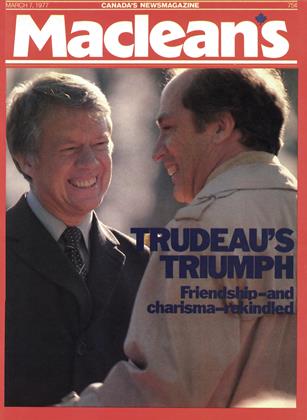