The media talk about the'public’s right to know,' then act as if it’s a privilege Allan Fotheringham April 18 1977

One of the vast amusements of the Western world is sitting around conventions listening to some of the flaky resolutions that emanate from the foreheads of the semisozzled conventioneers, just in off the Greyhound, as to how to solve the problems of mankind. So there was a great ripple of amusement rising from the press pews at the Constellation Hotel in Toronto during the Liberal policy conference at an idea that was designed to vault the Grits forward into the post-Orwellian era.

The resolution, received heartily by the faithful on the hard chairs, would see to it that the expense account elite of the Ottawa Press Gallery be indentured, like some early bit actors out of Roots, to serve several years in the boondocks of the nation. The scribes having their prejudices recycled, as it were.

A jolly good idea, as a matter of fact, with about as much chance of achieving life as the conversion of the Liberals into a sincere belief in freedom of information. The suggestion, naturally, caused large merriment among the entrenched aristocrats of the gallery, who grow nervous once outside an 18-mile circumference of the parliamentary dining room’s subsidized meals. It is impractical, of course, to separate the national press from the lair where their sources are dug in. It is the same in any national capital—London, Washington, Moscow—the journalistic cognoscenti piled on top of one another in a degree of incest surpassed previously only by some of the nesting among Kentucky hillbillies. (In such Dogpatch surroundings, the products of incest often emerge with six fingers or three toes. In the journalistic variety the product is interchangeable copy born from self-induced rumors.)

What makes Canada different (and what arouses such resentment in the delegates from the deep bush) is that in other such lands the national capital at least is a major, civilized centre. But Ottawa is such an ingrown repository of middle-class minds that the national press, perforce, is off in one insulated backwater, safe from the ferment of what is really going on amongst the unwashed taxpayers. It is as if the U.S. capital were in Terre Haute, the British one in Bognor Regis, the Russian one in Omsk. No wonder the goofy resolutions on a compulsory press Ferris wheel spring from the paranoia of the Liberal mind.

While all this must be left to Queen Victoria’s guilt complex, there is one aspect of press portability that is worth examining. It is the peculiar reluctance of the Quebec

press, especially in this hour of our peril, to venture into the rest of Canada. It is doubly puzzling because the reverse problem has now been solved. Since the Quiet Revolution 15 years ago awakened the rest of Canada, the English-language press has repaired the neglect it once showered on Quebec. All the major papers, through the FP chain, the Southam chain, The Toronto Star, now have men stationed in Quebec. Robert McKenzie of the Star consistently supplies some of the best interpretive reporting in the country. Richard Cleroux of The Globe and Mail has deservedly just

won a national newspaper award for his reporting from Quebec.

On the other side of the two solitudes, there is a strange vacuum. The Quebec papers act as if Canada ended at the Ottawa River. Does Roger Lemelin’s fat and prosperous La Presse station a correspondent in Toronto, let alone western Canada? Never. I asked Lemelin about this one day and he said he didn’t think his readers would be interested. Are newspapers put on this earth to lead or to follow? At Le Devoir, the respected Claude Ryan says he has senior editors who have never been to either Toronto or Ottawa and probably never will venture there. All the more reason, one might suggest, for some regular comment from those forbidden plateaus.

Just as strange as the chauvinism of the French press has been the attitude of The Montreal Star and Montreal Gazette. The Star, a good, solid paper, doesn’t bother with a staffer in the west and relies on the

journalistic cop-out, the “stringer” who fashions a weekend mélange. Such a steady diet of ignorance of what is happening in the rest of Canada vis-à-vis Quebec resulted in a Star reporter traveling west after November 15 and discovering to his excited horror, as ifjust falling upon a rare plant disease on Mars, the celebrated Anglo “backlash,” otherwise known as the Corn Flakes box syndrome. It was the least secretive phenomenon ever discovered, but when you can’t bother with steady coverage such truths loom on the landscape like the Matterhorn.

The Gazette is also in a strange space. Just a few years ago, under the aggressive managing editorship of Denny Harvey (now hip-deep in the glue of CBC bureaucracy) and the publishing hand of Mark Farrell (the only publisher of a major paper to back the NDP in an election—while with The Windsor Star), The Gazette became a crusading paper. There was just one problem. The more awards it won for investigative reporting, the more the circulation slipped. The paper was offending its own constituency in Westmount (with that “Rhodesian-like mentality,” the famous phrase coined by Keith Spicer but adopted by René Lévesque). Under Ross Munro, The Gazette has become more settled and it is noted that Tim Creery, the editorial page editor, who is a social democrat, is leaving to found his own magazine. The Gazette does not seem destined for major probes beyond its own borders.

What I’m saying, in my own fumbling fashion, is that Quebec papers can afford to take a national view. What they lack is the intellectual leap required. It’s clear no one has gone much out of the way to explain to the Quebec reader over the years the puzzled-yet-sympathetic, hopeful-yetexasperated mood abuilding both to the west and east of that province. What keeps this country together is a denial of the natural geographic pulls—the craggy, taciturn Maritimers linked to New England—the money-grubbers of Toronto drawn to sophisticated soulmates in Cleveland and Pittsburgh—the Prairies looking south to their Henry Fonda-equivalents in the Midwest—the eccentric spin-off of BC eyeing the nutcake fringe of California. The communication strings binding the crazy place together east-west could be pulled a lot tighter.

The Prime Minister said the other day the main danger was not Quebec separatism but the animosities between the regions. The country has not grown up yet and neither have some of the newspapers. 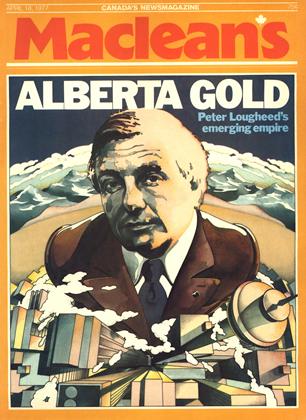