Among the two soap operas that have been playing in Ottawa, the more plaintive one has been the transmogrification of Jack Horner, the former hard rock of the Commons, into a nervous wallflower, before he finally joined the Liberals. It was a transition so unlikely as to be fascinating, the spectacle of a man with seams and veins of conservative orthodoxy making a fool of himself by flirting with the hated enemy, the party of mushy, middle ground opportunism. It was like watching the star virgin of a convent school meeting openly with the greasers in front of the local motorcycle shack. If they have to do it, one only wishes they would do their chatting up out of sight somewhere, where we would not have to watch the degrading spectacle.

The metamorphosis of the Gary Cooper of the Commons into an indecisive Don Knotts, however, should not deflect our gaze from the fact that the Horner wobbling is in a fine and honorable tradition of Canadian politics. Men staggering from principle to principle, like drunks in a motel hallway, have been a noble feature of our politics from the start. Politicians fleeing across the floor in pursuit of greener grass, their justifications trailing behind them, have been around forever.

One does not have to cite the celebrated philosophical meanderings of Paul Hellyer as the sole example. Hellyer’s lonely search in pursuit of his own destiny led him from Liberal cabinet minister to Action Canada guru (and possibly only member) to Conservative leadership candidate and established a sound base for perennial Press Gallery jokes. (Hellyer has gone to the Arctic. Why? To teach lemmings how to speak.)

Claude Wagner, of course, on his way from being a Quebec Liberal to an Ottawa Tory, went through an official cleansing purgatory on the bench, only to emerge today as a designated Joe Clark non-person. Like Mr. Hellyer, his search for the magic sword of Excalibur has led him only in circles.

Someone who has received more material considerations for his miraculous change of heart is Hazen Argue, the former CCF house leader in Ottawa. After advocating for 16 years the abolition of the Senate, Argue in 1962 jumped to the Liberals after he lost the NDP leadership race to Tommy Douglas. Four short years later, the lovely Liberals elevated him to the Senate, thus inspiring a memorable and bitter Commons speech by David Lewis: “We have made progress in our civilization. The 30 pieces of silver have now

become a half million dollars, which is what Mr. Argue has been paid for being what he was.” Argue was 45 at the time of his appointment and his Senate salary until the age of 75 at the then prevailing rate of $15,000 totaled $450,000.

It should not escape attention that Jack Horner, in his confusion as to his Crowfoot

fate, came to the right man to plight his troth. Mr. Trudeau, you will recall, was a good supporter of the CCFNDP. delighting in calling the Pearson Liberals “idiots” before he decided to join them. He also rewards other converts. Social Credit’s Bud Olson turned his back on his Alberta voters in 1967 and switched to the Liberal seats. Made agriculture minister, he was dumped by voters the next crack they had at him. Last month, a grateful Mr. Trudeau named him to the Senate. Students of shiftiness always evoke the magic name of Churchill, regarded in such circles as sort of the patron saint of itchy feet. The great man, from such a proud Tory heritage, was in active politics only four years before jumping to the Liberals. He wobbled his way through innumerable elections under such labels as Liberal Free-Trader, Independent Anti-socialist and Constitutionalist before finally emerging as a Tory again. “Anyone can rat,” Churchill muttered, “but it takes courage to re-rat.”

was once one himself, a vociferous one as a young man before he saw the light and converted. Was not Saul of Tarsus, now that you think of it, the first political convert on that road to Damascus? Dalton would love the analogy.

In between the two, there has been a long collection of claim jumpers. Thomas MacNutt, the famous household name from Saltcoats, Saskatchewan was a Liberal, Liberal-Unionist and Progressive. George Williams of Winnipeg Centre was a Liberal-Unionist, Conservative and then Independent. R. L. Richardson, founder of the Winnipeg Tribune, was a Liberal, Independent, Independent Conservative and Radical before his Commons career ended with his death in 1921. Bona Arsenault started out a Conservative in Quebec politics, failed to get elected to Ottawa as a Tory, succeeded as an Independent, then a Liberal MP and ended up a Liberal cabinet minister back in Quebec politics.

In the second Book of Samuel, was it not Amasa—son of David’s half sister who deserted his uncle and king so he could command the forces of Absalom? And thus it is fitting that in the sanctimonious world of British Columbia, politics could not function without sanctioned turncoats. Social Credit was formed and reigned for 20 years only because Wacky Bennett left the Tories and crossed the floor. He appointed the first woman in Canada to hold a full cabinet post, Tilly Rolston, who in turn was an ex-Tory, ex-Coalitionist and ex-independent before becoming a pseudo Socred.

Dr. Scott Wallace, the BC Tory leader, jumped from the Socreds. Half of Premier Bill Bennett’s cabinet is made up of recycled second-guessers from other parties. One of his Socred ministers, Dr. Pat McGeer, once wrote a passionate book detailing all the sins of Social Credit. When McGeer—the former BC Liberal leader— and two other Liberal MLA’S jumped to the Socreds just in time to make it into the cabinet, lone remaining Liberal Gordon Gibson said they reminded him of the old politician who announced to an election rally: “Those are my principles—and if you don’t like them I’ve got other ones.”

Jack Horner, the resolute man turned doubter, has not been alone in history. There was Pliable, in Bunyan’s Pilgrim’s Progress, an untrustworthy neighbor Christian. He accompanies him as far as the Slough of Despond, then backslides and deserts him. It has led, as you know, to the saying about a friend as reliable as Pliable. 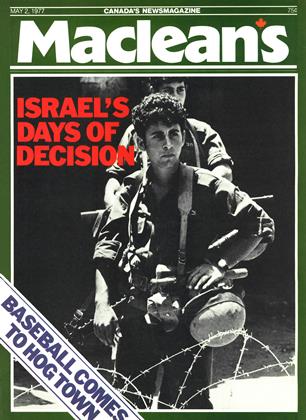