The joys of not being ‘meaningful’ BARBARA CANSINO,DAVID COBB May 30 1977

It’s not your average living room, but then Esther Warkov isn’t your average artist. Few living rooms feature a dentist’s chair, a horse’s skull, a stuffed hawk, and a turtle dove called Pax (whose father was eaten by a passing cat in the middle of the night): for Warkov it’s home, and this is where she works on her highly fantastical drawings— 40 of which are touring Canada and are now on view at the Alberta College of Art in Calgary through June 15.

Warkov, 35, is better known as a painter of large, surrealistic canvases which hang in major galleries and collections across the country and cost up to $6,000. These she paints, since she owns no car and cannot drive, in her garage—a fact that has excited repeated comment from those who expect all Art to be worked out in garrets. But about three months of every year W ar-

kov tears herself away and goes into the house for a change of pace: “I tell myself it’s time to do some drawings,” she explains. “They clear my head—and besides, the results are quicker.”

Until 1975 the drawings—in pencil, with touches of color—had never been publicly shown and few knew of their existence. One of the first was Carol Phillips, curator of exhibitions at the Norman Mackenzie Art Gallery on the University of Regina campus. Phillips was looking at the work of prairie artists for an International Women’s Year exhibition and happened to talk to Warkov about it. “Would you like to see my drawings?” Warkov asked tentatively. “Nobody else has.” Reports Phillips: “I was very moved by them— even more so than by her paintings. Esther had done only a few then but she planned more: as soon as she’d done 40 I thought it was time to let others see them too.”

What we see is quickly defined as surrealism—but not the classic, Dali-esque surrealism of dreams, and time, and Freud. Warkov is more romantic, more decorative, and informed—as all her work is—by intellectual high spirits. As with the paintings, her drawings can be enjoyed, translated and argued over to the viewer’s content—if not always to Warkov’s. In fact many take her work much more seriously than she does.

“When most people look at my work,” she says, “they want to know what the symbolism is—and the truth is I don’t have any. What I’m really trying to do is create an interesting fantasy world of human emotions, which is what a lot of surrealists did, like Max Ernst. I try for a more gentle, human approach.” Some of Warkov’s best and most typical work in the current exhibition is her series of drawings titled If Your Mother Was A Carburetor A nd Your Father Was A Fly, What Does That Make You? There are 10 of them, and they deliver exactly what the title promises—human, insect and mechanical forms, all wedded together with the highly evocative Warkovian logic. Many of them are also extremely funny.

Winnipeg-born, Warkov is the daughter of a Polish leather-wholesaler and a mother who is as quiet and retiring as Warkov is assertively caustic. Esther had her first show at the Winnipeg Art Gallery in 1964 when she was 22. Two years later she married Frans Visscher, a painter of abstract landscapes: Visscher, leaving the garage to his wife, paints upstairs. Warkov doesn’t socialize much and travels as little as she has to. North Winnipeg, that hothouse of such compulsive Jewish comics as David Steinberg and Libby Morris, has always been her home ground. She sees no need to leave it. “I like my street,” she says, small and gregariously cheerful. “What’s the name of that American writer who never left her house—Emily Dickinson? I’m like her. But I’m not a professional Winnipegger like Larry Zolf.” 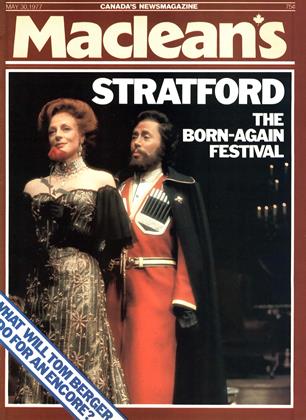