You know the 60-year-old Swede who’s fitter than a 30-year-old Canadian? To hell with him John Robertson June 13 1977

I don’t know how you spend your weekends, but I usually just set the automatic pilot on my easy chair, watch television, read a good book or two, and catch up on my cursing. As you might have surmised, I hate exercise. I refuse to do push-ups alone, on general principles. The closest I’ve ever come to lifting weights is opening my eyes every morning. I have this ritual I go through when 1 get up. I wash my face. Then I iron it. Then I daub a little Preparation H on the bags under my eyes. People who exercise regularly look like the picture of health. I look like the picture of Dorian Gray.

Maybe I’m in the wrong racket. Maybe I should have stuck to selling bunion boots to little old ladies whose toes point in conflicting directions or selling life insurance to office boys with postage-stamp tongues or selling Bibles door-to-door (don’t slam that door, lady. God is watching all this ... and He’s taking names).Sitting at a desk all day, writing and writing and writing, has rendered my body into such a deplorable state that the only item that still fits me from my old sports wardrobe is my Julius Schmidt pullover.

As much as I hate to admit it, I need some exercise desperately. I need to romp again through sylvan glades in my gold lamé sweat suit, feeling the melodic crunch of last autumn’s leaves under my size-12 sneakers, chugging along past the chickadees and having my ears caressed by the warble of the blue-eared pheasant and the mealymouthed snitch. Inevitably I look down and can actually see my stomach disappearing . . . because I am fainting. Then the cramps start, and then I step on my tongue ...

Naw, jogging’s for young dudes like Jack Batten. 1 hear he’s even started chasing cars. But how about cycling? Ah, now there’s a sport. The last trip I took on a bike was over the handlebars at age 12. My voice went up two octaves and stayed there. But cycling seems like such a socially obnoxious sport. I mean, would you date a girl who has just ridden 50 miles on a bike? Remember Torchy Peden? No, not the arsonist. The famous six-day bike rider. After his last six-day race, Torchy was lying on his back in hospital months later—with his legs still pumping furiously. Whenever there was a power failure, they’d just hook him up to the emergency generator and shout: “Okay,

Torchy. Big finish!” One of the advantages of being a six-day bike rider is that it gets you out of the house for almost a week at a time. The hours are fine, and at least it’s steady work.

Come to think of it, maybe a more passive game like golf would suit me better. 1 have been described on the golf course as the last of the open-shaft miners. Watching me play golf is like watching a guy unload a truckful of sod: when I swing a club my body moves in so many different directions that it’s like watching an octopus trying to make love to a set of bagpipes.

On second thought, maybe I’ll just settle for a sauna bath. It worked wonders for Maria Parsons of Santa Ana, California. In fact, she sued a California health spa for a million dollars after she was locked in a sauna for 30 minutes. No, she wasn’t so wrinkled that her husband thought she was an accordion, and thus seized her by the ears and manipulated her head in and out until she sang four verses of Blue Spanish Eyes. On the contrary, the doctor who examined her when she emerged from the sauna said he found her hysterical, incoherent and thrashing around. In other words, she was behaving much like the average housewife. But there was more, much more: ever since emerging from the sauna, she has been tormented—if you could call it that—by an irresistible urge to make love. And in suing the health spa, she said that the 30 minutes locked in the sauna had changed her from a normal housewife and mother of seven into a nocturnal wanderer... picking up dates, etc., especially etc. Meanwhile, the health spa has been inundated with calls from indignant husbands of other female members, demanding to know why their wives weren’t given equal time in the sauna.

Actually, at the risk of ruining my image, I must confess that I've been exercising vigorously for more than a week now. After two or three days, I was springing up all four flights of stairs to my office. Yesterday, I felt so good I climbed up the outside of the building. “How do I look now?” panted. “Like Tarzan,” said my secretary, “after he missed a vine.” 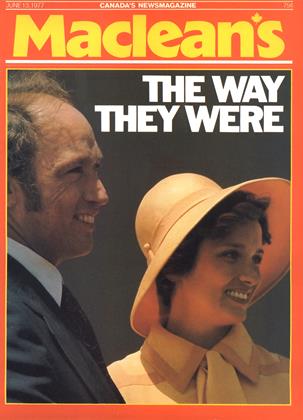