The nuclear generating station at Pickering, 20 miles east of Toronto, sprawls against the Lake Ontario shoreline, a bold affirmation of Ontario’s determination to push ahead with nuclear energy development. Inside, the plant’s 280 whitesmocked employees oversee the four 540-megawatt nuclear reactors which can provide enough power to supply 16.4% of the province’s total power needs. Says Robert Taylor, chairman of Ontario Hydro: “For us in Ontario, nuclear energy is the only option that can assure sufficient supplies of electricity to give us a prudent degree of self-reliance during the 1980s and Nineties. It is the best answer environmentally, economically and socially.”

But Ontario’s enthusiasm for nuclear power is by no means universally shared across the country, partly because of soaring costs, and Atomic Energy of Canada Ltd.’s $1.3 billion Candu reactor program

is beset by mounting problems at home and overseas. Now, the Candu program faces perhaps its severest body blow of all: Hydro Quebec’s grandiose plan to build as many as 20 to 30 reactors during the next 25 years has been quietly killed by the provincial government, partly in response to threats by English-Canadian politicians who say they would refuse economic association to an independent Quebec. In addition some Quebec energy strategists fear that reliance on Canadian uranium and nuclear technology would render the province vulnerable to energy embargoes imposed by Ottawa for political reasons. A Quebec energy policy to be released later this year will recommend concentrating on damming rivers, deferring for at least a

decade the province’s plans for atomic power. No nuclear development will be approved beyond possible completion of the Gentilly site near Trois-Rivières, where a second reactor is under construction, and Quebec’s still officially secret decision will deny AECL its biggest potential market outside of Ontario.

Elsewhere in Canada, the nuclear option is also running into problems. At one time, AECL had high hopes of constructing a reactor on Vancouver Island, a plan heartily endorsed by the Greater Nanaimo Chamber of Commerce. The program called for a 600,000-kilowatt power source, employing an operating staff of 135 and creating some 300 new permanent jobs in the community, but pressure groups on the island eventually forced the plans to a standstill.

On the other side of the country, Atlan-

tic governments are under pressure to buy Candu, but there is far from unanimous support for such a development in the region. Nova Scotia premier Gerald Regan is, at best, ambivalent toward it. Meanwhile, Prince Edward Island has come out more strongly than any other province against nuclear energy. Premier Alex Campbell and his ministers decided they wanted to opt out of the nuclear power program altogether and concentrate instead on developing renewable energy sources, such as wind and sun.

But it is the loss of the Quebec market that would be most serious for AECL. A spokesman for federal Energy Minister Alastair Gillespie declined comment on the Quebec move, but noted that it was not a complete surprise since his provincial counterpart, Guy Joron, had opposed nuclear power well before he became a Parti Québécois minister. The spokesman added that a pullout by Quebec from the program would damage AECL’S campaign. Quebec’s decision not only denies AECL its biggest potential market outside Ontario, it means the Crown corporation will have still another embarrassing setback to add

to its list, a list which already contains such mini-scandals as accusations that payoffs were used to promote foreign sales and the diversion of Candu waste by India to fabricate an atomic explosion. Critics of Candu say its spread into other areas of the world will lead inevitably to similar incidents elsewhere. The Quebec move will also leave AECL with the partially built La Prade heavy water plant at Gentilly, which was ordered in anticipation of a massive Quebec commitment to Candu. If AECL does not decide to abandon La Prade voluntarily, the PQ government apparently is so intent on pursuing its freedom-fromOttawa approach that it will intervene and demand that the federal corporation remove the installation. A provincial permit to operate the heavy water plant has not yet been issued because AECL has not delivered the required environmental study to the province and Quebec officials claim to have discovered that AECL’S choice of site, only two miles from the 3,000 residents of Gentilly, is a contravention of guidelines drawn up by the federal Atomic Energy Control Board.

nitely order AECL to take its heavy water hardware out of Quebec when the province officially announces its renunciation of nuclear energy. Adds Joron: “Such a plant includes eventual dangers for the population equal or superior to those of a nuclear reactor. It is not my intention to permit the completion of a plant whose production would be exported, consume an important share of energy and profit only the other provinces.”

Nevertheless, it would take a lot to kill the Canadian nuclear program outright. In the first place, the bureaucracy in support of the system is well-entrenched in Ottawa, not just at AECL but also inside the energy department. Secondly, there is a kind of stubborn pride in Candu, a Canadian developed reactor that is the country’s most significant—albeit costly—technological achievement. And finally, there is serious concern over energy supply and the nuclear program, given Canada’s technology and abundant uranium resources, acts as a comforting backstop in case the oil wells run dry before anyone is ready. 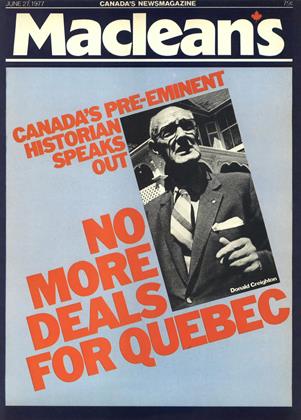